اقرأها بالعربية
The who, what and where of the Bahariya Oasis attack 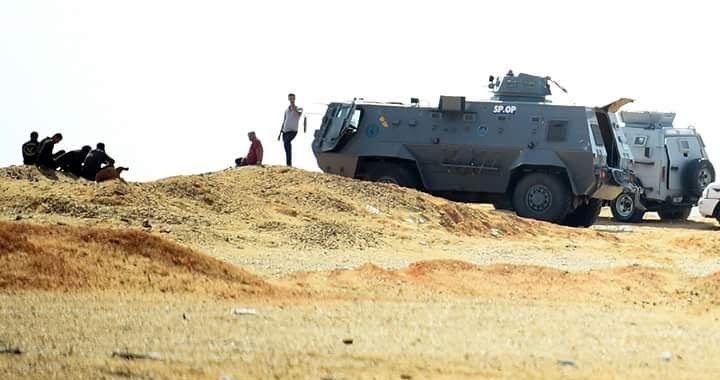 The facts about the clashes that took place between security forces and armed militants in the Western Desert near the Wahat Road, 135 km outside of Giza, remain unclear due to the scarcity of information, even after the Interior Ministry issued two statements on the attack 18 hours apart.

The first statement came on Friday and acknowledged the event, without referring to a death toll.

The second statement came on Saturday, when the ministry announced the death of 16 police officers: 11 commissioned officers, four conscripts and one enlisted officer. The statement added that security forces were searching for one missing officer, who was among the attacked force, while 15 militants had been killed.

The official tally is inconsistent with statements from security sources who spoke to Mada Masr and other media agencies, including the BBC and Reuters, since Friday, all of whom estimated the death toll at over 50. The State Information Service has since issued a stern rebuke to the BBC and Reuters, saying that the news outlets had “[disregarded] official statements and even [manipulated] them.”

Against the backdrop of the still emerging details of the clashes, Mada Masr has put together some of the most important lingering questions and the available information in an attempt to answer them.

The clashes broke out in a desert area at a point near the Wahat Road, 135 km from Giza, according to the Interior Ministry’s Friday statement.

The Wahat Road connects Giza to the Western Desert Oases and is 565 km long. The portion of the road near where the clashes took place falls under the administrative jurisdiction of the Giza Governorate, while the rest of the road rests in the territory of the New Valley Governorate.

There have been several attacks in the Western Desert against security forces in recent years.

In July 2014, militants killed 21 border control officers in an attack on a checkpoint in Farafra.

In September 2015, a military airstrike mistakenly targeted a tourist convoy, while pursuing militants in the Farafra Oasis Desert close to the Wahat Road. Eight Mexican tourists and four Egyptian nationals in the tourist convoy were killed in the airstrike.

In January 2017, militants attacked the Naqab checkpoint, which falls in the Western Desert between the Upper Egyptian city of Assiut and the New Valley, killing eight police officers.

In May 2017, militants attacked a bus carrying Copts heading to a Coptic monastery in a desert road west of Minya killing 29 people. The Islamic State claimed responsibility for the attack, and, five days later, a suicide belt that had been abandoned by militants detonated, killing four soldiers as they were patrolling an area in the Western Oasis area, according to a statement by the Armed Forces.

The Armed Forces responded to these attacks with airstrikes on the Libyan city of Derna, in addition to strikes in Jufrah, where the Libyan National Army headed by Egypt’s ally General Khalifa Haftar was conducting an offensive at the time. 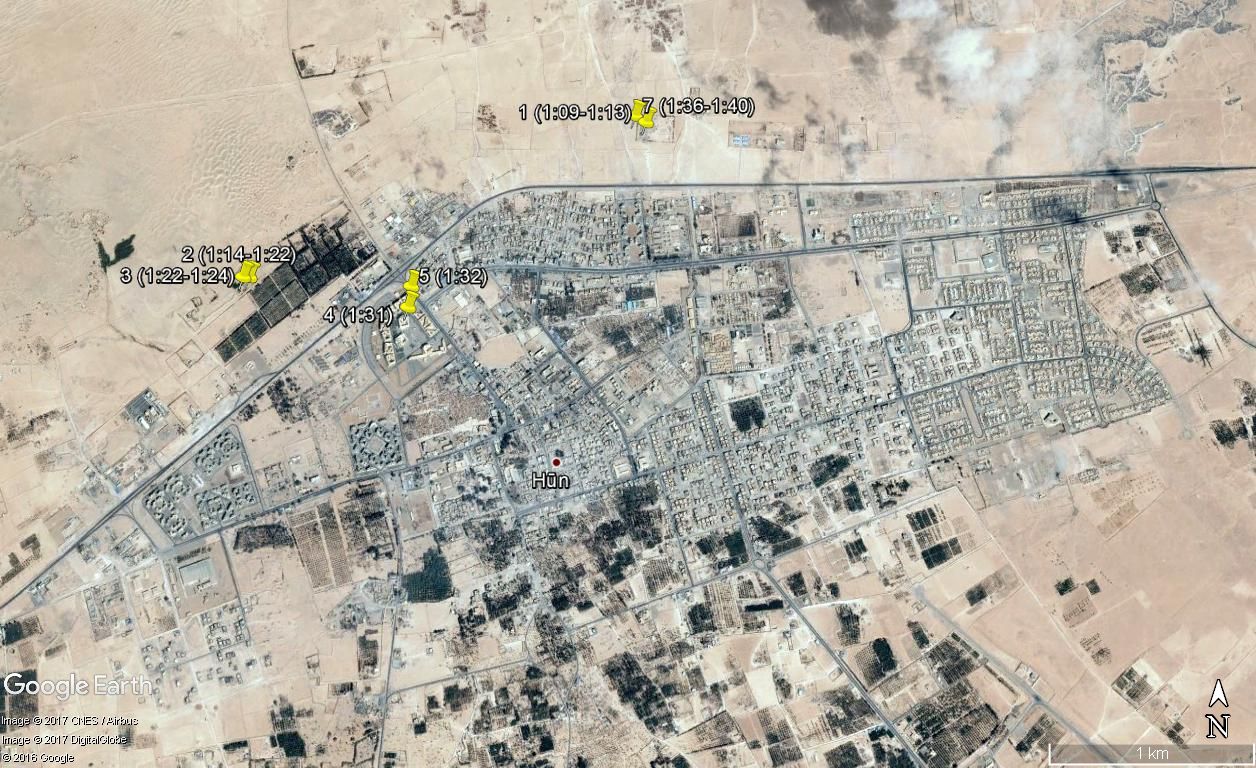 The six geolocated Egyptian Air Force airstrikes in Hun, Libya. The numbers refer to the sequence of explosions shown in the Ministry of Defense video, with the timestamp included between brackets.

While most of the previous operations carried out by groups affiliated with the Islamic State or Al-Qaeda in the Western Desert took place close to the Farafra Oasis – which is located more than 600 km west of Giza – Friday’s attack was on the eastern side of the desert, considerably closer to Giza.

According to the Interior Ministry’s statement on Friday night, the security forces were attacked after they were dispatched based on intelligence regarding a militant cache. The same information was reiterated in the statement published on Saturday, which stressed that there was “intelligence,” without specifying the group that the forces were targeting or the source of the intelligence. Saturday’s statement added one further detail: There were two patrols involved in the clashes, one from Giza and another from Fayoum, and one officer remains missing.

There were conflicting reports on the identity of the group targeted by the attacked patrols. Sources told Reuters that the forces were on their way to raid a hideout for the Muslim Brotherhood-affiliated Hassm group. While “senior security officials” told Masrawy that the attack was carried out by a group led by Hesham Ashmawy, a former special forces military officer and the leader of the Al-Qaeda affiliated Al-Mourabitoun group, who, discharged from the Egyptian Armed Forces went to fight in Syria, and then returned to Egypt to carry out militant operations. Unconfirmed information indicated that Ashmawy had moved to Libya.

Ashmawy faces official charges for leading the attack on the Farafra checkpoint in July 2014 and for the attack on Central Security Forces in Arish in January 2015, in which 29 people were killed. Judicial sources have told the privately owned Al-Masry Al-Youm newspaper that the National Security Agency, in light of Friday’s attack, has requested an arrest warrant for Ashmawy and his affiliates who they assert crossed into Egypt from Libya.

There have been several security operations  against Hassm in desert areas since last July, based on intelligence that training camps were located there.

On July 23, the Interior Ministry announced that security forces killed eight leading Hassm members in an exchange of fire, after forces raided a training camp in the Fayoum desert, close to the location of Friday’s attack.

Previous attacks indicate that Hassm’s desert operations are closer to the Nile Valley, while the Islamic State and affiliated groups operate closer to the Egyptian-Libyan borders in the west of the country.

The human and logistical scope suggested in Friday’s attack suggests that a large group is behind it.

Horaas al-Sharia (Sharia Guardians), a social media account with links to Al-Qaeda, celebrated the success of the operation in a post on social media channels affiliated with the Islamist group on Saturday, suggesting Ashmawy’s proximity to the attack.

The group made has not made public statements before. However, it carries a name close to another group, Ansar Al-Sharia (Sharia Allies), which claimed responsibility in March 2014 for attacks that left 28 police officers in Sharqiya, Giza and Beni Suef.

The Interior Ministry justified the delay of its second statement by referring to a desire to “verify information,” in order to avoid “negatively affecting the operations and morale of forces,” but the second statement disclosed a limited account of the events.

According to the statement, two patrols were deployed from Giza and Fayoum to raid an undisclosed target in the area. As the first patrol coming from Giza approached the targeted location, militants opened heavy fire on them. The statement stated that the exchange of fire continued for several hours, leading to the death of 16 police personnel, without clarifying what happened to the patrol coming from Fayoum.

General Mohamed Sadek, the former deputy interior minister, gave a television appearance on Friday in which he provided some details on the security forces attacked by militants, information that he said he collected from police in the area. According to Sadek, the militants opened fire on the units from a high point, as they went through a low valley.

The former official said that the militants used RPGs as well as missiles to target security forces. He added that the group that was to be targeted in the planned raid is affiliated with Ansar al-Sharia and had come from Libya through Egypt’s western borders.

Sadek added that security forces accompanied an arrested member of the group on the operation to guide them to the rest of the militants. Sadek said that the informant gave forces enough information to make his account credible, including details such as the type of food brought in for the militants from the city of Qalyubiya.

A security official also told BBC Arabic that forces were hit with missiles and grenades, and that the militants “were well acquainted with the area, while the forces were not able to call for land or air reinforcements due to the bad connection in the desert,” a fact that was corroborated by a security source that spoke to Mada Masr.

AD
You Might Have Missed
Mugamma revisited: Reimagining the building and the square
Where do old lesbians go to die?
Carbon Colonies & A Green New Deal
What we talk about when we talk about trees
AD
Mohamed Hamama
84 articles on Mada

Topics
Related
police deaths
Who was behind the attack in the Bahariya Oasis?
Omar Said | Official sources've offered little information and no group's claimed responsibility for the attack
Amr Saad
Update: Over 50 police officers killed in clashes with militants in Bahariya Oasis
14 confirmed and 20 reported policemen killed in clashes between Armed Forces and militants in Giza
Air Forces
What really happened in the Western Desert?
Isabel Esterman | Confusion reigns over the circumstances of a mistaken military airstrike on a convoy of Mexican tourists