اقرأها بالعربية
Who was behind the attack in the Bahariya Oasis? 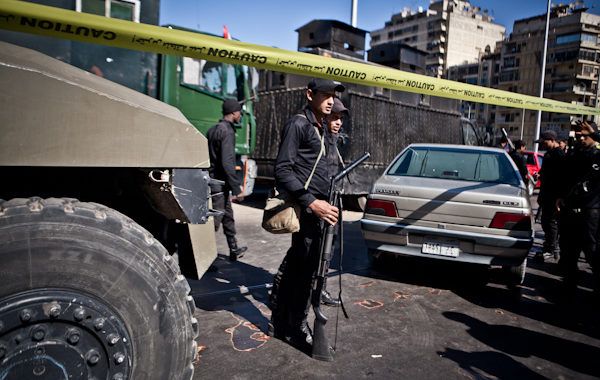 After news began to spread that clashes between militants and police forces had broken out near the Wahat Road 135 km outside Giza on Friday, which, according to a security source that spoke to Mada Masr, left over 50 security forces officers dead, speculations arose regarding the group behind the attack.

Mobilization by security forces is believed to have stretched into the night, but, one day after the news broke, the cloud of uncertainty surrounding the attack is yet to be pushed aside. For one, the Interior Ministry’s official tally is inconsistent with statements that a wide range of security sources have given to various news outlets since Friday, which put the death toll at over 50. Before the Interior Ministry’s statement was released today, the Associated Press cited security sources to report that the death toll among the police had risen to at least 55.

What did come out in the Interior Ministry’s statement on Saturday was a very different picture of scale: 11 commissioned officers, four conscripts and one enlisted officer had been killed. This is in addition to the ministry’s assertion that security forces were searching for a missing officer who was among the force attacked in Bahariya. In equal measure, the statement said that 15 militants had been killed in the firefight.

The party responsible for the attack still remains an unanswered question.

There are similarities between the Friday attack and previous operations led by jihadist leader and former military officer Hesham Ashmawy, a semblance that has led some to believe that the attack could mark his return. These speculations were buoyed when Horaas al-Sharia (Sharia Guardians), a social media account with links to Al-Qaeda, celebrated the success of the operation in a post on social media channels affiliated with the Islamist group, suggesting Ashmawy’s proximity to the attack.

Other speculations center on whether the attack was the work of the ISIS-affiliate Soldiers of the Caliphate, who are also known as the Amr Saad Group and often described as Egypt’s ISIS.

A less likely probability but one that has been floated is the militant group Hassm, despite the substantial differences between this operation and the group’s usual modus operandi.

Who is Hesham Ashmawy?

Hesham Ali Ashmawy Mosaad Ibrahim started out as an officer in the ground and special forces. He was transferred to an administrative role after investigations by military intelligence into an incident involving Ashmawy and a mosque imam who reportedly made a mistake while reciting Quran.

However, Ashmawy’s extremist tendencies persisted — he continued distributing handbooks by Salafist sheikhs to his colleagues in service, which led to the termination of his military career, following a military trial in 2012.

Security intelligence reported Ashmawy’s travels to Syria in 2013 and his participation in the Syrian war with Jabhat al-Nusra, which was at the time affiliated with Al-Qaeda.

A few months later, Ashmawy’s name started circulating amid an increase in militant attacks in North Sinai and Delta governorates, especially Cairo and Daqahlia. His role in Ansar Beit al-Maqdes was apparent before the group pledged allegiance to the Islamic State.

The most blatant sign pointing to Ashmawy’s involvement in the escalating operations in Egypt came after the failed assassination attempt of former Interior Minister Mohamed Ibrahim in September 2013. The day after the failed attempt, security forces reported a raid on Ashmawy’s residence in Nasr City, on the basis that he was using a mosque owned by his family to propagate extremist ideas. Forces raiding his residence reportedly confiscated ammunition and documents that prove his involvement in the assassination attempt.

At the time, there were speculations that Ashmawy was responsible for organizing Ansar Beit al-Maqdes activities in the Delta and Nile Valley, where attacks against police officers, security directorates, and military posts had escalated.

Ashmawy faces official charges for leading the attack on the Farafra checkpoint in July 2014, which resulted in the deaths of at least 21 soldiers, and for the attack on Central Security Forces in Arish in January 2015, where 29 people were killed.

During this period, conflicts between Ashmawy and Ansar Beit Al-Maqdes began to surface. The group claimed responsibility for the Farafra operation in a video and announced that another video would be released with footage of the operation.

Weeks later, a new video was released containing footage of several operations, but not the attack on the Farafra checkpoint. The two videos pledged allegiance to the Islamic State and announced that the group had changed its name to the Province of Sinai, leading Ashmawy to cut ties with the group.

Ashmawy resurfaced in a 2015 video, giving himself the name Abu Omar Al-Muhajir, and claiming responsibility for the Farafra operation. He announced his new title as head of a new group: Al-Mourabitoun, the persistent.

Afterward, there were speculations that Ashmawy had been injured in the Farafra operation, and that, after splitting from Ansar Beit al-Maqdes, he moved to Libya for treatment, taking part in the meanwhile in operations there and overseeing training camps.

Ashmawy’s name has been out of circulation since, until the Friday attack in Bahariya Oasis, his operations in the Delta and Nile Valley being assumed by a different group: the Soldiers of the Caliphate.

Soldiers of the Caliphate

In May, Al-Nabaa, a magazine issued by the Islamic State’s media arm, published an interview with someone they described as the leader of the Soldiers of the Caliphate in Egypt. The interview indicated that the Islamic State had an independent branch operating out of Sinai that was not affiliated with or under the command of Province of Sinai.

Concurrent with the interview, the name Amr Saad started circulating in a way that led people to believe that he was the leader of the new group.

In the interview, the anonymous leader was quoted as saying:

“We [the Province of Sinai] are tied with the Soldiers of the Caliphate by brotherhood, love and allegiance (…) we are all soldiers of the Islamic State in the lands of Egypt and Sinai (…) the targeting of churches is part of our battle against non-believers (…) and we say [to Christians] that the stipulations of God and his Prophet are applicable to you, and that you have three choices: converting to Islam, paying jizia [a sum of money collected by the Islamic Caliphate from non-muslims], or going to battle.”

In the months preceding the interview, there was a dramatic surge in militant attacks targeting Copts in Egypt, including church bombings in Abbasseya, Tanta and Alexandria, as well as the kidnapping and killing of Copts in Arish, which led to a mass displacement of Copts in Sinai.

The interview answered questions that had been looming since the targeting of the historic St. Peter and St. Paul Coptic church in 2016, that centered on whether the Islamic State had infiltrated Cairo, and whether they had separate cells operating in the Delta, or whether a new IS-affiliated group had been operating outside of Sinai.

Following the revelation of the identity of the Abbasseya church suicide bomber, security forces made several arrests, including that of Omar Saad, who was transferred to the Aqrab Prison, an infamous maximum security sector in Tora. Those arrested confessed that Omar’s brother, Amr Saad, was responsible for managing militant cells in the Delta and Nile Valley, and that he was the mastermind behind the cathedral attack.

The ministry held Saad — identified as the brother-in-law of Mahmoud Hassan Mubarak, the executor of the Alexandria church bombing — accountable for the militant cell responsible for the church bombings and the attack on the Minya bus in May carrying worshippers to a monastery.

In recent months, the Interior Ministry carried out several raids in Upper Egypt, in pursuit of members of the group which has come to be identified as the Amr Saad group.

The raids followed the arrest of Eid Hassan Eid, a member of the group, on August 3. During interrogations, Eid revealed vital information about the group, their armaments and training sites, and confirmed Amr Saad as the leader.

A week after Eid’s arrest, he accompanied police forces to a desert training site in the Upper Egypt governorate of Qena. However, clashes erupted and Eid and the officer accompanying him were specifically targeted and killed by militants in the exchange of fire. Police forces reportedly killed two militants.

On August 20, during another raid targeting the Amr Saad group in Bahariya, where Friday’s attack took place, militants caught security forces off guard and engaged them in an exchange of fire, killing 14 members of the security forces, five of whom were commissioned officers. The raid took place after the Interior Ministry received intel that members of the group were in the area.

And until speculations emerged following yesterday’s attack, Amr Saad and the group he is believed to oversee have not been in the news since.

The Friday operation took place 100 km away from Hassm’s recognized territory — the group notoriously operates within Giza and Fayoum.

Hassm first emerged in July 2016, claiming responsibility for several operations, most prominently the killing of six police officers at a Giza checkpoint in December 2016, and the assassination of a National Security Officer Ibrahim Azazy last July.

Despite the relative geographical proximity of the attack to Hassm’s territory, the nature and scale of the clashes, as well as the large number of victims make it improbable to attribute responsibility to the group. Additionally, several Hassm leaders have been killed in a series of security operations against the group in recent months, a development which has resulted in diminished activity from the group.

All things considered, Friday’s attack came as a surprise. If Ashmawy is revealed to be behind the attack, it would mark his return after a long absence and disprove speculations regarding his relocation to Libya. If the group under Amr Saad’s leadership claims responsibility, it would constitute its revival after an assumed defeat by security forces. If Hassm is the perpetrator, it would prove that they were able to remain functional despite efforts by security forces targeting the group.

AD
You Might Have Missed
Carbon Colonies & A Green New Deal
Where do old lesbians go to die?
What we talk about when we talk about trees
Mugamma revisited: Reimagining the building and the square
AD
Omar Said
82 articles on Mada

Topics
Related
a
Update: Over 50 police officers killed in clashes with militants in Bahariya Oasis
14 confirmed and 20 reported policemen killed in clashes between Armed Forces and militants in Giza
Hassm
Hassm claims responsibility of alleged Myanmar Embassy bombing in Cairo, Embassy denies
Hassm claimed responsibility for an alleged Saturday attack on the Myanmar Embassy in Cairo
Hesham Barakat assassination
An organization without a name: How a group of beginners killed Egypt’s prosecutor general
Mohamed Hamama | A story of a nameless organization and Egypt's most ambitious assassination operation in a quarter century
Al-Mourabitoun
War on terrorism in Western Desert, but what about Sinai?
The military spokesperson declared the elimination of an alleged terrorist cell in the Western Desert