I have been reading the philosophers Slavoj Žižek, Jeremy Glick, and Rebecca Comay lately in a desperate attempt to understand the strange and alarming historical developments of our shared moment. All three explore revolution, and while each approaches the topic with different priorities, values, and goals, they share a preoccupation with the modern subject as an empty hollow waiting to be filled and transformed by all varieties of commitments, identities, passions, and hatreds.

Žižek’s formulation, in which he explains subjectivity as a barred void, is perhaps best known. From his perspective, the barren ground of the subject can be occupied by a profusion or plague of identity markers, though none lay permanent claim to its protean subjective territory. This slipperiness, its most salient quality, is the horizon of political meaning, allowing us to be changed by circumstance and to take up revolutionary causes as our own. It is also, for Žižek and compatriots, the ambiguous mark of universality, for only the malleable nature of our absent centers provides us with common cause. It’s no surprise that this conception of the subject as a voided wound emerges most forcefully in critical theory at a time when history itself is undergoing a carefully engineered emptying of meaning.

I couldn’t help but think of our shared absent center while viewing Michael Rakowitz’s exhibition, Backstroke of the West, at Chicago’s Museum of Contemporary Art last month: It reads as a flea market of the ideological detritus that maps our historical moment through discarded cultural memes and literal trash. Rakowitz, an Iraqi-American artist whose practice matured during the disastrous US-led invasion of Iraq that began in 2003, focuses on that conflict, its antecedents and its aftershocks with single-minded care — though the war itself only comes into view through second-hand, seemingly unrelated cultural and material cast-offs. In the politico-cultural cosmos strung together in his ad hoc installation stories, there is no central crux, no agreed-upon narrative that can function as grist for the mill of public contemplation and working-through. There is only allusion and tangentially related cultural currents that echo or augur events that are now no longer available for direct engagement. In Rakowitz’s telling, it is not just the modern subject but history itself that emerges from a void as a sort of collective self-understanding that can only be viewed askance. 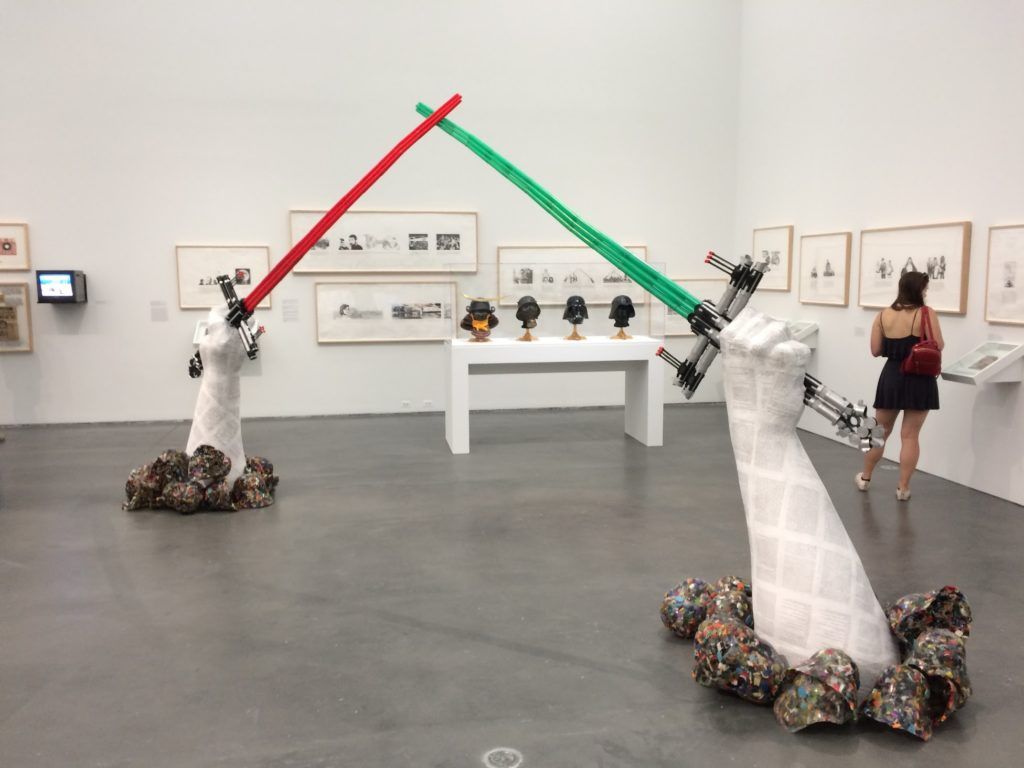 His 2009 installation The worst condition is to pass under a sword which is not one’s own is exemplary. It charts Iraq’s militarization under Saddam Hussein through the visual culture of pulp science fiction novels and movies, emphasizing the impact of the original Star Wars trilogy on uniform design and military monuments in Iraq. According to the installation, Star Wars was first shown in Iraq in 1980, and Saddam saw the film with his 15-year-old son Uday; as a grown man, when he created the Fedayeen Saddam, a paramilitary cadre that violently enforced the Hussein regime’s will, Uday based their helmets on Darth Vader’s. This story, which involves the onset of the Iran-Iraq War (also in 1980), the 1995 founding of the Fedayeen, and that group’s later resistance during the 2003 invasion, is told through an amalgamation of film advertisements, fantasy novels, military helmets (including Vader’s original head-piece), and printed images with handwritten notes recounting the intersection of Star Wars and the Iraqi military. The centerpiece is a reimagining of the Victory Arch, a monument designed by Saddam to commemorate the Iran-Iraq War in Baghdad: Rakowitz copies the crossed bronze sabers of Saddam’s massive triumphal arch with plastic lightsabers and GI Joe figurines entombed in clear resin. On the wall behind, an old Star Wars poster features Darth Vader brandishing two lightsabers, the image that inspired Saddam while he was imagining the Victory Arch.

The text elements of Worst condition also include historical oddities with no direct connection to the Husseins, modern Iraq, or the Fedayeen. Notes recount the flights of hot air balloons in post-revolution France and Canadian aerodynamicist Gerard Bull’s childhood obsession with H. G. Wells. This approach to history, in which disparate events spin off Rakowitz’s installations like sparks from a Catherine wheel, has appeared throughout his career. In Dull Roar, a 2005 installation reconstructed at the MCA, a rubber inflatable building is repeatedly filled by an air compressor and then allowed to deflate, echoing the demolition of the failed Pruitt-Igoe housing projects in St. Louis, Missouri. The text attached to the work recounts that 1954 event alongside tales of the rubble, which was reused as building material for expensive suburbs nearby. Other notes relate to New York City: describing the destruction of the original Penn Station in 1963 to clear the site for Madison Square Garden sports stadium, modernist architect Louis I. Kahn’s death in a Penn Station men’s room in 1974, and Minoru Yamasaki’s architectural design process for the World Trade Center in the 1960s. The Pruitt-Igoe buildings were also conceived by Yamasaki, and this concluding reference to his crowning masterpiece connects Dull Roar to its absent center: the annihilation of the Twin Towers during the 9/11 attacks. 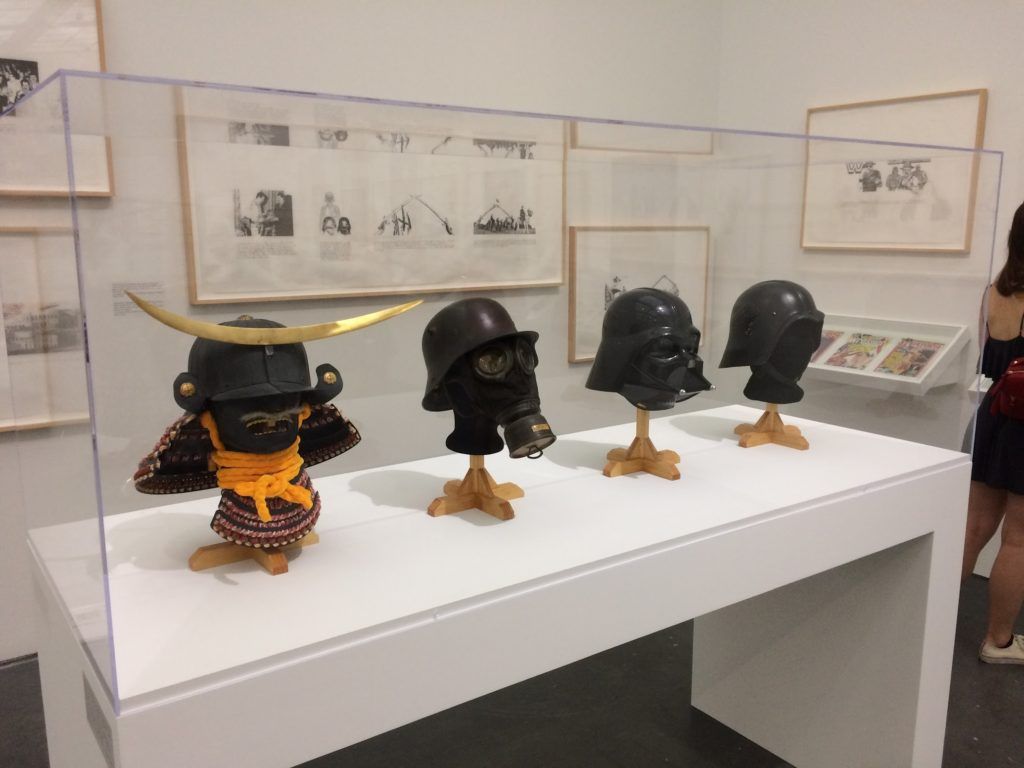 In another play of margins to central voids, Dull Roar acts as the gravitational nexus around which the rest of the show orbits like bits of historical detritus. Its lazily pulsing form lays at the center of the space, alternating between semi-swollen and fully deflated evacuation. Rakowitz’s most visually bombastic works are his reproductions of ancient Mesopotamian artifacts built up from layers of multicolored cardboard and newspaper clippings. Mimicking the display traditions of a natural history museum, he sets his garbage doppelgangers in clusters and cues on long tables, each meticulously labeled to indicate its culture of origin, provenance, and fake accession number. Temple sculptures from the city of Eshnunna vie for attention with portraits of Sargon II and the narrative stone reliefs of the Warka vase, copies of original artifacts long ago taken from Iraq to Western museums. Collectively titled The invisible enemy should not exist, these sculptures are beguilingly fun to view even as they evoke the skullduggery that went along with the development of Western archaeology and anthropology. The apogee of this aspect of Rakowitz’s practice is May the Arrogant Not Prevail, first produced in 2010, which reproduces the famed Gate of Ishtar as a Potemkin village of cheap Arabic food packaging and print advertising. May the Arrogant is the entrance to the Chicago show, its paltry plywood innards facing viewers as they approach. Its inward-facing façade painstakingly copies the bold blues and golds of the original, another Mesopotamian wonder that now resides in a Berlin museum.

These themes culminate in the achingly beautiful 2017 video The Ballad of Special Ops Cody, a work commissioned by the MCA and based on a historical detail of the most recent US occupation of Iraq. In 2005, an Iraqi insurgent faction known as Mujahideen Squadrons posted an image online of a US soldier held at gunpoint. Upon analysis, it became clear that the soldier was actually a children’s action figure skillfully photographed to appear as a full-scale and very living person. For his video, Rakowitz has cast the figure, called Special Ops Cody by its producers, as the hero of an unlikely stop-motion prison break drama. Cody recollects his traumatic experiences in Iraq as he wanders the Oriental Institute of the University Chicago, where ancient Mesopotamian artifacts watch him silently. He passes gargantuan lamassu and reliefs of long-dead rulers, eventually attempting to liberate a glass vitrine full of small votive statues. They will not answer his pleas to escape, however, and he eventually takes his place alongside them, frozen and voluntarily imprisoned behind a transparent barrier. Cody’s narration compares the sculptures to the many dead Iraqis he saw during the war:

But they look like you, laying there with toe-tags. The blood has ceased running through their veins. They had formed clots on the cots. The net webbing was full, so it dripped. It dripped onto the floor. It pooled, and it dripped. I’m sorry. Why do you look at me like that, like we’re different. Look, I said I was sorry. We’re not different. I mean, we are, but we’re also the same. Because both of us, all of us, we were created. We were sold and stolen, or stolen and sold. To a destination unknown that’s not our home. We shouldn’t be here. We have stories to tell, to our families, our friends, in our own native tongue. We have stories to tell! What’s your story? I just keep talking, I just keep talking. I guess to myself. Because you’re not answering. You guys, why are you here? Don’t you all wanna go home? Be free? I can get you all out of here. Now’s your chance. When I see you, your faces… I see your faces without eyes, and I think of that day. They were broken, but we destroyed them. You were broken, so we keep you locked up. Fragile. Temperature controlled. Humidity-controlled. Without the chance of human hands touching you, except for a quarterly dusting, but always gloved. I will always be gloved too. And never again shall blood course through my veins.

Perhaps the message of Rakowitz’s whole practice lies in The Ballad of Special Ops Cody. When there is no center, when history is evacuated of its basic meaning and legibility is compromised and threatened, there remains only play. A field of play in which strange marginal curiosities can help us detect a larger truth like the bending light around a black hole. Special Ops Cody, a toy created as propaganda, used as fake ransom bait, and eventually the star of his own movie, is still that: a toy, an empty mold of plastic that receives our projections. But toys allow play, and play can offer its own sort of utopia when other avenues are foreclosed.

Backstroke of the West shows at the Museum of Contemporary Art, Chicago until March 4, 2018

AD
You Might Have Missed
Mugamma revisited: Reimagining the building and the square
Carbon Colonies & A Green New Deal
What we talk about when we talk about trees
Where do old lesbians go to die?
AD
Dan Jakubowski
9 articles on Mada

Topics
Related
cinema
Experimental Summer: Independent film as lamentation of elitist failure
Andeel | The state is at war with independent cinema because it can inspire other forms of independence
visual art
Moments of turmoil are daily latencies made visible: A conversation with Hassan Khan
Dan Jakubowski | The Egyptian artist's Composition in a Public Park won the Sliver Lion at this year's Venice Biennale
visual art
Artifacts from humanity’s failed futures: A conversation with artist Basim Magdy
Dan Jakubowski | Groups of people have very short-term memories, says Basim Madgy
7th CVF FestBeat
FestBeat: Talking about institutions and fluidity at Cairo Video Festival
Nour El Safoury | The openness and flexibility of the festival is appealing, just like other spaces free from ministry