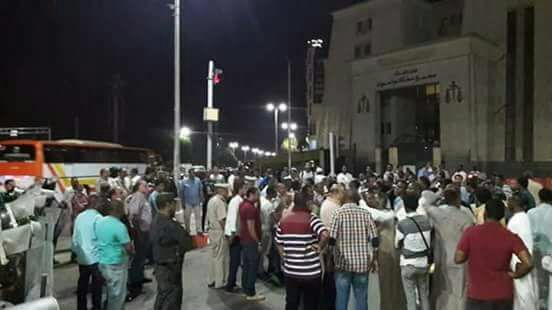 The detention of 25 Nubian activists was extended for 15 days by a court in Aswan on Tuesday, after they were arrested early September for their involvement in a march dubbed “The Day of Nubian Assembly.”

The Nubian activists gathered at the singing march to call for the implementation of Article 236 of the constitution, which grants Nubians to return to their ancestral land. At the time, 24 protestors, including human rights lawyer Mohamed Azmy, were arrested. An additional activist was arrested later as he attempted to visit those in detention.

As the detainees families gathered in front of the courthouse to oppose the ruling to renew the detention period, security forces fired teargas into the crowd in an attempt to disperse them, and arrested several people, lawyer Ahmed Rizk told Mada Masr on Tuesday.

The activists arrested on Tuesday were held in the Central Security Forces complex in the Shalal area and were interrogated with no lawyers present and without being informed of their charges, Rizk told Mada Masr on Wednesday. It remains unclear when the prosecution will announce its decision based on the interrogation, added Rizk.

In objection to the extended detention periods as well as the Tuesday arrests, five female Nubian activists declared a partial hunger strike on Tuesday. This decision follows security forces’ crackdown on Nubians seeking their rights, Seham Osman, one of the striking activists and sister to a detainee, told Mada Masr.

“We cannot call what took place last night a ‘clash’ because the judge’s unusually late decision prevented us from submitting our appeal on time. The decision to extend the detention periods came as a shock to the detainees’ families, prompting several mothers to wail,” said Osman.

“We were taken by surprise later when police vehicles started firing tear gas into the crowd without so much as a warning, forcing many of us to seek shelter in neighboring buildings. Others who stayed behind to assist the elderly and those already affected by the tear gas were caught and arrested.”

According to Osman, the female Nubian activists plan to report their hunger strike to the prosecutor.

While the Aswan court had announced their intention to release the detainees on bail, a prosecution filed an appeal against the decision and was later accepted, leading to the extension of their detention periods.

Topics
Related
Nubian protests
Police clash with families of detained Nubian activists, several arrests made
A number of Nubian citizens were arrested as police forces clashed with families of detained Nubian activists
Nubian rights
Singing march in Aswan lands 24 Nubian protesters in detention
24 Nubians were ordered to remain in detention for four days on Monday, after they were arrested during
Nubian rights
Nubian language, generational schism and state refusal
Leena ElDeeb | As the state fears that Nubian is a threat, it is up to civil society to maintain the language
Nubian rights
Activists call Sisi’s announcements on Nubia insufficient
Mai Shams El-Din | Although Sisi announced the reversal of a decision to annex the Nubian Forkund village, activists argue