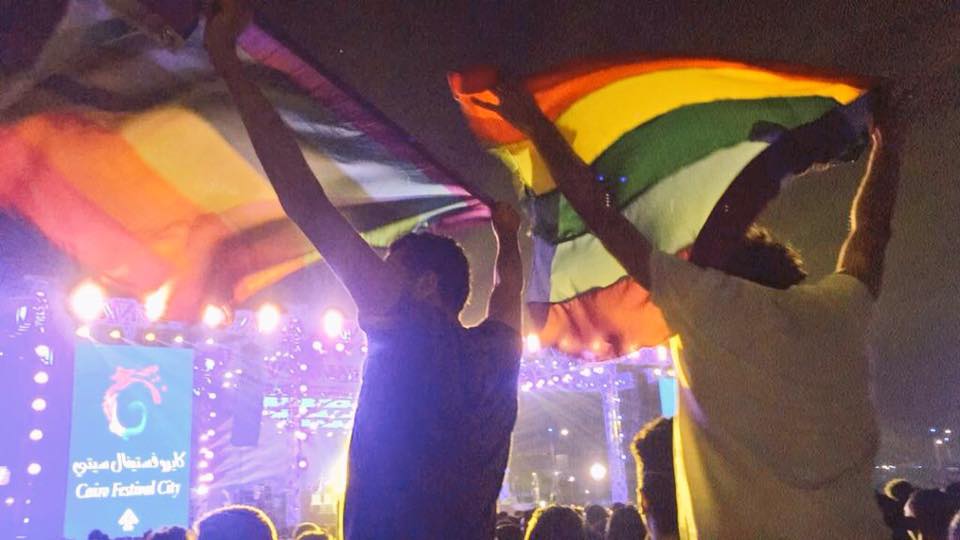 Police apprehended four men on Friday night from an apartment in the Giza neighborhood of Hadayek al-Haram, according to gender and women’s rights officer at the Egyptian Initiative for Personal Rights, Dalia Abdel Hameed, in the latest spate of arrests in the recent security crackdown on LGBTQ individuals in Egypt.

There are conflicting reports in local media as to the exact number of people arrested as part of the crackdown, but Mada Masr has been able to confirm that at least 15 individuals have been detained and face charges ranging from “debauchery” to “promoting sexual deviancy” since a group of people raised a rainbow flag — a symbol of LGBTQ rights — at a concert in Cairo on September 22, which led to seven arrests on Monday in connection to the incident.

This brings the total number of arrests to 22 individuals since the concert, in which Lebanese band Mashrou’ Leila, whose lead vocalist is openly gay, performed at Cairo Festival City mall in the east of Cairo.

“There are fears that those we have accounted for are less than the actual number of people facing arrest,” Abdel Hameed told Mada Masr.

On September 23, one day after the show, a 19-year-old student was arrested on charges of “debauchery” in connection to the concert. Three days later, he was convicted and sentenced to six years in prison, six years probation and a LE300 fine.

Six men were also arrested on September 27 from several gay-friendly cafes in Ramses, near downtown Cairo, Abdel Hameed confirmed. They are being held at Azbakeya Police Station and face a range of charges, according to a human rights lawyer who spoke to Mada Masr on condition of anonymity.

Abdel Hameed told Mada Masr that two other individuals were also arrested on debauchery charges earlier this week and are being detained at Agouza Police Station in Giza. They will face trial on October 11, according to the Amnesty report, which states that another two men were arrested on September 28 and are being held at Dokki Police Station.

Earlier this week, Lawyer Amr Abdel Salam, vice president of the Egypt-based Al-Haq International Human Rights Organization, lodged a complaint with the Public Prosecution against the organizers of the concert, the director of Cairo Festival City Mall, Mashrou’ Leila band members and the administrators of the Rainbow Egypt Facebook page, accusing them of “spreading debauchery.”

The Musicians Syndicate also banned the Lebanese indie band from performances in Egypt, announcing on Sunday that the group would only be granted a permit to perform in the future if they first acquire security approval. Syndicate deputy Reda Ragab told Mada Masr that the decision is due to be reviewed during the syndicate board’s general meeting.

The current arrest campaign appears to be the most violent crackdown in recent years in the Egyptian state’s longstanding persecution of the LGBTQ community. While homosexuality is not specifically outlawed in Egypt, anti-prostitution and debauchery laws are frequently used to target LGBTQ individuals.

Grindr, a dating app commonly used by gay men, released a warning in 2014 saying that Egyptian police may be using the application to entrap individuals and warned users to take steps to protect their identities.

Activist campaign Solidarity with Egypt LGBT estimates that between 2013 and 2015, 53 percent of charges leveled against LGBTQ individuals in Egypt featured the use of websites and social media to entrap people.

Topics
Related
LGBTQ
Rainbow flag at gig sparks media storm of hostility
Mostafa Mohie | Rainbow flag at Mashrou' Leila's Cairo gig reveals deep-seated vitriol in Egyptian media
Musicians Syndicate
Update: 7 arrested for ‘promoting sexual deviancy’ after raising rainbow flag at Mashrou’ Leila gig
Syndicate rep says the Lebanese band will be banned from performing in Egypt
LGBTQ rights
Shades of in/visibility: On coming out in Egypt
Lara El Gibaly | It’s not about individuals coming out to, but rather about the issue itself ‘coming out’ for discussion
debauchery charges
11 sentenced to 3-12 years in prison for homosexuality
Pesha Magid | The Agouza Criminal Court has sentenced 11 people to prison terms ranging between three and 12 years