A letter about a nostalgic art tour: A screening and three exhibitions in Cairo

Hello. How are you doing? You were probably expecting this to be written in a different format, but we’re living in a completely different time now.

The other day I went with some friends to look at art in downtown Cairo. It was a funny evening with three art events at the same time. We got excited, we were in adventure mode, knowing it would be a marathon — that in between shows, around the corners of Champollion and Talaat Harb Street, we’d run into friends on their way to the show we’d just came from. It made me feel like we were on the pilgrimage, perhaps because the actual hajj pilgrimage was happening at the same time. Something about that feeling reminded me of 2012, which may have impacted the way I experienced the art.

The first event we went to was a screening called “In a Nutshell 3” at Medrar. It was a part of the Cairo Video Festival, which Mena El-Shazly is curating. The festival is now stretched, so that things happen after the official ending in February. It took me a while to understand that, and I kept asking if the three screenings I went to this month were all the same thing, but I finally understood that they were collectively called “In a Nutshell” and screened films from the festival archive. You know how I am with administrative contexts — I didn’t really want to go through all of these details but I’m doing this for you.

Anyway, what really got my attention was that the videos varied hugely in style and taste, which created a vibe I found interesting. The range of the selection was perhaps a little too wide and some films were shockingly bad, like Marie Fages’ 14-minute White Tides, in which a clichéd symbolic revolutionary struggle is being performed in a clichéd contemporary language, with young handsome skinny people spraying stencils of their hands on the walls of a shiny white corporate building presided over by an evil-looking old white man, and they get chased by security guards who spray them with chemicals.

But on the other hand there was a very nice, weird Chinese animation, Sha Liu’s 5-minute-long It Is My Fault, which depicted the painful life of a millennial graphic designer. It was very colorful and computer-centric, idea-wise and execution-wise, and had an intense dancey soundtrack. I found its aesthetics generally fresh and modern on a slightly deeper level than the usual mainstream hip post-internet culture you don’t like that much, even though you are very connected to it, one way or another.

Watching these two very different films made me think of what Medrar is doing in general. I think there is something I like about Medrar’s relaxed approach to the outside world. 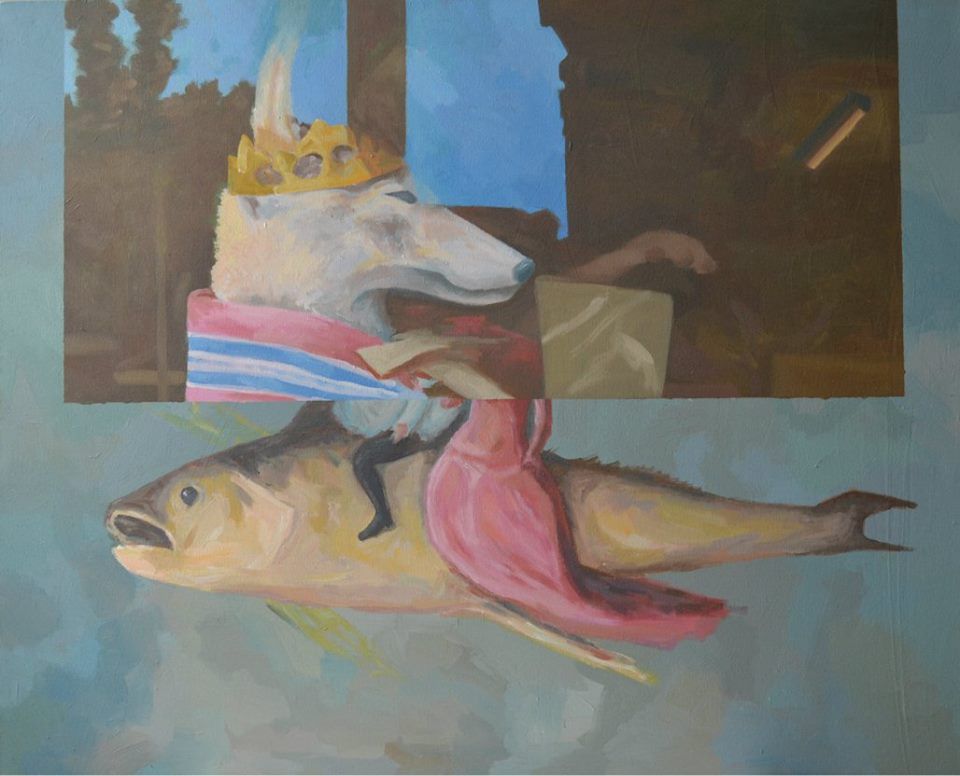 The next event was the opening of “White Smoke,” a painting exhibition by Ahmed Sabry at Mashrabia Gallery. The Facebook event showed an interesting painted collage of multiple elements mixed in a sentimentally incoherent way, also in a clearly “millennial” language. The show itself confirmed this feeling: inspirations from internet culture and Facebook aesthetics were turned into crafty or at least craft-oriented acrylic paintings, that include sudden appearances by weird objects, like fluffy semi-organic creatures that appear to be a cross between a bird and a gigantic plant, or a huge geometric pink pig-like structure that reminded me of a Trojan horse.

I felt it was a confused fight for attention between two players: the very loud political commentary, and the object. Objects of no political or discourse significance, objects that looked interesting mostly for the way they look, trying to find a place for themselves in a heavily contextualized environment. This fight made me think of the eternal discussion about the political and artistic in Cairo’s art scene, especially in the last few years. And it gives the exhibition, in my opinion, a hesitant voice that struggles to find a way for itself through a slowly settling thick cloud of white smoke. Neatly symbolic. 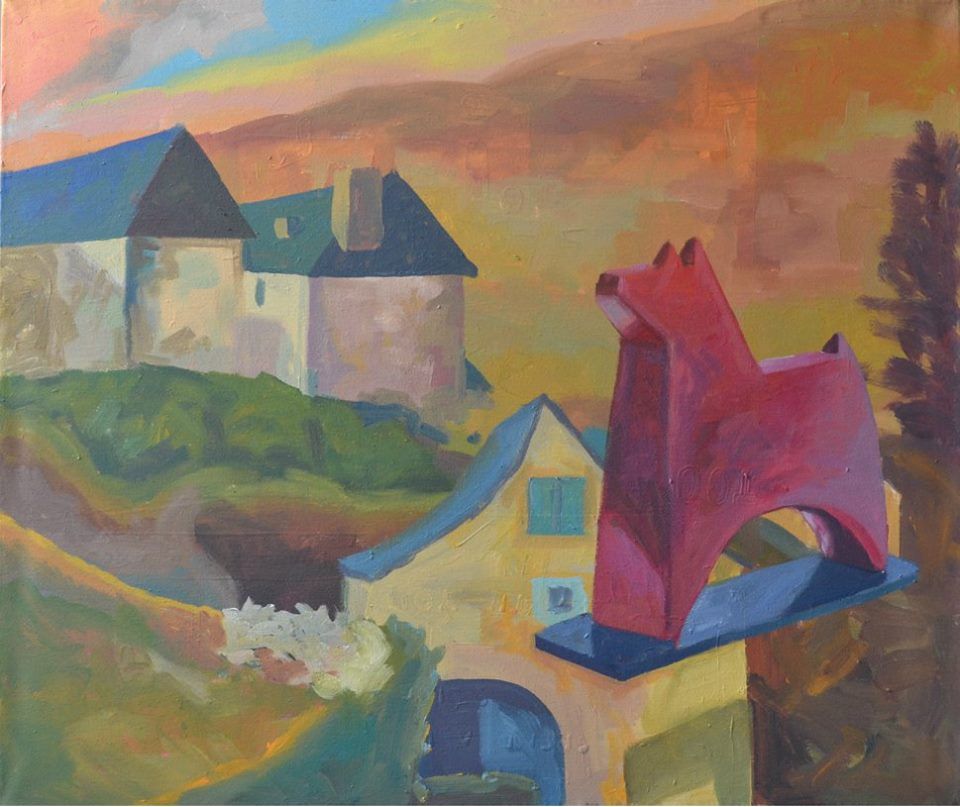 I was slightly disappointed by the show’s unfulfilled potential, but I feel we’d have been meaner critics of it a few years ago. I would have been dismissive, and I’d have loved to be the one to say with a condescending smirk: “This is nothing but a pale echo of Bassem Yousri’s show RGB!” But for some reason I have no interest in talking like that now, at least on that day. Am I getting old and my standards tamed by generational and personal failures? Am I learning to accept? Or was it just a nice evening? I’m glad that this was how I reacted, because I was able to notice the funny objects wanting to be interesting for non-political reasons. Anger is a cool black cat blinded by the need for a very necessary entertaining self-assuring simulated experience, as they once said.

The third event was the opening of Ash Moniz’s “In The Anticipation of a Future Need to Know” at Townhouse. I don’t know why arriving in Townhouse’s factory space gave me a sharper, more melancholic shot of nostalgia. Maybe because I haven’t been to any shows there for a while? Maybe because there were more familiar faces at the opening? Maybe it’s the partially demolished building next door that the government wanted to destroy last year, and the present reminder of that moment?

Moniz’s show, a video installation with a sound work and three video works, felt like it had a lot going on. One part that got my attention, titled Heist Plotters, had a large grid of multiple screens showing footage filmed by awkwardly positioned cameras capturing a roughly performed, unedited scene in which a group of people are plotting something. It’s an exhibition that incites very strong feelings towards surveillance. All the works are largely conversational: the use of video and sound as medium seemed to want to take the state of conversing to an area where the form gives it more depth or richness, an ambition that wasn’t — in my opinion — taken very far.

Aesthetically, the large video installation was the most interesting to me because it made me think of the camera, filming, editing and performance, and actors’ relationships with the work and agency. But unfortunately the political weight of the moment, which the film is experimenting with, is still the heaviest of all its components. This wouldn’t have disappointed me had the rest of the exhibition had more engaging tricks going on. But the fact that the other works were politically heavier and aesthetically blunter made me feel that the show’s highlight was a political statement rather than a sensual experience or even a crafty amazing trick, especially as the exhibition wasn’t very sharp when it came to image or sound quality.

I was excited about this exhibition’s curiosity towards “recording” as a significant human act that lies at the heart of artistic communication, but I was disappointed that it failed to free itself from the political associations of recording. In a moment when political conflict casts a heavy shadow over everything in Egypt, an exhibition that is so dictated by the rhetoric of this shadow is for me an exhibition from the past. Not being dictated by this rhetoric doesn’t necessarily mean ignoring it, but nothing is more boring in art than stating the obvious. And bad hinting can also be painfully cheesy.

There was another trip last week that didn’t happen on that same weird evening. I ran to see Nadia Mounier’s exhibition “I Will Defend Myself” at the Contemporary Image Collective before an important meeting, so I was initially distracted. By my luck I was the first person to see the show, just a few seconds after it opened. The space was empty and I quietly took my time watching the photographs and videos, and I was blown away. 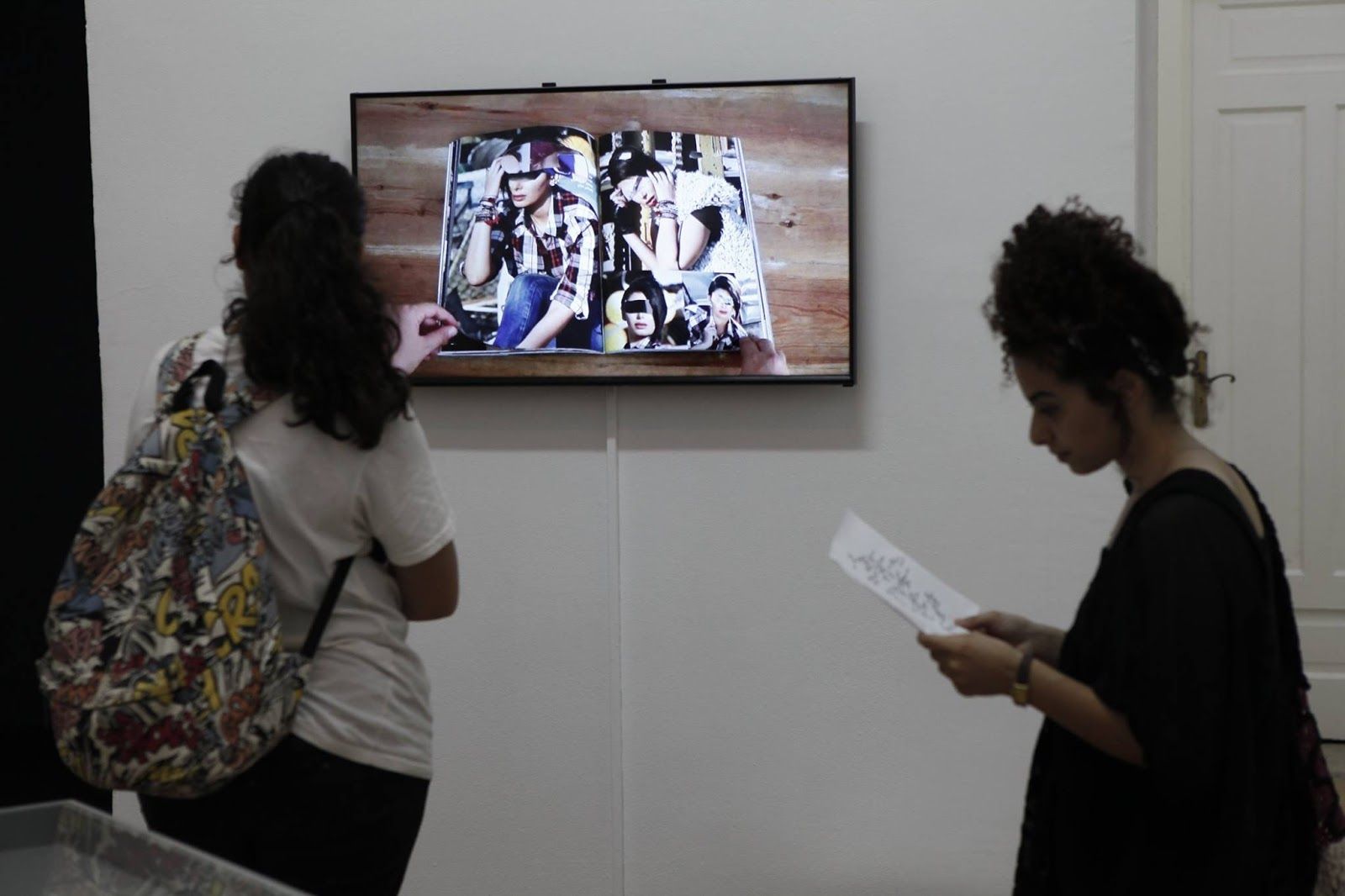 Almost all the subjects in the images were women whose pictures were manipulated, either virtually, using Photoshop, or physically, where actual prints of photographs were smoothly severed with razors and cutters. The show was also my first opportunity to see Mounier’s video work. One is a captivating screen recording of a group of men being photoshopped out of a beach photo of a family in swimsuits, and the other shows a hand flipping through pages of a fashion magazine in which women’s faces have been cut out. The holes in the pages and the relationships between them create a dazzling effect as the cuts overlap, and the hand motion reinforce a numbing steady sense of control. 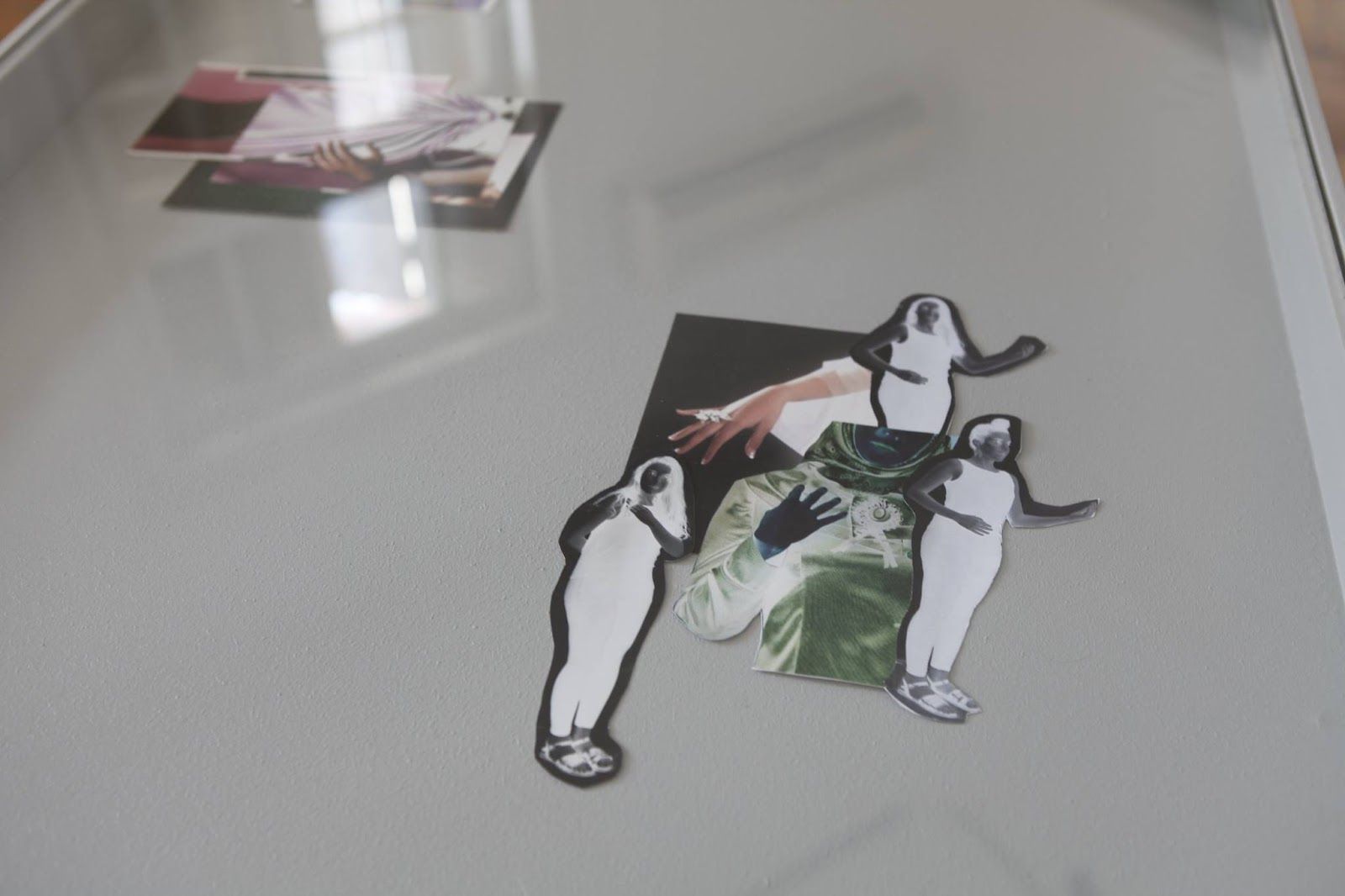 So gender, isolation and covering are certainly present in the exhibition’s central area of interest, yet because of a certain air of cynicism and weirdness, “I Will Defend Myself” doesn’t feel like it owes all of its importance to that. It contains many connections between ideas about beauty, value, protection, harm, abuse, pain and love, connections that are demonstrated through a wide range of colors, shapes and combinations. The connections also don’t shy away from putting the maker and her relationship with these ideas in the center, in a very straightforward and honest way. It is entertaining and beautiful, and even though a major, familiar political issue is at its heart, the approach is new and finds angles that make thinking about it a refreshing idea. It isn’t sweetness as much as a curious look, far away from the story of trauma that is usually exploited.

This is the end of my story about the art tour. See you.

AD
You Might Have Missed
Mugamma revisited: Reimagining the building and the square
What we talk about when we talk about trees
Where do old lesbians go to die?
Carbon Colonies & A Green New Deal
AD
Andeel  @_andeel_
280 articles on Mada

Topics
Related
visual art
On part of PhotoCairo6: What does ‘art is for all’ mean?
Mohamed Abdel Raouf | On slowly realizing the circle of courage to create and consume art is wide enough for everyone
visual art
MASS Alexandria 2016: A busy and approachable final exhibition
Lara El Gibaly | Three days of contemplation and conversation, between the deeply personal and the public.
art in public space
City Shadows and a DIY toolkit for art in abandoned spaces
Rowan El Shimi | Mahatat's City Shadows exhibition in Port Said was a good start to a pioneering project centered around
Ahmed Sabry
Ahmed Sabry: Relieving the weight
Shehab Awad | Ahmed Sabry paints landscape murals in the apartments of Cairo’s newly constructed upscale neighborhood,