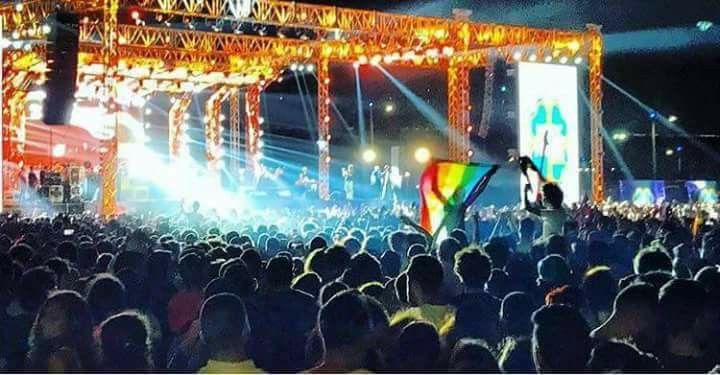 The rainbow pride flag was raised at a Mashrou’ Leila gig last weekend, seven people were later arrested, and Egyptian media went into a spin.

Most media coverage was hostile toward those who raised the flag, which is commonly used as a symbol of LGBTQ rights and solidarity, but more notably, writers and publications seemed confused as to what language to use to describe the Lebanese band — which has become known for their outspoken lyrics that challenge the political and social status quo — as well as those holding the flag and the event organizers. The word shawaz, meaning deviant, was perhaps the most widely used.

Al-Bawaba and the privately owned Al-Masry Al-Youm newspaper both used the term “sexual deviants” in quotation marks in articles they published, and writer Fathy Mahmoud published an opinion piece in the state-owned Al-Ahram newspaper under the title,  “The flag of sexual deviants and the eroding of the youth.” Another opinion piece in the privately owned Youm7 newspaper saw editor Dandarawy al-Hawary run with the headline, “The deviants of Mashrou’ Leila belong to the April 6 movement, participated in January 25 and support a homosexual organization in Egypt!”

“Tell me, how do we define this crime according to the law? and what is the ‘correct’ way to name those who raised the flag,” contentious TV host Ahmed Moussa asked lawyer Samir Sabry on his show “‘Ala Mas’ouleyety” (My Responsibility), aired on the privately owned Sada al-Balad channel.

“The crime is inciting debauchery, and an open call in a televised concert for youth to join the circles of the ideals,” Sabry said, mistakenly using the word mithaly (ideals), a mispronunciation of mithly which is a common word for ‘homosexual’ in Arabic.

Moussa corrected Sabry, but added that a better word would be “deviants.” Or “people of the left,” Sabry suggested, referring to an offensive term used in Egyptian slang to refer to those who are seen to deviate from the accepted norm.

Moussa seemed pleased with the proposal: “Yes, people of the left. This is good.”

The same term was used by member of the Supreme Council of Islamic Affairs and Islamic preacher Khaled al-Guindy in his show on the private DMC channel. He also made reference to the Prophet Lut, whose story in the Quran is often cited as religious grounds for condemning homosexuality.

“Those are the people of the left, who raised the flag of the deviants,” he said. “We pamper them and say they are homosexuals … No. They are a group of people who have destroyed everything,” he added.

Media analyst Yasser Abdel Aziz says Egyptian media often reflects a normative, conservative environment. Most publications globally have developed a set of ethics for publishing concerning LGBTQ matters, he adds, explaining that this is reflected in penalties for discriminatory writing in many Western countries. But this also points to a wider conversation on a queer lexicon that has perhaps only taken place in small circles.

In his article in Youm7, Hawary connected the rainbow flag, human rights organizations, the April 6 Youth Movement and a number of political and rights activists that he mentioned by name. He said he had warned of a conspiracy by these groups last year.

“A number of local and international organizations played a big role before January 25 and afterward in influencing youth, many of whom have trained with them, against all ethical and nationalistic values … The plans of these foreign rights organizations took a new turn in focusing on defending the rights of deviants, women’s rights and the rights of the disabled,” Hawary said.

Head of the National Press Authority, Karam Gabr, published an article in the same newspaper under the headline, “The deviants and ISIS,” writing: “The West, which founded ISIS, is the same entity that exported the idea of sexual deviancy to us, despite the fact that our societies are completely different from theirs. We do not accept what they accept, and this is unrelated to human rights and all of these fake slogans.”

Moussa made a similar connection. “Terrorism won’t affect Egypt, the countries that besieged Egypt won’t affect us. What will affect the country and may destroy it, God forbid, is if this issue [homosexuality] becomes permissible,” he said. “All of this destruction came to the surface, this dirty sewage, after 2011. Did you see how they brought destruction? Before, they were arrested and named as satan worshippers.”

The paternalistic role of the state

A number of media professionals questioned why the state hadn’t been more present in preventing such an “incident” from occurring, referring to the raising of the flag at the gig. TV host Lamis al-Hadidy asked the Musicians Syndicate Deputy Reza Ragab about the syndicate’s responsibility for such matters, during her show “Hona al-Asema” (Here’s the Capital).

Ragab said event organizers had obtained permission from the syndicate to hold the concert, as usual, as Mashrou’ Leila is a foreign band. He blamed security forces and the Artistic Works Authority for allowing the Lebanese band, whose frontman is openly gay, to perform in Egypt.

Reda said the syndicate has moved to ban Mashrou’ Leila from performing in Egypt, announcing on Sunday that the group would only be granted a permit to perform in the future if they first acquire security approval. This decision is due to be reviewed during the syndicate board’s general meeting next week, he added.

TV host Iman al-Hossary, on his show DMC night, asked whether the “extreme shock” being expressed by many people is due to the public raising of the flag or the existence of “those people.” Security expert and member of the Supreme Council to Fight Terrorism, Khalid Okasha, said the shock was due to the promotion of such deviant ideas, adding that the state would monitor online pages that celebrated the raising of the flag in order to arrest their admins.

In his daily column for Al-Ahram, poet Farouk Goweida said the incident reflects “a bad image of our youth that we are showing to the world,” adding, “This was a grave mistake by state authorities, unless there are those among them who support and encourage this serious defect that has affected the Egyptian family. The authorities are obliged to openly explain to the people what happened at the deviants’ concert.”

AD
You Might Have Missed
Carbon Colonies & A Green New Deal
Mugamma revisited: Reimagining the building and the square
What we talk about when we talk about trees
Where do old lesbians go to die?
AD
Mostafa Mohie
64 articles on Mada

Topics
Related
Musicians Syndicate
Update: 7 arrested for ‘promoting sexual deviancy’ after raising rainbow flag at Mashrou’ Leila gig
Syndicate rep says the Lebanese band will be banned from performing in Egypt
LGBTQ rights
Shades of in/visibility: On coming out in Egypt
Lara El Gibaly | It’s not about individuals coming out to, but rather about the issue itself ‘coming out’ for discussion
LGBTQ rights
On the possibility of being a queer Arab
Zizi | Every individual who becomes aware of the formidable struggles we face every day has an inescapable responsibility.
debauchery charges
11 sentenced to 3-12 years in prison for homosexuality
Pesha Magid | The Agouza Criminal Court has sentenced 11 people to prison terms ranging between three and 12 years