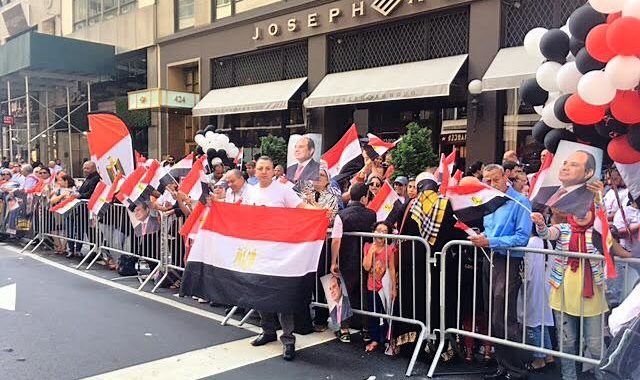 By
Asmahan Soliman and Passant Rabie

A crowd of Egyptian-Americans are gathered on a busy street in midtown Manhattan. They are dressed in the colors of the Egyptian flag. Some are wearing shirts with prints of President Abdel Fattah al-Sisi’s face. The Egyptian nationalistic song Teslam al-Ayadi drowns out the usually ever-present sound of New York traffic.

“I don’t want to leave. We haven’t seen Sisi yet. How can we leave?” yells an older woman in the crowd who is carrying an Egyptian flag.

The group was bused in from various areas of New York and New Jersey as early as 6 am. They wait on the corner of 49th Street and Madison Avenue, where President Sisi is reportedly staying.

Arriving in New York on September 17 to take part in the 72nd session of the United Nations General Assembly (UNGA), this is the fourth General Assembly Sisi has attended since being vaulted to head of state in the aftermath of events of 2013.

Sisi already met with Palestinian President Mahmoud Abbas, as well as Israeli Prime Minister Benjamin Netanyahu, who he spoke with separately on Monday night in their first public meeting on the sidelines of the General Assembly. His meeting with Netanyahu included representatives of US-based Jewish organizations, according to Alaa Youssef, the presidential spokesperson.

Egypt’s economy was the focus of a meeting on Monday between Sisi and a group of American businessmen, who are potentially interested in investing in Egypt, according to the office of the Egyptian Permanent Mission to the UN.

Sisi is scheduled to address the General Assembly on Tuesday during the opening session in the evening. On Wednesday, he is set to attend a UN Security Council (UNSC) meeting on the reform of UN peacekeeping operations, along with the 14 other members of the council.

The president is also expected to meet with US President Donald Trump on Wednesday, which will be the third time the pair have met since Trump assumed office in January.

According to an Egyptian Foreign Ministry source, speaking on condition of anonymity, North Korea is the main issue on the table for the meeting between Trump and Sisi. He has tasked his military and diplomatic aides with addressing US concerns vis-a-vis military collaboration between Egypt and North Korea, the source added.

Washington DC recently inquired about a ship that it claimed was heading to Libya via Egypt in February, carrying arms connected to Chinese freight companies according to an Egyptian official, speaking on condition of anonymity. This was reportedly due to be raised at the UNSC, according to the source, where Egypt occupies a non-permanent seat, but the US blocked any escalation of the matter after Egypt promised to address concerns raised.

In his 45-minute official meeting with Trump, Sisi is expected to make four arguments regarding Egypt’s position on North Korea: The first is that Egypt voted for the September 11 UN resolution to strengthen sanctions against Pyongyang over its nuclear program. The second is that Egypt’s Foreign Ministry issued a statement on August 29 expressing concerns over rockets fired from North Korea toward Japan. Thirdly, that Egypt has reduced North Korea’s diplomatic mission in Cairo, as per an agreement between American officials and a high-level Egyptian envoy to Washington DC in August. Finally, Egypt determined to halt military cooperation with North Korea and to suspend the work of its office of military cooperation in Pyongyang earlier in September, which coincided with the resumption of the biennial US-Egyptian military training operation Bright Star, which had stopped in 2009.

Sisi is looking to maintain support from Trump, after three years of no invitation to the White House from former President Barack Obama’s administration, according to the Foreign Ministry source.

“The atmosphere that shaped Egyptian-US relations last year is mostly gone,” says Michael Wahid Hanna, a senior fellow at The Century Foundation, a think tank based in the US.

The meeting between Trump and Sisi is the first since the US announced in August that it would conditionally withhold up to US$290 million in Egypt’s foreign assistance package. Sources close to the US administration told Reuters that the move reflects a “US desire to continue security cooperation as well as frustration with Cairo’s stance on civil liberties, notably a new law that regulates non-governmental organizations that is widely seen as a growing crackdown on dissent.” Egypt promised to review the law prior to passing it, which it did.

In the meeting with Trump, Sisi is expected to promise a further review of the law, and is blaming his aides for passing it without suggested amendments, while maintaining that the law was drafted specifically to address Muslim Brotherhood threats, according to the Foreign Ministry source.

The decision to halt aid was also motivated by US anger vis-a-vis Egypt’s cooperation with North Korea, according to Egyptian Foreign Ministry sources.

Meanwhile, Hanna believes the decision to withhold and reprogram aid will not have a negative effect on diplomatic ties between the two countries. Though the scale of the impact isn’t clear, White House adviser Jared Kushner and Egyptian Foreign Minister Sameh Shoukry carried out a scheduled meeting in Cairo on the same day the news broke.

Aside from meeting with Trump, Sisi is also scheduled to hold several bilateral meetings with other heads of state, including Italian Foreign Minister Angelino Alfano.

Relations between Egypt and Italy have been marked by tension since Italian researcher Giulio Regeni was tortured and killed in Egypt in early 2016. Several reports have indicated that Egyptian authorities were involved in Regeni’s murder.

However, Italian Ambassador to Egypt, Giampaolo Cantini, resumed his post in Cairo in September, having operated from Rome for more than a year following Italy’s decision to recall his predecessor in April 2016, over alleged lack of cooperation from Egyptian investigators into Regeni’s death.

“It’s obviously notable that they’re meeting after the controversy,” says Hanna. “From Egypt’s perspective, they were able to wait everyone out. They delayed [investigations] and the Italians eventually came around.”

According to Ramy Yaacoub, the deputy director of the Tahrir Institute for Middle East Policy (TIMEP), there are factions in the Italian government that do not want to add to the tension any further because of common interests, such as the Italian energy company Eni’s $12 billion stake in the giant Zohr gas field.

Sisi will also attend a meeting on Libya with the UN’s Secretary General António Guterres on Wednesday.

Egypt has held an important position in the Libyan conflict, brokering actual political and speculated military support based on its relationships with several allies, including General Khalifa Haftar and his self-styled Libyan National Army (LNA). This support has eroded the mandate of the UN-backed Government of National Accord (GNA), which was produced by the December 2015 deal and is internationally recognized, despite failing to be endorsed by the House of Representatives (HoR) in Tobruk. Egypt conducted airstrikes in Libya in May, 2017, following an attack on Coptic Christians in Minya, asserting that the move targeted Islamic State fighters responsible for the attack. However, the strikes were carried out in Derna and the Jufrah region, neither of which are known to harbor Islamic State fighters, but rather were areas where Haftar’s forces were conducting operations at the time.

UN Libya Envoy Ghassan Salamé was in Cairo in mid-August to discuss the Libyan crisis with Egyptian officials. Hanna believes Egypt failed to persuade other members of the discussion to consider its approach to the issue.

“Egypt was hoping there would be a big change with Trump willing to really push hard on Haftar and the military campaign, but there hasn’t been a decisive moment yet,” he says.

Egypt’s desire for the US to pledge support to Haftar may be a pipe dream. In an interview with Mada Masr, Jalel Harchaoui, a PhD candidate in the department of Geopolitics at Paris 8 University, whose doctoral research focuses on the international dimension of the Libyan conflict, argued that the July Paris agreement was a sign of the US’ wider reticence to take on a leading role in Libya. “The Americans (including the current administration) want France to play a greater role in the security of Africa. When it comes to Libya specifically, this was true in 2011 — remember the “leading from behind” dynamic desired by President Obama. And it is very much true today under Trump,” Harchaoui said. “[Trump] made it clear he doesn’t want the United States to play a prominent role in Libya. If France, the UAE, Egypt and Saudi Arabia can take care of Libya, the Trump presidency will be delighted.”

However, the meeting may not have been entirely without benefit. Immediately following his August visit to Cairo, Salamé traveled to meet with representatives from the Libyan city of Misrata, which Egypt turned toward in an attempt to build political blocs to support its ally Haftar and the LNA.

Regarding other regional issues, TIMEP’s Yaacoub does not believe that the Qatar standoff, which saw Saudi Arabia, Bahrain, Egypt, the United Arab Emirates, Yemen and the Libyan HoR in Tobruk sever ties with the small Gulf nation in June, will be mentioned during the General Assembly. “Arab countries do not wish to air their dirty laundry,” he says. Yet, even if the issue does not make its way onto the formal agenda, it will definitely be discussed in closed meetings, Hanna says, as Egypt is keen to raise it every opportunity it gets.

Egypt-Saudi Arabian relations have undergone a transformation. The Egyptian government walked the tightrope between public outrage and legal contests over the decision to cede the Tiran and Sanafir islands to the gulf country, and its reliance on the Gulf country’s patronage. At its most tense moment, as domestic mobilization stymied the maritime border demarcation agreement, Saudi Arabia froze the provision of petroproducts to Egypt. But now with the Egyptian government forcing the treaty through Parliament, Hanna says relations are warmer, with the two countries being part of a diplomatic coalition against “their most hated regional counterpart.”

“It’s a total role reversal for Egypt, and they will want to highlight that they are part of this coalition and on the side of the Saudis and the Emiratis,” Hanna says.

In terms of Egypt’s broad agenda at the General Assembly, Yaacoub says Sisi will most likely highlight Egypt’s counterterrorism efforts and call on the international community for support.

“Sisi always has agendas that are set. He never veers off from his messaging. It’s always an opportunity for him to present a public relations pitch for Egypt,” says Yaacoub.

However, Hanna doubts that the Egyptian diplomatic mission will be able to make inroads during the meetings. “They’re not flexible,” he says of Egyptian diplomats. “They come to these events with a very large chip on their shoulder. They believe that Egypt is a political player far beyond its powers in the world.”

Topics
Related
Egypt-Italy relations
After Regeni, ambassadors to return and state leaders to meet
Asmahan Soliman | September is a honeymoon period for Egypt and Italy as ambassadors return, and leaders expected to meet
US military aid
Why did the US decision to delay or cancel almost US$300 million in aid to Egypt catch Cairo by surprise?
Mostafa Mohie | There is ambiguity over whether or not US military aid will be held and what will condition its release
Libyan conflict
Q&A with Jalel Harchaoui: A Libyan ‘agreement’ in Paris?
Jalel Harchaoui speaks with Mada Masr about the July 25 Paris agreement and its aftermath
Egypt-Qatar relations
Egypt and Arab nations cut ties with Qatar, but what’s next?
Omar Said | The next step will likely be within the framework of the Security Council