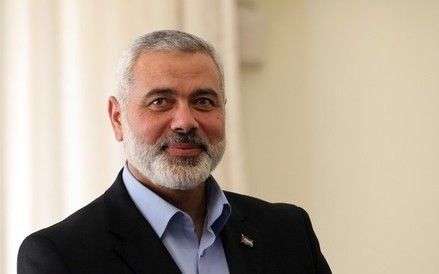 Leader of the Gaza-based Hamas movement, Ismail Haniyeh, arrived in Cairo late on Saturday on his first official visit to Egypt since his election as head of the organization’s political bureau in May.

According to a statement issued by Hamas, his delegation is expected to hold discussions with Egyptian authorities on easing the blockade on Gaza, and reinforce understandings reached with Cairo during visits by other delegations earlier this year.

The parties are also expected to discuss a prisoner exchange deal with Israel, the London-based Al-Hayat newspaper reported on Sunday.

Recent meetings between Hamas delegations and Egyptian authorities have shown a marked improvement in relations, with a June visit resulting in the establishment of a 12 km buffer zone along the Egypt-Gaza border, and a tightening of border controls and increased surveillance.

A Palestinian source previously told Mada Masr, speaking on condition of anonymity, that the discussions revolved around the security situation in Sinai, opening the Rafah border crossing, cross-border tunnels and apprehending individuals in Gaza wanted by Egypt.

The recent discussions reflect the deepening of internal divisions in Palestine, as Cairo’s improved relations with Hamas are a source of concern for Palestinian President Mahmoud Abbas who is currently facing rifts within his political party. The most recent discussions are particularly worrying as Mohamed Dahlan, an ousted Fatah deputy and leader of the reform current within the party which is challenging Abbas’ leadership, is also rumored to be visiting Egypt.

In another sign of shifting relations with Palestinian political movements, Egypt refused to discuss any of the understandings it reached with Hamas during Abbas’ July visit to Cairo, according Al-Hayat.

The newspaper reported, citing anonymous sources, that during their meeting, President Abdel Fattah al-Sisi told Abbas the opening of relations with Gaza was prompted by security concerns in Sinai, and “the suffering of two million Palestinians.” However, the sources added that Sisi called the Palestinian president’s legitimacy “untouchable.”

Azzam Ahmed, a member of Fatah’s Central Committee, told Al-Hayat that Sisi reassured Abbas that the Rafah crossing would not be opened “without the establishment of a legitimate border authority,” to be administered by his government.

Egypt-Hamas relations deteriorated following the 2013 ouster of former Islamist President Mohamed Morsi. The opening of the Rafah border crossing several times in recent years, however, marks a positive development, compared with 2015 when the blockade on Gaza was at its peak.

In February 2015, the Cairo Court of Urgent Matters labeled Hamas a terrorist organization for allegedly taking part in helping prisoners in Wadi al-Natroun Prison escape during the January 25 revolution, which the Gaza-based movement denied. The decision was later reversed after the Egyptian State Lawsuits Authority filed an appeal.

Topics
Related
suicide bombings
Suicide bombing kills Hamas policeman near Gaza-Sinai border
The attack comes after a decision by Hamas to intensify its security presence over Gaza’s borders with
Hesham Barakat assassination
An organization without a name: How a group of beginners killed Egypt’s prosecutor general
Mohamed Hamama | A story of a nameless organization and Egypt's most ambitious assassination operation in a quarter century
Hamas
Hamas delegation to Cairo concludes discussions on prisoner exchange with Israel
A Hamas delegation’s visit to Cairo – in which members discussed a possible prisoner exchange
Hamas
Hamas begins to create buffer zone on Gaza-Egypt border
Hamas has begun work on a 12-kilometer-long buffer zone along Gaza’s southern border with Egypt