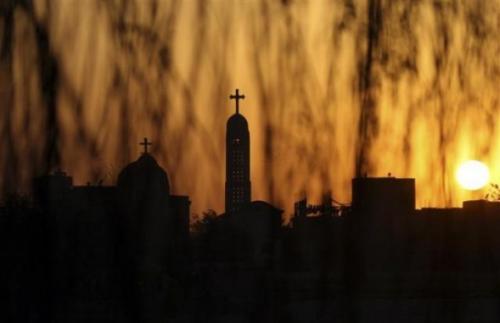 Egyptian security forces prevented hundreds of Coptic Christians from holding prayers to mark the Queenship of Mary feast day in a village in Minya, one resident told Mada Masr on Tuesday.

Approximately 400 Copts from the village of Ezbet al-Forn planned to hold prayers in the house of resident Magdy Abdou. However, they were stopped by security forces.

Abdou denied official reports claiming that the service was banned after clashes broke out with some Muslim residents who were angered by prayer services being held in homes.

Due to the laws regulating church building, Coptic Christians, particularly those living in Upper Egypt, often resort to praying in unlicensed buildings owned by the Coptic Orthodox Church, which often leads to tensions with Muslim residents.

Minya Bishop Anba Makarios told Mada Masr that Tuesday’s incident was not related to clashes, as cited by security forces. “Our Muslim brothers were not involved this time. Although, the authorities wrongfully claimed they were. This often creates tensions,” he said.

Minya, the governorate with the highest population of Coptic Christians in Egypt, has seen a series of attacks targeting Copts in recent years. Thabet suggested that the strong stance adopted by Bishop Makarios, who broke with the church’s official position and openly criticized the state for failing to protect Coptic Christians, could be behind the recent harassment.

According to Makarios, security forces prevented a priest from holding Sunday mass and forcibly ordered the residents to return to their homes. However, families still returned to the area for Sunday night prayers and continued to do so up until Tuesday. Abdou said that the services were held in a narrow street, while security forces gathered in larger numbers around the house.

If Muslim residents were angered by the prayer services, as was reported, why had “they allowed people to openly pray in the street,” Markarios asked.

Abdou told Mada Masr that his house is the only place in the village where Coptic residents are able to pray. Makarios also said that there are no other available alternatives, calling the situation “contradictory.” He said that prayers are less likely to spark tensions in Ezbat al-Forn, as Coptic and Muslim residents of live in separate parts of the village.

The Coptic Orthodox Church announced in July that all summer trips and activities were to be canceled due to security threats. The decision came in the wake of an Islamic State attack on a caravan of Coptic Christian en route to the St. Samuel Monastery that left left 28 dead.

As a result Coptic Christians have been unable to travel to nearby villages to pray, Makarios said.

Mina Thabet, a researcher on minorities and religious freedoms at the Egyptian Commission for Rights and Freedoms, spoke with village residents who said that, throughout the 1990s, Abdou’s house was used for prayer. While the state banned Copts from using the building 10 years ago, recent developments that prevented travel to nearby villages prompted the residents to reopen the house.

Abdou confirmed these reports, adding that Coptic women and girls have been continuously harassed while commuting to other villages to pray, which heightened tensions.

In a strongly worded statement marking the fourth anniversary of the dispersal of the Rabea al-Adaweya sit-in, which resulted in a wave of violence against Churches and Coptic citizens, Makarios heavily criticized authorities. “We are trying to find substitutes where Copts can pray, so that we do not defy the ban imposed on the movement of Copts. This could be a hall, a house or perhaps a small room, but even these are banned,” Makarios wrote.

The bishop asserted that, while the right to worship is guaranteed by the Constitution, “this right is banned in reality, at the personal will of some local officials. Mostly, this comes in the form of directly targeting Copts to prevent them from praying. This sometimes escalates, leading to the use of force against the people and the priests.”