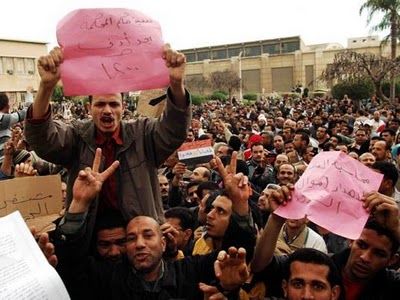 Thousands of Mahalla Textile Company workers suspended their two-week strike on Sunday after a representative of the company pledged to provide a response to their demands for payment of a delayed annual bonus and an increase in their share of the company’s profits within a week.

One of the striking workers who spoke to Mada Masr on condition of anonymity said that the workers will resume the strike if the company does not respond to their demands in the agreed timeframe.

The agreement was drafted and signed by six members of Parliament who played a part in brokering an agreement to end the standoff. One of the MPs told Mada Masr that they had reviewed the workers’ demands with the Mahalla Textile Company management, and that a decision is expected within a week.

The MPs also pledged to submit a request to Parliament to include public sector companies in the motion to grant civil service workers a 10-percent social bonus.

In a Sunday morning meeting, the company had tried to convince delegates from among the textile workers to resume work, which they initially refused.

A textile worker told Mada Masr on Sunday morning ahead of the strike suspension, also speaking on condition of anonymity, that the company’s premises were surrounded by a significant number of state security forces, but he qualified that there had not been an attempt to forcibly end the worker’s action.

Around 16,000 workers initiated the strike on August 6, calling for the payment of their delayed annual bonus, an increase in their share of the company’s profits, as well as other demands related to promotions and food allowances.

Both the company’s administration and the Manpower Ministry initially rejected the workers’ demands. Holding Company for Textile and Weaving head Ahmed Mostafa was quoted in the privately owned Al-Masry Al-Youm newspaper as saying that the workers must end the strike before the administration will conduct any negotiations concerning their demands, in addition to accusing them of being members of the banned Muslim Brotherhood.

Public Business Sector Minister Ashraf al-Sharqawy told the state-owned Al-Ahram newspaper that the ministry will not consider the workers’ demands unless they end the strike and resume production. He added that the workers do not deserve the two bonuses they are demanding, as they are only paid to those who work in the state’s administrative bureaucratic body.

The workers were scheduled to receive their annual bonus in July, a payment that amounts to 10 percent of their salaries, and decided to strike a month after its failure to be dispensed. According to the workers’ lawyer, the company was a year late in handing out bonuses in 2016, a fact that prompted workers to take action when they felt that their payment would be delayed again.

A number of members of Parliament representing Mahalla and the nearby city of Samanoud met with Mostafa days ago in an attempt to mediate the conflict. MP Mohamed Abdou told Mada Masr on Tuesday that Mostafa has insisted that workers return to their stations without offering them any concessions.

“We did not accept this direction and we some concessions be offered to the workers before the resumption of production, but the head of the company refused, for fear of encouraging the rest of the holding company’s workers to organize more strikes,” Abdou said.

Mahalla Textile Company workers have protested several times in the past decade, with the first strike occurring in December 2006 followed by another the following year. The workers did not strike on April 6, 2008, in the 2008 Egyptian general strike, but the city was the site of larger demonstrations to protest security forces’ intervention in strikes. The company workers have organized at least one strike each year between 2012 and 2015.

Topics
Related
Misr Spinning and Weaving Company
Thousands of workers at Mahalla spinning company escalate strike, bosses refuse to consider demands until they resume work
Workers refused the mediation of local MPs, who attempted to persuade them to return to work before their
labor conditions
16,000 workers on strike at Mahalla Textile Company
Workers at the company have protested several times in the past decade, once every year from 2012 to
Mahalla
Mahalla textile workers temporarily call off strike, 5 strike leaders face disciplinary hearings
Textile workers in Mahalla called off their partial strike on Wednesday, while 5 strike leaders face
Kafr al-Dawwar Textile Company
Textile workers end strike, warn of escalation if bonuses don’t materialize
Jano Charbel | Workers at two of Egypt’s largest textile mills called off their strikes after making a deal with bosses