Don’t Shrink Me to the Size of a Bullet: The works of Iraqi artist Hiwa K

The newest work on display at Iraqi artist Hiwa K’s impressive retrospective at KW Institute in Berlin is The Existentialist Scene in Kurdistan (Raw Materiality 01), a wall made up of 16 bulky television sets. Recalling the sculptural use of televisual equipment pioneered by Korean-American artist Nam June Paik in the 1980s and 1990s, Existentialist Scene imposes itself upon its surroundings with its substantial steel, glass, and plastic materiality. Each screen presents footage from interviews with Kurdish intellectuals, each discussing the emergence of Existentialist thought in the region since the 1980s. One man compares this moment in Kurdish intellectual history to the efflorescence of French existentialism following World War II, when thinkers like Jean-Paul Sartre and Simone de Beauvoir reckoned with immediate aftermath of the conflict, which included massive resource scarcities, a refugee crisis entirely of Europe’s own, and the unfolding revelation of the full extent of the Holocaust’s horrors.

One Kurdish intellectual in Existential Scene contrasts this European moment of catastrophe with Iraq’s ongoing national tragedy, which began with the Iraq-Iran War in 1980, intensified under the oppressive and genocidal government of Saddam Hussein, continued through two US-led invasions and a series of murderous sanctions, and the present nightmarish civil war between ISIS and an Iraq army-led international military coalition. He says Iraq’s state of “chronic war” contributed to the birth of a uniquely Kurdish existentialist thought that has tried to assert the autonomy of the human subject, even amid an omnipresent, phantasmagoric, and often spectacular violence that seems to vitiate any sign of the subject’s being.

Chronic war is a specter that haunts the entirety of Hiwa K’s life and oeuvre as it appears at KW. The artist, who was born in 1975 and came of age in Kurdistan, witnessed firsthand the atrocities under Hussein and the wars and invasions that beset the region during the late 20th century. As the numerous autobiographical vignettes in the show’s catalogue demonstrate, the artist’s life was molded by chronic war, from childhood to his adult as an artist. In one story, he recalls the destruction of an Iraqi military base by an Iranian bomber as he sat on the roof of his home, the blast causing him to simultaneously disassociate and panic at the sheer size and sound of the bedlam. He became a refugee in the mid-1990s, travelling by foot from Iraq, through Turkey and southern Europe, eventually reaching Germany after five months of exhausting and sporadic movement. He began studying fine arts at the Mainz Art Academy, an institution steeped in a Western art historical tradition that he openly challenged in his student work.

That he is able to engage with war with such playfulness, willed amateurism, and accessibility is one of the show’s small wonders. Hiwa K has never been an artist concerned with technical mastery, as his 2005 student work Arbeitsplatz (Workspace) attests. In that performance-cum-installation-cum-painting, he carefully maintained the austere white surface of his studio walls in lieu of presenting artworks to his professors, an act of institutional critique that eventually led to his ouster from the course.

In an equally blithe performative gesture for a more recent work, he participated in a 2011 protest in the city of Sulaymaniyah in Iraqi Kurdistan. At the demonstration, he and collaborator Daroon Othman played Ennio Morricone’s climactic theme tune from Sergio Leone’s spaghetti western Once Upon the Time in the West (1968) on a harmonica and guitar, respectively. They piped the music’s ominously repetitive drone through a bullhorn so it could be heard above the din. At KW, the video documentation of the event shows the artists walking through throngs of demonstrators as they shout slogans, run from gunfire, and carry wounded comrades through clouds of tear gas. The title of the work, This Lemon Tastes of Apple, refers both to the smell of the nerve gas Hussein dropped on the region in 1988 and to the use of lemon juice as an impromptu panacea for the effects of tear gas. In its whimsical use of Morricone’s score, Hiwa K’s work recalls the history of atrocities in Kurdistan while also providing a sort of anthem for the region’s current struggle for democratic reforms and acknowledgement from the Iraqi government. Before breaking up due to violent suppression, the protesters gather around the artist and his companion, visibly heartened by the music as if tapping into a hitherto unfelt emotional commons.

The Bell Project (2014-15) is another work in which Hiwa K’s gamesome energy tarries with a horrific topic, this time the material fallout of the armed conflict that has plagued Iraq since the 1980s. For the work, the artist approached a Kurdish entrepreneur named Nazhad who, since the Iraq-Iran War, has scavenged the region for spent – and sometimes unspent – munitions left behind by warring parties. These bellicose materials, which come to Iraq via international corporations from throughout the world, are then smelted in Nazhad’s workshop, their constituent metals resold as scrap to buyers outside Iraq. Bullets in, metals out. Hiwa K gathered materials from Nazhad’s scrapyard, including disarmed mines, tank shells, and exhausted bullets, had them melted, and then reconstituted the molten copper and tin into a church bell with the help of a casting studio in northern Italy. The massive bell is embellished with lamassu (the Assyrian protective deity in the form of a human-headed, winged ox or lion) and other artistic remnants from ancient Mesopotamian cultures, an overt reference to ISIS’s campaign to both destroy antiquities from the region and profit from their sale. 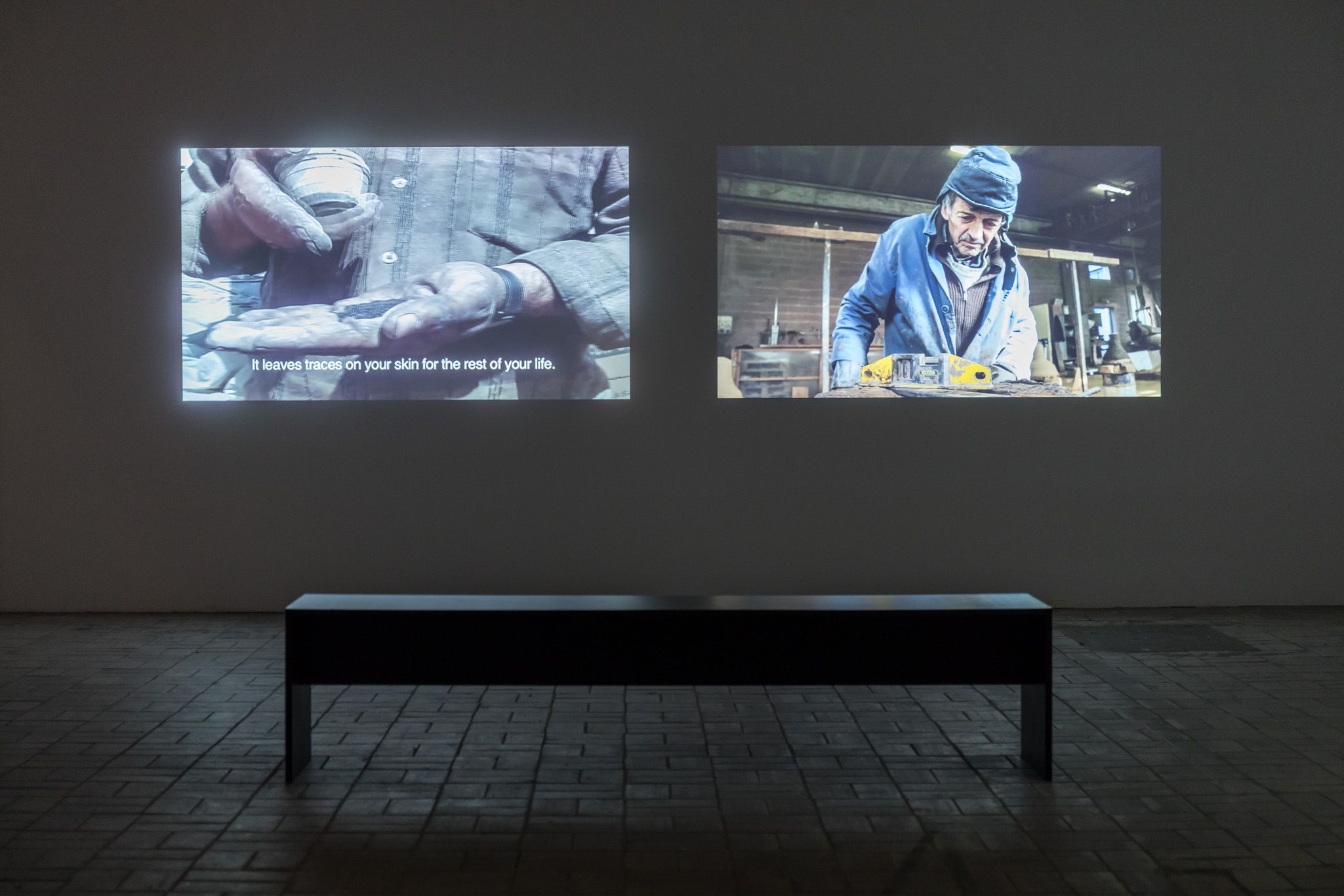 While the bell is missing from the show (it was shown in the 2015 Venice Biennale), the artist presents a dual-projection video work in Berlin that draws from video documentation of the project. On one screen, the audience sees an exploration of Nazhad’s scrapyard, a post-apocalyptic abattoir for spent weapons and a sort of material history of Iraq’s past 40 years told in bullets and mines. I imagine Walter Benjamin’s “angel of history,” its back to the future, looking with horror upon this concatenation of human misery, a pile that grows with each passing year. On the other screen, the artist presents the process by which the smelted material was brought to Italy and reformed into the bell. Both videos focus on his collaborators, again blurring the authorial function that the artist has repeatedly attempted to frustrate in his works. In a mischievous reversal of the traditional historical trend, he melts down weapons to produce art.

Finally, in the show’s most affecting and representative work, Moon Calendar (2007), Hiwa K visits Amna Suraka Prison in Sulaymaniyah. Once a detention center in which Hussein jailed, tortured, and murdered political prisoners, it is now redubbed the National Museum of War Crimes and mostly a ruin, with overgrown weeds retaking the crumbling concrete facades. Hiwa K goes to the site with a stethoscope he uses to listen to his own heartbeats. Throughout the empty, rotting halls of the jail, the artist performs a flamenco dance, attempting to match the stomps of his heels to the rhythm of his heart. He never quite succeeds, his body always one step behind its own unconscious functions, separate from itself in the midst of laborious performance. As the viewer watches video documentation of the performance in KW, captions remind us that rape was often used as a torture device in Amna Suraka, one part of a hideous mélange of brutal tactics as wide as it was savage. The artist’s performance evokes these old, obscene, and infinitely barbaric attempts to pry human consciousness from the body. 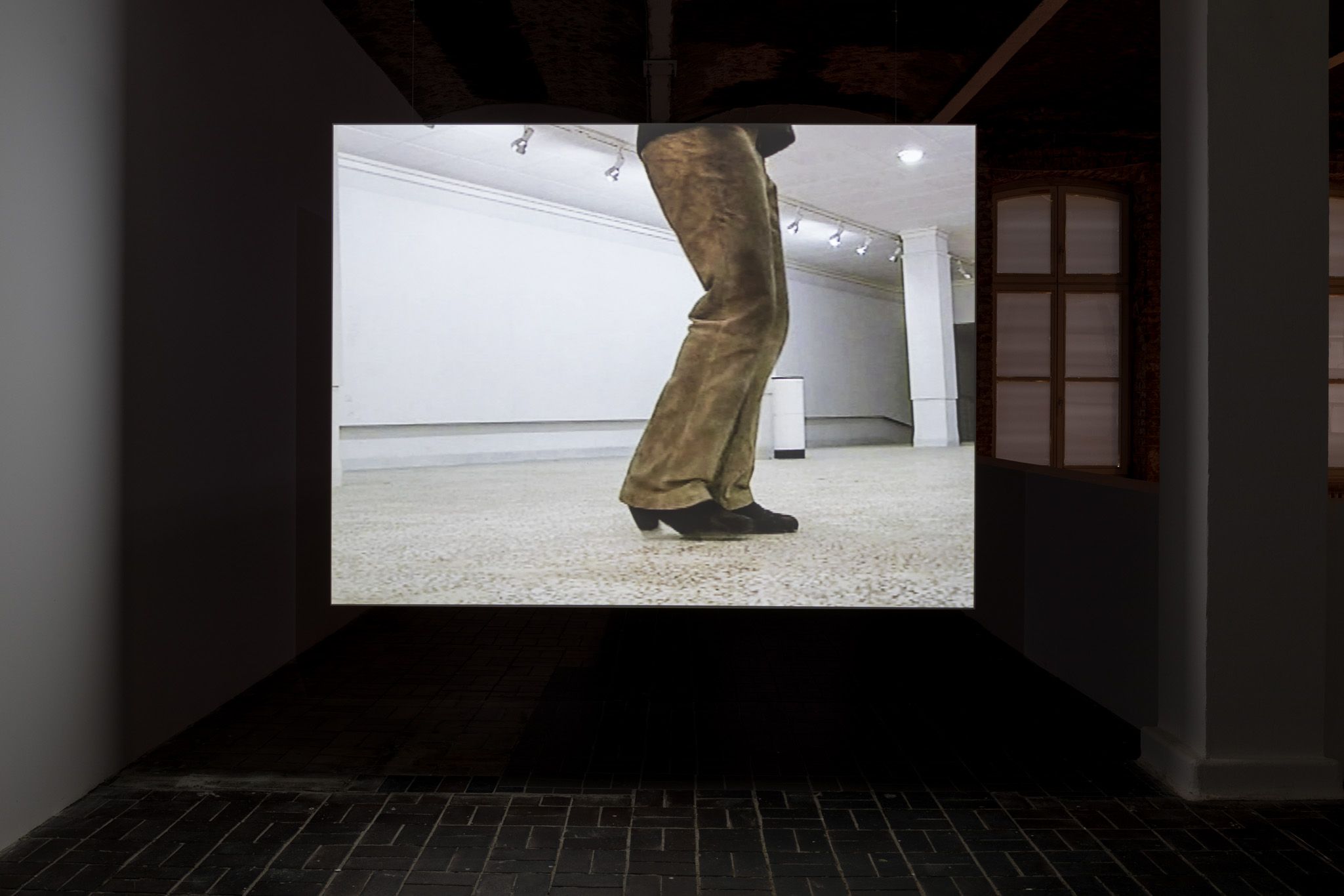 Much of Hiwa K’s work interrogates the body’s vulnerability, its terrible openness to pain and dominance by outside forces. But there is also a utopian sliver unearthed in his attempts to performatively excavate the recent history of atrocity in Iraq. This Lemon Tastes of Apple, Moon Calendar, and The Bell Project each engage this history through playful, creative tactics. Spaghetti western music, flamenco dancing, and material transformation — each mode of historical archaeology encounters abominations with a gaiety that seems to be in total inverse proportionality to their barbarity. Hiwa K’s work suggests that this playful appropriation of heinousness is one way to make bearable the historically unbearable, one avenue through which to process this genealogy of overwhelming violence without being overwhelmed by it.

AD
You Might Have Missed
What we talk about when we talk about trees
Where do old lesbians go to die?
Carbon Colonies & A Green New Deal
Mugamma revisited: Reimagining the building and the square
AD
Dan Jakubowski
9 articles on Mada

Topics
Related
visual art
Distressed and homeless in Athens, settled but compromised in Kassel: On documenta 14
Dan Jakubowski | Dan Jakubowski navigates institutional ethics and painfully human art
cinema
The games that happen behind the camera: A conversation with filmmaker Ahmed Elghoneimy
Mai Elwakil | "The cast gets implicated in the films, and we develop them together"
conversations about the arts
Another stream of synonyms: A conversation with Rana ElNemr
Lina Attalah | Talking about undermining the documentary, intuition, maps, clichés and curiosity.
visual art
On part of PhotoCairo6: Enormous parents and the fear of falling
Mariam Ibrahim | Thinking about nation, family, Hosni Mubarak, obedience and rewriting the past