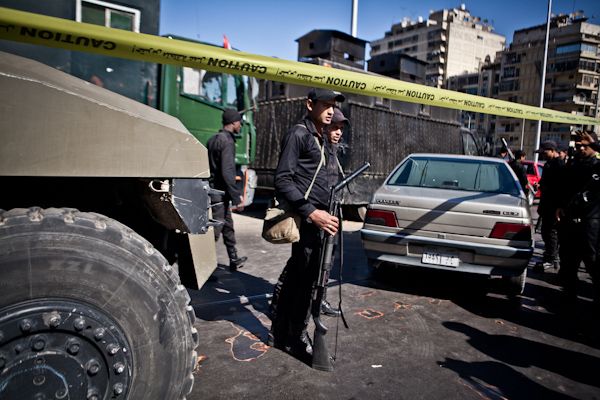 Two retired military officers and a military conscript were killed at a toll station on the International Regional Highway in the Giza governorate city of Ayyat on Wednesday, the Armed Forces spokesperson said in a statement.

According to the statement, a “terrorist individual” opened fire on the toll station, which is run by the Defense Ministry’s National Company for Road Construction, killing the three men. The Armed Forces spokesperson added that security forces are searching the area where the attack occurred to apprehend those responsible.

The Wednesday attack was preceded by a statement on Tuesday night from the Islamic State-affiliate Province of Sinai in which the group claimed responsibility for three attacks against Egyptian police and Armed Forces personnel and their “collaborators.”

While the statement provided details on the three attacks, it did not mention when they were carried out.

In the first incident, the Province of Sinai asserted that its members attacked an armored police vehicle on Bahr Street in the north of Arish city in the North Sinai governorate. The second incident concerned the execution of two civilians, Raed Attiyya and Mohamed Mousa Said, whom the Province of Sinai asserted collaborated with Armed Forces and intelligence agencies in Arish. In the final incident, the group stated that in an operation to destroy a 4×4 and an armored Armed Forces vehicle, a number of soldiers were killed and injured when two explosive devices detonated. A soldier in Arish’s Safa neighborhood was also killed via sniper fire in the incident.

In related news, the funeral of Colonel Tamer Shahin, 40, a Central Security Forces officer stationed in Alexandria, was held on Wednesday afternoon. Another funeral was held in Ismailia for police conscript Salah Ibrahim Abdo, 22. Both officers were killed in a Tuesday attack in which two bombs were detonated alongside Arish’s coastal road. A CSF conscript, whose identity remains unknown, was killed in the blast, which also injured ten others.

The Interior Ministry has not issued a statement to address the Tuesday roadside bombings or the attacks detailed by the Province of Sinai.