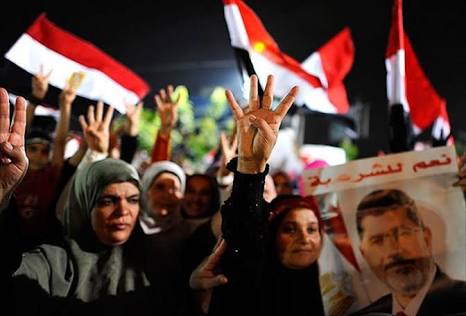 An Alexandria court upheld sentences against 62 defendants, including two death penalties, and acquitted three others on Tuesday in a case related to a series of incidents following the dispersal of the Rabea al-Adaweya sit-in in August, 2013.

Mohamed Hafez, a lawyer at the Association for Freedom of Thought and Expression, told Mada Masr that in addition to the two death sentences, the court upheld 17 life sentences, 15-year-sentences for 21 defendants and sentenced 22 others to 10 years imprisonment.

The charges included gathering illegally, damaging public and private property and assaulting police forces leading to the death of a policeman in a series of incidents that took place in downtown Alexandria on the day of the dispersal.

In related news, the Cairo Criminal court upheld death sentences against 20 people in the Kerdasa case retrial on Sunday. The defendants are charged with the premeditated murder of 12 police officers and two civilians in Kerdasa, Giza in 2013, where pro-Morsi protesters stormed a police station on the same day as the Rabea sit-in dispersal.

Eighty defendants were sentenced to life in prison, 30 received 15 years and a juvenile was handed a 10-year-sentence. In February 2016 the Court of Cassation accepted an appeal against 150 death sentences issued in the case one year earlier.

Charges in the case also included the attempted murder of 10 other policeman as well as damaging the police station and police vehicles.

Human Rights Watch (HRW) reported in June that military tribunals in Egypt have issued at at least 60 death sentences in at least 10 cases since 2013, six of which were carried out. Six defendants were executed in the Arab Sharkas case in May 2015.

The Arab Sharkas defendants were accused of carrying out an attack on a bus transporting soldiers in Cairo’s Amereya district, another that killed six soldiers at a military police checkpoint in the Musturud area of southern Cairo and the killing of two police officers in the Arab Sharkas area of Qalyubiya governorate during an arrest operation.

HRW also called for the cancelling of the death sentences issued against six defendants from the Nile Delta city of Mansoura, convicted of killing an officer securing a judge presiding over the trial of ousted president Mohamed Morsi.