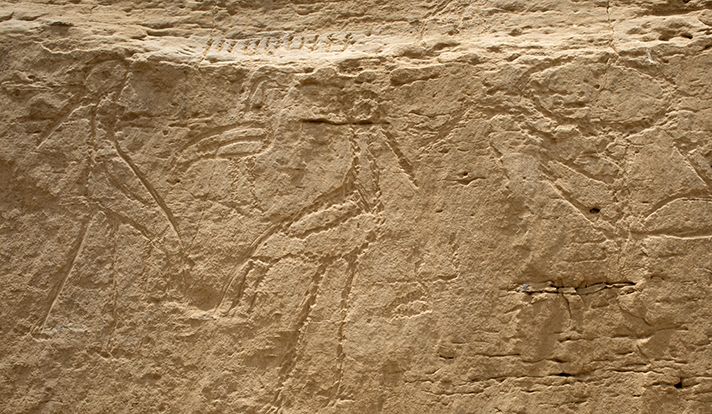 A joint expedition of archaeologists from Yale University and the Royal Museums of Art and History was able to excavate several panels of rock art dating back nearly 5,200 years to the pre-dynastic period, in the Upper Egyptian governorate of Luxor this week

This significant discovery was made near the village of Khawi, approximately 60 kilometers south of the city of Luxor/Thebes and around seven kilometers north of the ancient town of Kab, where archaeologists were conducting excavations with the Al-Kab Desert Survey Project, in coordination with Egypt’s Ministry of State for Antiquities.

The Antiquities Ministry issued a statement on Thursday announcing that these newly discovered inscriptions represent some of Egypt’s first writing systems, as well as being “some of the earliest and largest signs” created during the formative stages of the hieroglyphic script. The inscriptions provide valuable evidence of how ancient Egyptians invented their particular system of writing.

These newly excavated panels of rock art and inscriptions are said to be among the most notable developments in ancient Egyptian forms of written communication, and date back to ancient Egypt’s proto-dynastic period, or the Naqada III period (dynasty zero, circa 3,250 BC – 3,100 BC). 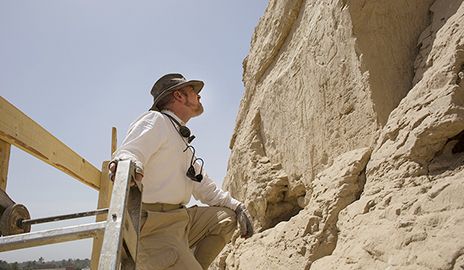 According to the statement issued by Yale University on Tuesday, chief archaeologist and co-director of the Al-Kab Desert Survey Project John Coleman Darnell, commented that his team was “absolutely flabbergasted” by their discovery, due to “the immense size of not just the individual tableaus, but the individual elements as well.”

Darnell went on to add: “In the modern world this would be akin to seeing smaller text on your computer screen and then suddenly seeing very large ones made the same way only on a billboard.”

The recently discovered inscriptions are written from right to left, which became the dominant writing direction in subsequent Egyptian texts. The panels portray animal images and symbols including the head of a bull on a short pole, followed by two back to back saddle-billed storks with a bald ibis bird atop and between them. Darnell explained that “these images may express the concept of royal authority over the ordered cosmos.”

Other notable animal images found at this site include a depiction of a herd of elephants that was reportedly carved between 4,000 BC – 3,500 BC. Darnell commented that one of these elephants contains an image of a little elephant, which, “is an incredibly rare way of representing a pregnant female animal.” 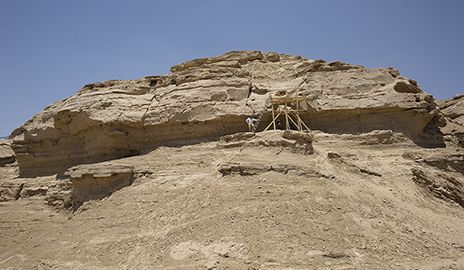 According to Egypt’s Antiquities Ministry, these symbols are not phonetic writing, but “provide an intellectual background for moving from depictions of the natural world, to hieroglyphs,” which are written according to the linguistic sounds of the ancient Egyptian language.

According to Darnell, these discoveries reveal that “there was not a slow development of writing primarily for bureaucratic use as previously believed, but that hieroglyphic writing was more geographically widespread, and topically diverse at the time of or shortly after its development.”

“This also suggests that there is a much more expansive use of the early writing system than is indicated from other surviving archaeological material,” says Darnell.

These forms of inscriptions and rock art were found on high rock faces overlooking the modern railroad in Luxor.

The team of archaeologists who made this discovery are reported to have done so by mapping out routes based on road networks in ancient Egypt, noting that these inscriptions are not randomly placed.

“Most inscriptions are located along major roads, either roads that are parallel to the Nile or roads that head out into the desert. They are usually at a juncture or crossroads. Any place where someone might pause in their journey,” commented Darnell.