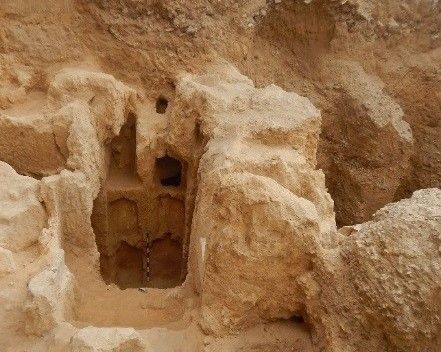 A 2,000-year-old mausoleum containing approximately 300 artifacts has been unearthed by a team of Egyptian archaeologists in Alexandria according to a statement issued by the Antiquities Ministry on Thursday.

Found in the Shatby neighborhood of Alexandria, which is home to a number of ancient cemeteries, graveyards and mausoleums from different eras, the most recent find is said to be from Egypt’s Hellenistic period (circa 305 BC – 30 BC).

According to the ministry’s statement its owners have not yet been identified, however it does bear distinctive Hellenistic features. The Mausoleum consists of four halls, each containing several rows of burial chambers, and is decorated with colorful geometric designs and fragmented funerary texts in ancient Greek.

Among the 300 artifacts discovered within the structure are assorted pottery pieces, oil lamps and vessels and a terracotta statue of a man.

The statement asserts that archaeologists will conduct further studies on the mausoleum and its contents in order to identify the owners and those buried there, and any relevant historical information this may reveal.