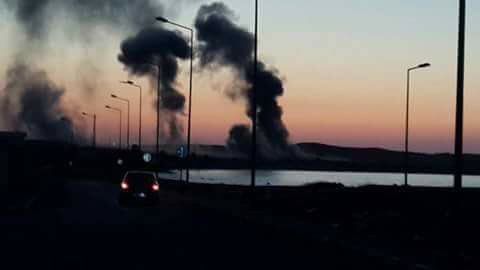 The Mujahideen Shura Council in Derna (MSCD), a Libya-based Al-Qaeda affiliate, has issued a statement denying involvement in an attack on Coptic Christians traveling to a monastery in Minya on Friday.

Published on Saturday, the Shura Council’s statement reads: “It is not MSCD policy to target unarmed civilians in Libya, or in Egypt,” adding that Egypt’s airstrikes were “a diversion to the Egyptian Public from Sisi’s failure to address the security and economic crises.”

The Islamic State published a statement on Saturday claiming responsibility for the attack, which they say killed 31 and injured 24.

In a correspondence with his US counterpart Rex Tillerson on Saturday, Foreign Minister Sameh Shoukry stated that the strikes were self defense, claiming that Egypt had confirmation that militant fighters based in Derna were involved in the Minya shooting.

According to a statement issued by Egypt’s military spokesperson “The Air Forces executed a focused airstrike against terrorist groups in Libya after confirming their role in the planning and execution of the terrorist attack that took place in Upper Egypt’s Minya.”

While the Islamic State gained ground in Libya following the ouster of Muammar Qadhafi, with fighters based in Derna, they soon faced resistance from local armed groups and retreated after experiencing a series of defeats at the hands of the MSCD in 2016.

The city is currently sought after by Sisi’s ally and Libyan military general Khalifa Haftar.

Although Egypt has claimed the airstrikes were a reaction to Friday’s attack, the Haftar-led Libyan National Army’s Air Force released a statement on Friday asserting that the operation was one in a series of planned attacks organized in collaboration with the Egyptian Armed Forces aiming to clear a path to take over the city through land.

Haftar met with Sisi in Cairo earlier in May, and received the Egyptian chief of staff Mahmoud Hegazy in Benghazi a few days later. The details of the meeting remain unclear.

Egypt carried out a total of six airstrikes near Derna, destroying the MSCD’s center, according to several media reports which cited sources as saying the “strikes were professional and precise and were carried out through successive waves.” The strikes began during a meeting between Sisi and Egyptian security leaders and stopped when his speech aired later on Friday, added the sources.

In his address to the nation following the Minya attack President Abdel Fattah al-Sisi said: “A strike was carried out, and we will not hesitate to target any training camps threatening our security.” He claimed that the camps where the militants were stationed and trained were destroyed.

“After the Libyan regime fell, we were aware that evil would come from there. Our forces have been along the borders even during the past regime’s rule,” said Sisi. “Over the past two years alone the number of SUVs that have been destroyed reaches almost 1,000. In the past three months alone we destroyed 300 vehicles,” he added.

Egypt also carried out airstrikes in Derna in February 2015, targeting Islamic State militants after 21 Egyptian Coptic workers were kidnapped and killed in Libya.

The past months have seen a series of attacks similar to the Minya shooting, carried out by Islamist militant groups. The Islamic State announced its intentions to continue attacks targeting Coptic Christians in an article published in its affiliate magazine Al-Nabaa in early May. They claimed responsibility for the twin bombings of the St. George Coptic Orthodox Church in Tanta and St. Mark’s Church in Alexandria in April, killing 19 and 29 respectively, after which Sisi declared a three-month state of emergency.

Topics
Related
attacks on Copts
Islamic State claims responsibility for attack on Copts in Minya
IS has claimed responsibility for the Friday attack on Coptic Christians traveling to a monastery in
Sisi speeches
Quotes from Sisi’s speech on Copts’ attack in Minya: Strike conducted in retaliation
Sisi addressed the nation following the killing of 28 Coptic Christians in Minya
attacks on Copts
Attack on vehicles traveling to Minya Coptic monastery leaves at least 26 dead
Armed militants attacked two vehicles carrying Coptic Christians traveling to a monastery in Upper Egypt’s
Libyan conflict
Haftar and Sarraj in Cairo: The details of Egypt’s partially successful Libyan summit
Hossam Bahgat | Egypt’s aims for the meeting were not limited to direct negotiations and issuance of a joint statement