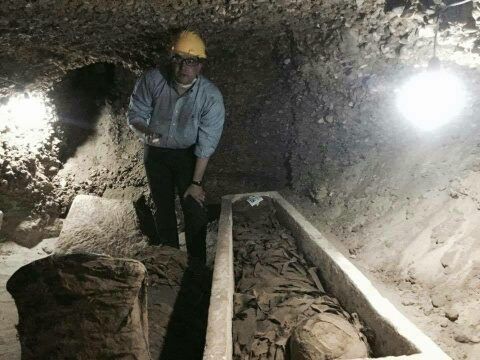 A German-Egyptian team of archaeologists have unearthed catacombs containing at least 17 mummies in what the Antiquities Ministry has described as an “unprecedented discovery.”

Uncovered at the Tuna al-Gabal archaeological site in the governorate of Minya, a host of sarcophagi, animal coffins and remains were also found alongside scrolls, lanterns, coins and a gold sheet. The discoveries are reported to date back to ancient Egypt’s late period (Circa 664 to 332 BC).

Salah al-Khouly, chief Egyptian archaeologist at the excavation, which is a joint venture between Cairo University and the University of Munich, suggested that the discovery will place Tuna al-Gabbal on Egypt’s tourist map. He told the privately owned Masrawy news site that only 10 percent of the catacomb has been excavated so far.

During a Saturday press conference Anany commented that this discovery “may just be the beginning.”

Although the ministry reported 17 mummies in the catacombs, Anany told Luxor Times that they had found “around 30 mummies, some coffins, vessels and demotic papyri” in a Saturday video interview.

He claimed that 18 of the mummies are are well-preserved, though several others and their sarcophagi were found in poor condition due to robberies.

Anany added that the excavation ought to continue in the hopes of unearthing more artifacts, mummies and remains, particularly as the recently discovered tombs are even older than the Catacombs of Kom al-Shoqafa in the city of Alexandria.

Osama Rashad, a tour guide based in Upper Egypt, affirmed that this is the only such burial site to be found in Minya, telling Mada Masr “The dating problem associated with this find is that there are no inscriptions or hieroglyphics on the walls to help determine the approximate date of its construction, by linking it to the reign of a specific king.” A cartouche containing the ruling pharaoh’s name is typically found in such a structure.

According to Rashad approximating the dates of individual ancient Egyptian burials is difficult as mummies are often relocated to other burial places. Sites may sometimes be used and reused by multiple family members.

According to the Antiquities Ministry the excavations of the catacombs began almost one year ago when a group of professors from Cairo University’s Faculty of Engineering conducted radar scans to the east of animal catacombs, where bird and other animal remains had been discovered. Scans revealed the presence of subterranean gaps and shafts.

A statement released by the ministry on Sunday further confirmed intentions to continue the dig, quoting Anany as saying: “further excavations will continue to reveal more of the contents within this site, which is likely to contain many hidden caches and secrets that have not yet been discovered.”

Two of the papyri found are to be moved to the Grand Egyptian Museum, expected to be inaugurated in 2018, for reparation and restoration.

In addition to the site at Tuna al-Gabal, the ministry reported that excavations of another area dating back to ancient Egypt’s Roman rule resulting in the discovery of several funerary structures, and within them coins, vessels, pottery and other everyday items.

Topics
Related
archaeology
Archaeologists unearth host of ancient Egyptian monuments in Luxor, Aswan
The Antiquities Ministry announced the discovery of a 6,000-year-old slab of Neolithic rock art, a 3,900-year-old
cultural heritage
Megawra: Making sure heritage is a resource, not a burden
Lara El Gibaly | An architect, a historian and a storyteller walk into a shrine…
archaeology
Antiquities Ministry: 4,200 year-old mummy shows oldest signs of breast cancer
Oldest evidence of breast cancer may have been found in Ancient Egyptian skeleton
cultural heritage
Keeping track of the artifacts: On the Egyptian Museum’s Registration, Collections Management and Documentation Department
Meredith Brand | A look at the Egyptian Museum’s remarkable Registration, Collections Management and Documentation Department.