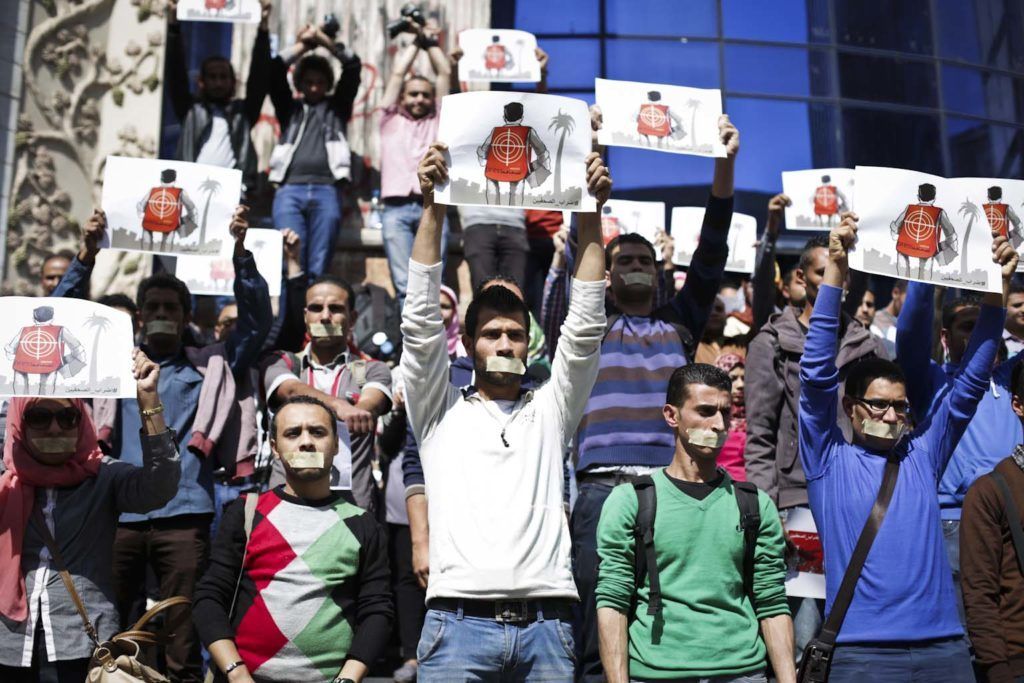 State Security Prosecution ordered the release of journalist Tarek Hafez on LE5,000 bail after he was summoned for questioning on accusations of insulting the “luster” of the Supreme Judicial Council on Sunday. The summons followed an article published reporting that the relatives of a number of judges and several police officers had been given appointments within the prosecution.

Hafez also faced additional accusations of harming judicial authorities by publishing false information and the deliberate harassment of others through the misuse of communication devices.

Hafez told Mada Masr that the interrogation, which began on Saturday and lasted for 15 hours before his release, was “shocking.” The journalist, who works for the privately owned Al-Fagr newspaper, published documents in the print version of the paper on April 20 proving that sons of 47 judges and seven top security officials were appointed to positions within in the public prosecution this year.

His report revealed that among those appointed were two police officers, one of who has previously been accused of torture. Officer Baher Shehata was the second defendant accused of torturing Luxor citizen Talaat Shabeeb to death in 2015. He was acquitted in July 2016, while another officer and five other police personnel were jailed. Police personnel are eligible to join the ranks of prosecution in Egypt.

“I expected to be honored by the Supreme Judicial Council for discovering that they had been deceived by security forces, who ought to carry out security investigations concerning appointments, and who provided false information concerning one of the police officers appointed to the prosecution,” Hafez told Mada Masr.

According to the journalist his interrogator did thank him for revealing the information concerning Shehata, which he says is evidenced in the interrogation records. He added that he requested a copy of the records and is intending to publish them, for the sake of transparency.

In a statement published on his Facebook page Hafez announced that he was barely permitted any rest during the 15-hour interrogation session, adding that he was only allowed to go to the bathroom.

The journalist noted that throughout the interrogation, the only topic he was questioned about was his sources. To pressure him into divulging information, interrogators told him that he may be accused of acquiring the documents illegally, however he exercised his right to refuse to reveal their identities.

“I don’t doubt that there was an intention to intimidate me because I published this information,” he said. “The Supreme Judicial Council believes that I deliberately published it around the same as amendments to the judicial authorities law were passed.”

Hafez added that the Journalists Syndicate did not send a lawyer to accompany him during the interrogations, and no syndicate representative attended, in violation of the syndicate’s bylaws.

Journalists Syndicate board member Mohamed Saad Abdel Hafez said in a statement published on Facebook that he and some board members had no prior knowledge of the interrogation. However, Hafez contends that he texted syndicate head Abdel Mohsen Salama, who ignored his message.

Topics
Related
judicial independence
Sisi and the judges: Game over?
Rana Mamdouh | Sisi has ratified the chief judicial appointments law, despite resistance from judges and MPs
freedom of the press
2 journalists interrogated on false news charges related to Port Said stadium case
Two journalists were interrogated on charges of publishing false news relating to the Port Said stadium
State Council
A corpse, bag of cash and contested land: Clues threading corruption into the challenge to judicial independence
Rana Mamdouh | The revelation of bribery in the State Council may be a grab for power cloaked in anti-corruption garb
freedom of the press
Former culture minister, 3 journalists referred to court for insulting judiciary
Former Culture Minister Gaber Asfour, and three Al-Bawaba journalists have been referred to the criminal