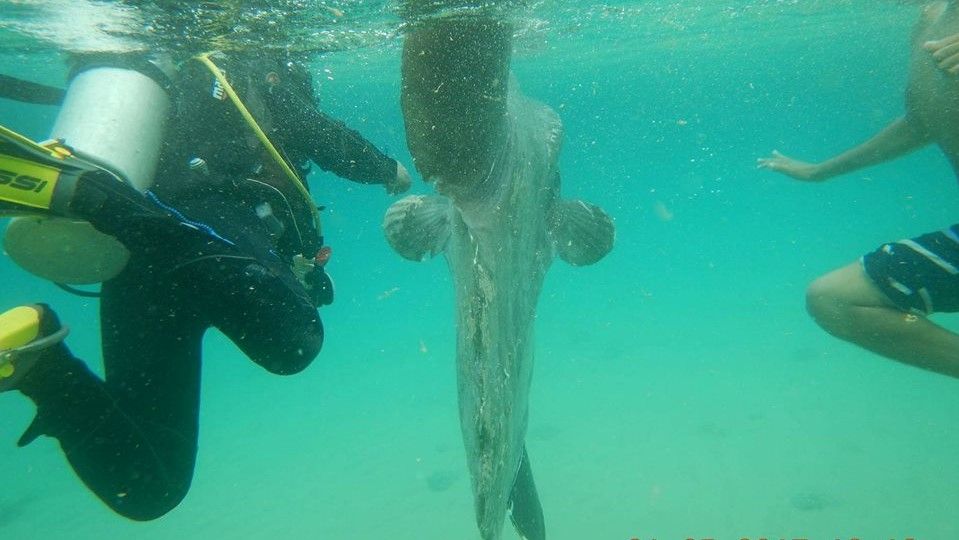 Egypt’s Environment Ministry announced that rescue attempts to save a rare Ocean Sunfish were not successful and the fish died during transportation efforts.

Marine biologists were planning to fit the injured fish with a prosthetic fin, after it washed ashore in Nuweiba on Monday.

The rare Ocean Sunfish, also known as a Mola, measured over 2.1 meters long and weighed approximately 300 kilograms, the ministry reported. It washed ashore after a serious injury that prevented it from returning to deeper waters.

Ministry and Navy personnel, along with a team of volunteers, transported the fish to Hurghada Grand Aquarium on a naval vessel, but it then died while in transit to a center for marine science, where it was to be fitted with an experimental fin.

Dr. Mahmoud Hanafy, professor of marine biology and an environmental adviser, told Mada Masr that this was the first attempt of its kind in Egypt. “If the prosthesis has even just a 50 percent chance of succeeding, then it is worth trying,” Hanafy said.

The marine biologist that first identified the fish suggested it is likely that a predator attacked it, biting off its fin before ocean currents pushed it ashore, as the presence of such a fish in shallow waters is unusual.

The Ocean Sunfish usually inhabits waters at depths of between 30 to 600 meters, and its diet is primarily jellyfish, but it also eats small fish, crustaceans and squid. The seldom seen bony fish inhabits tropical, subtropical and temperate waters.

AD
You Might Have Missed
Mugamma revisited: Reimagining the building and the square
If they steal Sheikh Jarrah
Carbon Colonies & A Green New Deal
Where do old lesbians go to die?
AD