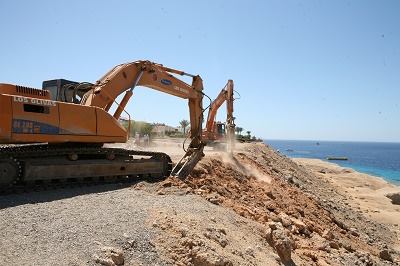 Citizens displaced from their homes in North Sinai have been allocated two plots of land in Arish and Bir al-Abd. In a Thursday statement the Cabinet announced that the land will be made available for citizens the authorities forcibly displaced from the border cities of Sheikh Zuwayed and Rafah.

The decision, published in the official gazette, allocates the land to the Housing Ministry which is tasked with building homes for the displaced citizens.

The displacement from Rafah and Sheikh Zuwayed occurred in in two stages. In October 2014 a buffer zone was created to prevent the smuggling of arms across the border. A number of families subsequently had to flee due to deteriorating services, escalating violence and worsening economic conditions.

In 2015 authorities demolished thousands of homes in the embattled cities in order to impose a military buffer zone, in an attempt to combat increasing insurgency by Islamist militants in the area.

“The decision makes a temporary condition permanent, and ignores the primary demands put forward by the displaced citizens, which is returning to their lands after stability is restored,” he said.

He asserted that the citizens were compelled to relocate due to escalating violence in the area, and are ultimately supposed to return. “The fact that the state is building houses for them turns them from temporarily displaced persons to permanent residents,” Refai added.

According to the MP, the displaced citizens are in need of care, support and for the authorities to restore stability quickly, permitting them to go back to their homes. He said that approximately 40,000 people have been displaced from Sheikh Zuwayed and Rafah over the last four years, adding that most of them live in informal areas without access to services and no help from the state.

The New York-based Human Rights Watch previously condemned the Egyptian authorities’ forced eviction of civilians from the area. According to the statement they were given little to no prior notice before they were forcibly evicted, and their houses destroyed, in violation of international law.

According to Sarah Leah Whitson, Middle East and North Africa director, “Destroying homes, neighborhoods, and livelihoods is a textbook example of how to lose a counterinsurgency campaign.”

Topics
Related
North Sinai
Electricity returns to Sinai’s Sheikh Zuwayed and Rafah
Arish and Sheikh Zuwayed have been without electricity for three weeks, as electricians trying to repair
attacks on Copts
North Sinai Copts face death or displacement in absence of security and tribal protection
Heba Afify | The circle of Coptic Christians in danger of targeted attacks widens in the absence of protection
Burma
A history of forced relocations
Isabel Esterman | On October 29, the Egyptian army began bulldozing and dynamiting houses along Egypt’s border with Gaza
land expropriation
Sisi promises up to LE1 bln for displaced Rafah residents
Pesha Magid | President Abdel Fattah al-Sisi promised a compensation package for people displaced from their Rafah