More than quintessential Egyptian motifs: On Chant Avedissian in Madrid

Chant Avedissian, the Egyptian-Armenian artist perhaps best known in Cairo for his works that grace the walls of Zamalek’s Abu El Sid restaurant, is having a moment in Spain. His solo exhibition, Transfer, Transport, Transit, is on view at Sabrina Amrani Gallery in Madrid until May 27, and will be followed by an exhibition of new works at Casa Árabe Madrid in September, as part of the venue’s 10th anniversary celebration.

Together the two shows might function as an unintentional retrospective, going beyond the 66-year-old’s familiar series Cairo Stencils and Icons of the Nile, both largely made up of poppy gouache stencils of Egypt’s “golden age” celebrities and typical Egyptian motifs.

The seven works on display at Sabrina Amrani Gallery, ranging from the 1970s to 2016 and including some produced specifically for this show, echo the artist’s trajectory: after studying painting and applied arts, he worked with photography and hand-dyed and sewed textiles and took a long-term job photographing the work of architect Hassan Fathy. Fathy’s ideas nurtured in him a zeal for documenting Egyptian heritage, and he began exploring the techniques, materials and forms of vernacular architecture, crafts and art: reproducing the geometric patterns of nomads’ tents and costumes, the ornamentation of mosque courtyards and house facades, mashrabiya latticework and pharaonic symbols, as well as using thick Egyptian “dammour” cotton, carved wood blocks to print on fabric, and stencils that create designs that can be infinitely reproduced in an attempt to imitate the processes of traditional craftspeople. This has led him to great commercial success. 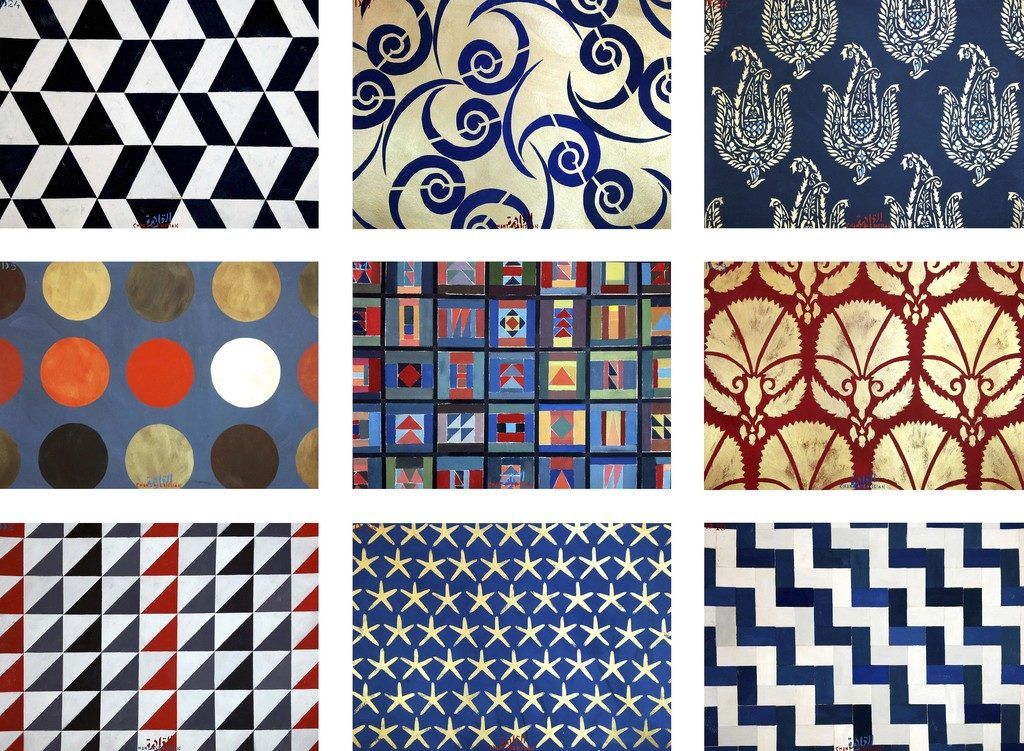 The Sabrina Amrani Gallery (for whom I occasionally work as an assistant at art fairs) opened in 2011 and has grown a roster of mainly emerging artists from across the Global South, from Korea to Brazil to Pakistan to Morocco. Located in an old building in Malasaña, a bustling artsy quarter in Madrid’s city center, it is entered by a street-level mezzanine and its main exhibition space is a long, white-walled room downstairs.

The artworks, some of them assemblages of elements that could work individually, don’t seem to have been arranged following any clear curatorial claim or subject, but just to offer an overview of the artist’s lesser-known production. The works can be appreciated either separately or as part of the whole, and seen in any order. However, a net of crisscrossed references, made up of repeated patterns from Egyptian, Indian or Moroccan textiles and similar decorative solutions used in Persian or Turkish architecture, connect the pieces as they once linked far-flung geographies – reflecting Avedissian’s travels to Uzbekistan, Turkey or India to collect patterns in architecture, urbanism, costumes, tents, daily utensils and jewelry. 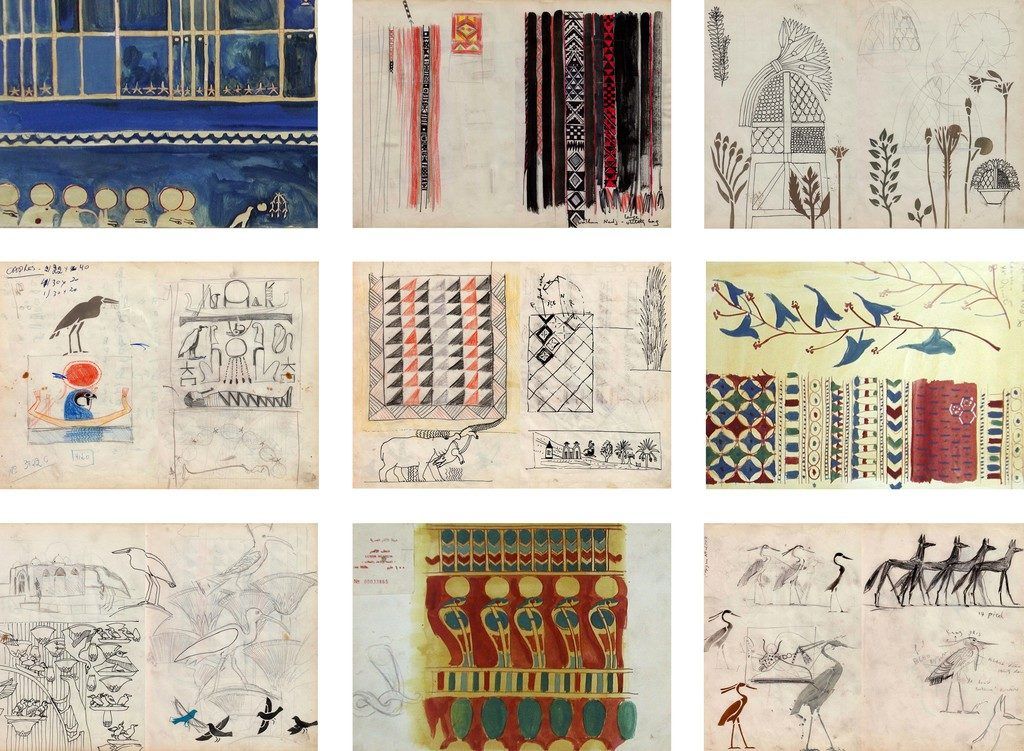 A grid of nine aluminum panels, Sketches 1972 – 1982, open the show alongside an exhibition statement. Each printed with facsimiles of the artist’s sketchbook pages, they collect some of the most characteristic symbols of Ancient Egypt, drawn and painted with a meticulousness and curiosity that transcends nostalgic stereotypes, alongside geometric patterns: different styles of heron, papyrus plants, a jackal, mysterious hieroglyphs, kilim patterns, a sleeping pharaoh, lotus flowers, the uraeus serpent, Horus’s kohl-lined eye and falcon shape carried by the cow-shaped goddess Hathor.

Walking down the stairs, on the landing, stenciled yellow-gouache floral patterns from Bukhara float over red circles resembling the pharaonic burning suns on tall strips of corrugated card (2016). These symbols are overlaid with blue chintamani patterns, a design present in textiles from all over the Islamic world, but especially in those coming from Ottoman Turkey. This symbol, often a representation of power, is composed of three spots, associated with the leopard’s skin, and two waving lines, representing tiger stripes. The chintamani were at times combined with other travelling emblems, such as the lotus flowers and Chinese cloud bands. 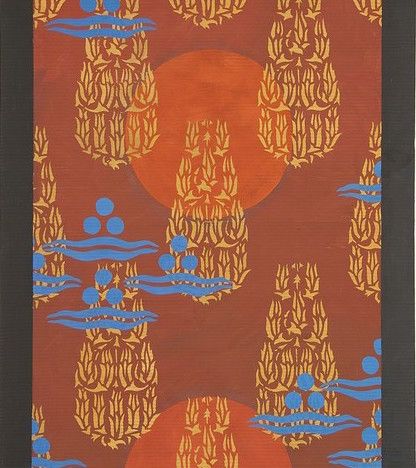 On the lowest floor, a combination of photography, acrylic on wood and gouache on cardboard pieces reproduce architectural and textile patterns, such as the stars over blue background from the ceiling of the Anubis shrine in the temple of Queen Hatshepsut at Deir al-Bahri, the city of Khiva’s mud-brick walls and blue-glazed tiles, wooden Mamluk doors or a kaftan from Tashkent.

There are also some colorful reflections on the endless possibilities of geometry, such as in the acrylic-on-wood piece Formation of a Square I (2016), a work of which Avedissian has made several versions throughout his career, including in the form of textile production. The versatility of nomad tents and the economical need to exhaust every single inch of fabric when sewing and printing it, raised an interest in exploring the unlimited potential arrangements of the circle, the triangle, the square or the rectangle. “The folding, measuring and cutting of an approximately six-meters textile to assemble a costume is a lesson in geometry,” he has said.

Surrounding the works, throughout the exhibition, small colored vinyl stickers of crocodiles, bees, jackals, ships or plants cheerfully animate the walls. As the god Sobek adopted the shape of a crocodile, Re was sometimes represented as a bee or the jackass turned out to be the animalization of Anubis and the afterlife, these vinyls seem to playfully complete the imagery of Ancient Egypt that Avedissian explores in his work.

Avedissian is one of many Egyptian artists using the country’s ancient imagery in contemporary production – these motifs are the most recurrent theme of Cairo’s annual state-sponsored General Exhibition and Youth Salon, for example. Some have gained international attention for such works, from modernist sculptor Mahmoud Mokhtar’s compact versions of the sphinx or the goddess Isis, to contemporary painter Khaled Hafez’s remixing of pharaonic tomb décor, or the graffiti makers Alaa Awad or El Zeft, who subversively used symbols of heritage to critique the situation during the 2011 Revolution. Avedissian’s systematic exploration of motifs from other ancient Eastern cultures, is what makes his work unique – as well as the minimalist, Japanese-influenced compositions that arguably characterize his best work.

The title of the exhibition, Transfer, Transport, Transit, points to the artist’s research and his ambitions beyond nationalistic imagery. According to the exhibition statement, each word summarizes a concept underlying Avedissian’s production: “Transfer” refers to the use of certain ancestral cultural expressions as a way of celebrating the richness of his heritage, as its recognition as an essential part of individual and collective identity. “Transport” alludes to exploring a shared artistic vocabulary in different parts of the world, for example the extended presence of the chintamani pattern over the Asian and Islamic worlds, to identify the visual bonds that bridged remote lands and crossed established boundaries. “Transit” between time and space refers to bringing back to life disappearing shapes, visual expressions and ways of doing, such as work with stencils or dammour cotton, a process that reveals the world’s ever-changing and ephemeral nature and the human’s need to retain part of it to define themselves.

In the small space of the gallery, these ideas produce many visual bonds that seem to me to reproduce the transferences and interactions the erstwhile Silk Route and other trade routes have fostered.

AD
You Might Have Missed
Where do old lesbians go to die?
Carbon Colonies & A Green New Deal
What we talk about when we talk about trees
Mugamma revisited: Reimagining the building and the square
AD
María Gómez López
1 article on Mada

Topics
Related
Antiquities Ministry
How the discovery in King Tut’s tomb is changing the field of Egyptology
Meredith Brand | Part 2 of Meredith Brand's article on what the recent scan results tell us about ancient Egypt and Egyptology
exhibition reviews
The 57th Cairo Salon: Existentialism as hope
Ismail Fayed | The salon did veer away from the trend of recycling the works of Egyptian modernists, yet it also fell
conversations about the arts
The Youth Salon: Bold, ambitious, too big
Taha Belal | The yearly Youth Salon, showing in and around the Palace of Arts in Cairo’s Opera
exhibition reviews
Pretty, pretty, pretty, pretty, pretty girls
Ania Szremski | Though the word lazy isn’t really allowed in the art criticism lexicon anymore, frankly that’s what