Labor Day 2017: Cooperation under another name
What does the cooperation Sisi called for in his Labor Day address mean amid a marked deterioration in labor conditions?

“Egypt still expects much from its workers,” the president said, in one of several statements emphasizing workers’ cooperation with the state.

What Sisi did promise centered on increased foreign investment — a central tenet of the government’s economic structural adjustment whose efficacy is contested — saying that it would translate into increased employment opportunities for Egypt’s youth and decent living standards for the country’s workers.

This is in addition to promising to recommence operations at hundreds of factories that have remained closed since 2011, by allocating resources from the Tahya Masr Fund and to push a spate of labor-related legislation — including the unified labor law, trade union law, health insurance law, and social insurance law — through Parliament.

Nonetheless, there is a more stark reality for Egypt’s workers. Parliament is stacked against labor interests and the legislative body’s Manpower Committee is virtually controlled by the ETUF, whose leadership has not been elected since 2011 and is instead appointed by Manpower Minister Mohamed Saafan. Sisi and Parliament have extended the ETUF executive board’s terms of office several times, with the latest occurring in January 2017.

There have also been severe crackdowns against labor movements, with police and the Armed Forces jailing dozens of workers who participated in industrial action, and the prosecution referring them to trial. Simultaneously, the number of industrial protests has decreased to its lowest level in several years, falling from 1,117 strikes between May 2015 and April 2016, to 744 in the same period the following year.

To mark Labor Day, Amnesty International issued a statement on Sunday calling on the Egyptian state to end its “Relentless assault on rights of workers and trade unionists.” Human Rights Watch adopted a similar tone in a February statement, calling on Egyptian authorities to “Drop charges, change laws that restrict rights to organize and strike.”

The independent Egyptian initiative Democracy Meter issued its latest figures on Sunday regarding the number, location and causes of labor strikes and professional protests that occurred between May 2016 and April 2017.

According to the institute’s tally, at least 151 workers, unionists and professionals have been arrested, prosecuted or referred to trial over the course of the past 11 months. During this same period, 2,691 workers and professionals were dismissed from their jobs “for exercising their right to protest.”

Cairo was the site of the most labor action in Egypt over the past year, according to Democracy Meter’s figures, tallying 151 initiatives. After Cairo comes the Nile Delta governorates of Kafr al-Sheikh, with 68 initiatives, and Sharqiya, with 65.

While the state’s austerity measures have worsened labor and living conditions, workers efforts to push back have been curtailed, according to Mohamed Awwad, the lawyer for the 26 Alexandria Shipyard Company workers.

“Any worker who attempts to publicly demand their rights these days usually thinks twice before doing so, as the state will likely respond to peaceful protest actions with forceful and oppressive measures,” he says.

Awwad says that 19 of the 26 shipyard workers who are standing military trial have been persuaded to tender their resignations in exchange for assurances that they would not be jailed pending their military trial. Since the forced dispersal of the labor protest at the Defense Ministry-owned shipyard in May 2016, some 1,000 workers of a 2,300-person workforce have not been allowed back to work and are earning only half of their basic wages, according to the lawyer.

The string of police crackdowns on labor strikes in the Suez Governorate is symbolic, according to Ahmed Bakr, the secretary general of the Independent Union of Workers at the IFFCO Oils Company. “[The crackdown] aims to send a message to workers, that your protests or strikes will be deemed illegal and the state will only uphold the rights of big businessmen and investors.”

Bakr and all eight other members of the Independent Union of Workers at the IFFCO Oils Company, in addition to 12 other workers, stood trial in the Suez Governorate in January 2017. They have since been acquitted of charges of instigating a strike and obstructing production. However, the prosecution appealed the court’s decision, a second trial was held March before the Suez Appeals Court, which also opted for an acquittal.

“These labor rights (right to strike, and organize) are supposed to be safeguarded in the Egyptian Constitution. However, the reality in Egypt is quite different,” says Seif, the son of jailed PTA bus driver and independent unionist Mohamed Abdel Khaleq.

Abdel Khaleq and his coworker Ayman Abdel Tawwab were held in Tora for nearly seven months for planning a strike in September 2016, before being granted conditional release in March. Per the terms of his release, Abdel Khaleq must submit himself to Cairo’s Sharabiya Police Station two days a week, for nearly four hours at a time. The PTA workers still face the possibility of trial.

Egypt’s independent trade unions are organizing their own Labor Day conference, which is scheduled for the evening of May 1 at the headquarters of the Center for Trade Union and Workers Services (CTUWS) in Cairo. The event is being held under the title “Social Justice and Union Freedoms.” 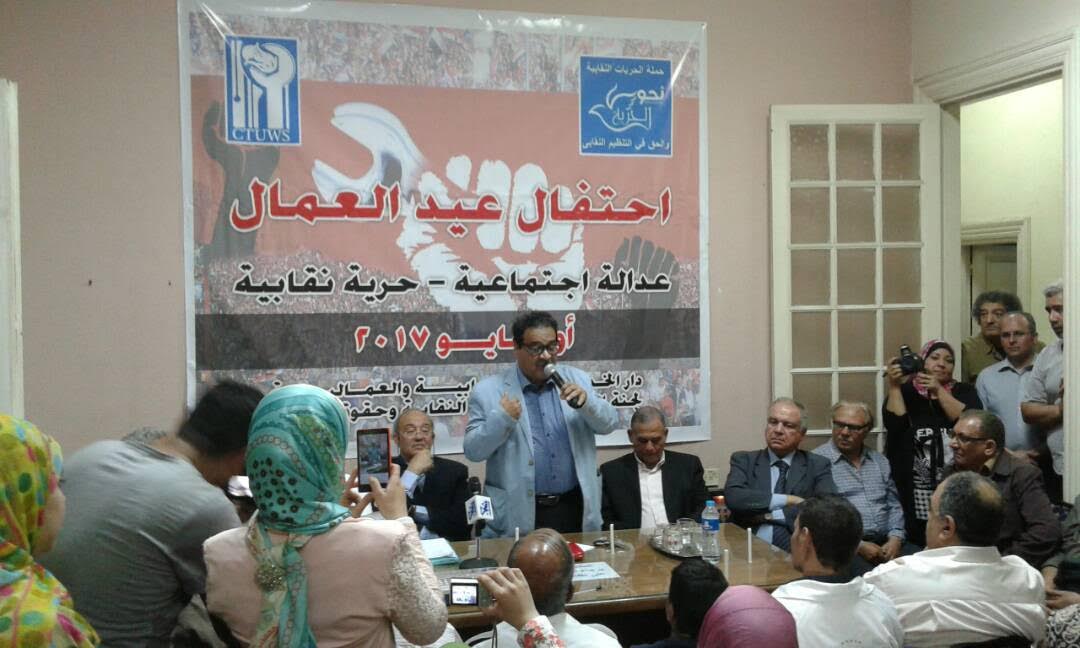 Since July 2013, there have not been any Labor Day rallies, marches or public protests in Egypt.

AD
You Might Have Missed
Where do old lesbians go to die?
Carbon Colonies & A Green New Deal
Mugamma revisited: Reimagining the building and the square
What we talk about when we talk about trees
AD
Jano Charbel
78 articles on Mada