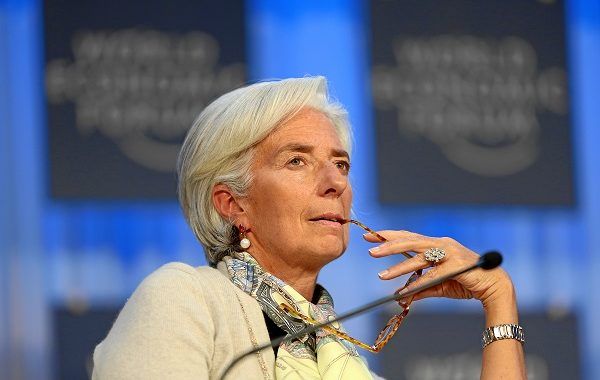 The weeks leading up to the International Monetary Fund’s visit to Cairo, which begins today, have seen the international lender signal that the Egyptian government needs to maintain or raise already high interest rates as a means to curb inflation.

The IMF’s signal isn’t without ramifications, as the dispersal of the second tranche of the US$12-billion, three-year deal to which the Egyptian government has hitched its political and economic future is at stake, along with an already difficult context for the majority of those living in the country.

However, analysts who spoke to Mada Masr found the raison d’être of the IMF’s claim contentious, criticizing the ability of interest rates to curb the country’s specific inflationary pressures and pointing to the IMF’s proposed measures as a possible driver of inflation. But it is not singularly an issue of the efficacy of the IMF’s proposed policies. Analysts say that, in fact, rather than target inflation, advocacy for high interest rates is a veil for other motives: attracting and compensating international creditors.

An emerging rhetoric of social responsibility

In the lead-up to, and perhaps serving as a prerequisite for the November 2016 deal with the IMF, Egypt embarked on a structural reform program under the self-described aim of reining in its ballooning budget deficit and restoring investor confidence in a country that had seen the erosion of its foreign currency reserve holdings since the January 2011 revolution. On the same day as the currency exchange rate was liberalized, the government marshaled a series of contractionary fiscal policies — reduced subsidies and raised taxes — while also tightening its monetary policy by hiking the interest rate by 3 percent to bring it to 14.75 percent for deposits and 15.75 percent for lending. The subsequent months saw annual inflation reach historic levels, peaking at 32.5 percent in March.

The IMF has adopted a particularly conciliatory tone toward social plight since its admitted miscalculation in Greece. In Egypt, the fund’s language has been bent to attend to the economic and social dangers of current inflation levels.

“Egypt is implementing a strong economic reform program to help the economy return to its full potential, achieve more growth and create more jobs. We recognize the sacrifices made and the difficulties faced by many Egyptian citizens, especially due to high inflation,” IMF Managing Director Christine Lagarde said in an emailed statement earlier this month. “The IMF is working to help the government and the Central Bank bring inflation under control and supports the steps the Egyptian authorities are taking to protect its poorest and most vulnerable citizens.”

Last week, as the date approached on which the fund would conduct its first review of the reform measures and determine whether it would disburse the second tranche of the loan, Lagarde said, “There is clearly a question that needs to be addressed, I would say, head‑on, and that is inflation. The other reforms have to continue, but there has to be a special focus on inflation. I think that the Central Bank and the finance minister of Egypt are both aware and will, I hope, tackle the inflation risk which is weighing on the population … It is critically important that the Egyptian authorities and the Egyptian people actually endorse the proposals there in order to take the economy forward.”

When asked about Egypt during a press conference the day after Lagarde’s statement, Jihad Azour, the director of the IMF’s Middle East and central Asia department, said that, “the level of inflation months and months is above 30 percent. This is not only hurting the overall financial stability, it’s also hurting social need, those who have low income, and the poor sector of the population.”

“In this case, the instruments that are the best to be used are monetary instruments, especially the interest rates,” he added.

While there is general agreement on the economic and social dangers of Egypt’s current inflation levels, analysts say the IMF’s push for high interest rates may miss the mark.

“Often, interest rates hikes are used as a tool to curb demand-driven inflation and not supply-driven inflation,” says Omar al-Shenety, managing director at the Cairo and Dubai-based investment bank Multiples Group, asserting that the interest rate as a monetary instrument is less effective in curbing inflation from supply shocks. He says one need only take the recent example of the Central Bank of Egypt’s move to raise the rate by 3 percent in November, which did not prevent the subsequent surge in annual inflation rates.

“It is all resulting from supply shocks rather than demand-driven kind of inflation,” Finance Minister Amr al-Garhy told Bloomberg TV in Dubai as inflation began to approach the 30-percent threshold in the months after the November measures.

“Demand driven inflation occurs when there is abundance of money with people who seek a limited number of products. In this case, interest rates are used to encourage people to save their money to lower demand in the market and ultimately ease price increases,” says Radwa al-Swaify, the head of research at Pharos Holding.

But in Swaify’s estimation, this is not the source of Egypt’s current inflationary trouble. “Inflation is currently caused by elevated production costs, which the companies pass on to consumers. Hence, raising interest rates would not be effective in curbing inflation because demand is not higher than supply in the first place,” she says. “[The recent acceleration in] inflation is caused by the simultaneous implementation of several measures with inflationary repercussions that intensified its impact.”

“All the sources of inflation have nothing to do with liquidity in people’s hands,” says economic researcher Mohamed Sultan, who points to a confluence of economic measures as the more veritable culprit: a surge in the cost of production due to currency devaluation, a rise in energy prices following subsidy cuts, a recently implemented value-added tax and a hike in customs.

Sultan’s claim is substantiated by a recent survey conducted by the Cairo-based Egyptian Center for Economic Studies (ECES), which found that business activity in Egypt has struggled in the aftermath of the liberalization of the pound, and that the industrial sector has been hit the hardest as it grapples with rising fuel prices. In effect, this means industry has posted the most marginal increase in employment levels and new investment, amid falling consumption levels.

“For a population where most people struggle to make ends meet, it is certain nobody would be choosing between spending their food allowance on their lunch or saving it instead,” says Sultan.

But if high interest rates do not address their purported aim, why has the IMF placed an emphasis on the monetary instrument as a means to mitigate inflation?

In its budget statement for the next fiscal year due to start in July, the government has expressed that it is wary of having to maintain high borrowing costs in order to attract international creditors, especially considering forecasts that there could be a change in some of the factors that shape international bond markets. “The possible rise in US interest rates would make it more attractive to foreign investments from all over the world, which lowers Egypt’s chances of getting credit at reasonable borrowing costs,” the statement asserted.

“The Egyptian government does not have a project that would entail any real change in the economy, which undermines its creditworthiness. This leaves the economy unchanged at best … The need to secure new debt grows and raising interest rates becomes the only way for the government to attract creditors,” says Sultan.

In order to maintain its high borrowing costs incurred, the government ultimately seeks to service national debt by cutting subsidies to pay off creditors, he adds.

There are no imminent signs that the IMF could withhold the second disbursement of the loan completely.

The London-based economic research company Capital Economics published a research note earlier this month, stating that it expects Egypt to pass the first review and receive the $1.25 billion second tranche.

The IMF visit notably comes a month later than originally planned, because of the Egyptian government’s commitment to prepare a new budget, according to comments made to the privately owned Al-Shorouk newspaper by Head of the IMF Commission to Egypt Chris Jarvis last February, the delay means that the potential disbursal of the second installment will be put off until at least the end of June, as opposed to the preset date in May, thereby allowing the commission the needed six to eight weeks to prepare its report.

The Central Bank of Egypt’s monetary policy committee is scheduled to convene on May 18 to make a decision regarding interest rates.

Capital Economics expects there to be tension between the government and the IMF if the government pushes back against harsher austerity measures, even if, in the estimation of Shenety, such measures would lead to the continuation of the current state of stagflation.

“This is how austerity policy keeps feeding itself. In this process, subsidies keep shrinking to compensate for rising debt service,” says Sultan. “Raising interest rates is the essence of the social injustice hidden within Egypt’s monetary policy.”

AD
You Might Have Missed
Where do old lesbians go to die?
Carbon Colonies & A Green New Deal
Mugamma revisited: Reimagining the building and the square
If they steal Sheikh Jarrah
AD
Waad Ahmed
28 articles on Mada