Maii Waleed, Ahmed Saleh and Marawan Waheed on the funk and life of Mohamed Helal
Behind the scenes at Found in Translation, our new collaboration with Cairo Jazz Club

Music interweaves permanently into various aspect of our lives: A voice with too much soul to be forgotten, a melody that refuses to die, lyrics that are recycled by different generations and cultures. For musicians, records, lo-fi tapes, film scores or smart-phone recordings can become vessels of this sonic immortality.

Mohamed Helal, an influential but under-appreciated Egyptian composer and producer who passed away last September, left a legacy behind in two forms: with countless songs, film scores and advertising jingles, and with other musicians’ careers, which he helped to launch, such as that of superstar Amr Diab. “The music of Mohamed Helal, or as most people called him, ‘Hek,’ is much better known than he is,” says journalist and scriptwriter Adam Yassin, who wrote a popular Arabic-language article in tribute to Helal for Mada Masr. “With Hek, no one even knew what he looked like. The image I use [in the article] is one of the only ones out there, except for some band shots in which he’s kind of concealed. What’s left of him is his music.” 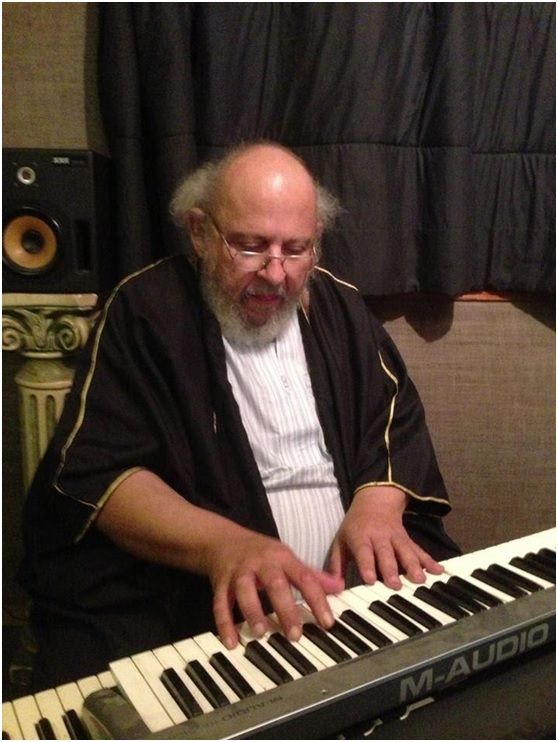 Now this music is getting an unusual re-incarnation. For the first in a new event series, called “Found in Translation”, produced by Mada Masr and Cairo Jazz Club, we gave CJC Yassin’s article and they in turn gave it to musicians 29-year old Maii Waleed (guitar, vocals), 32 year old Ahmed Saleh (keys, machines) and 27-year old, Marawan Waheed (drums) to create a set of original tracks responding to Helal’s work and life story. We locked them in a sounded-padded room at VIBE studio in Dokki, where artists from across the alternative music spectrum often record and rehearse. They had never worked collectively together before – Waleed is the link, having worked with Saleh in Telepoetics and with Waheed to found Ritza. But they came armed with a collective spirit, their instruments, notepads and Yassin’s article – titled “Decrescendo Mohamed Helal, the legacy of a musician and his music” – and spent several days rotating between recording rooms to create a new set of songs they will perform live tonight at CJC.

Yassin only just found out that his text had inspired a set of music that will pay tribute, in collaboration with Cairo Jazz Club, to Helal’s life, struggle, and art. “It’s exciting because his music needs to be reintroduced. If there are multiple interpretations, it will allow Hek’s music to live longer,” he tells me. “If Maii is going to do something based on his music, that shows wonderful continuity. Even if the music doesn’t exactly reflect his. It’s like when Franz Liszt performs Bach – he doesn’t play it exactly, but creates variations around the theme, he gets inspired and puts his own soul into it. But to be fair, Hek wasn’t a music virtuoso – of course Bach’s music lives on longer than Hek’s brand of what we call in Egypt ‘aghany khafifa’ [light songs]. At the same time, I don’t think anyone living in Egypt at the time will forget the melodies of his pop culture work, be it the jingle for mosquito repellent Raid or the theme song for [prank TV shows] Hidden Camera. They’re tied to us.”

Ironically, when I attended the newly-formed band’s rehearsal at VIBE, a mosquito bit me within the first few minutes. It was an appropriate introduction to what I would hear though: a song the band refers to as Al Namoose (The Mosquito), in which Waleed sings these self-penned lyrics:

And I’m fed up

This frenetic song pays homage to Helal’s TV commercial, one that the band attests to growing up with and knowing innately, despite only finding out now who produced it. Its structure could be a metaphor for Hek’s notorious drug addiction and subsequent downward spiral, as depicted in Yassin’s article.

Waleed says she was eager to take on CJC’s assignment as it meant working through a challenging creative process, but also because of her subconscious attachment to Hek’s music. Much of Hek’s work was laced with funk, drum machines and uppity claps – as Waleed and her collaborators tell me at VIBE, Hek’s music rarely reflected the sadness, suffering and addiction that ultimately ended his life.

“If you listen to Hek’s music, you would never know the person who made it was suffering so badly due to all the funk textures and rhythms,” says Ahmed Saleh (Telepoetics, Ahmed Saleh+Abduallah Miniawy). “That said, we’re not going overboard on the funk because we do want to acknowledge his pain. We found different ways to discuss this – for example, the songs are not very melodically focused, but the rhythm is quite down, and dark. The sad mood of the songs, and the story itself, is communicated largely through the rhythm. Melodically is where you find some of the high times, but the rhythm communicates the darkness.”

They seem to be doing very well, considering the time constraints and the specificity of the task at hand. “We didn’t plan it so much, it’s more of an improvisational jam,” says drummer Marawan Waheed (The Cadillac’s, Nour Project, Shady Ahmed Band) when asked about their process. “Sometimes I’ll lay down a beat on the drums, other times it will come from Ahmed on the bass and I’ll follow. Or a riff on the guitar. It’s a very organic process.”

I joined the band again the next day, midway through a studio session. Saleh largely arranged the song the band refers to as Tallah Sawty (My Voice Is Out), and it is here we get a sweet dose of his trip-hop textures and Waheed’s breakbeat sensibility.

Shams (Sun), the beginning of which I had heard the previous day, was transforming into something much fuller and more rhythmic. Originally fueled by Waleed’s vocal line and a guitar riff, it was being augmented by Saleh’s groovy baseline, and Waheed was bringing it all together with the smooth combination of hi hats and claps found in the Roland drum machine he adjoins to his kit.

In the lyrics for Shams, Maii poetically reflects the cruel isolation of a life riddled with addiction and mental illness. The juxtaposition of upbeat music and melancholic lyrics quite accurately express the dichotomy of Hek’s life and work.

The sun is far the farthest from me

The sun is lonely, just as lonely as me

But if it gets a little closer it’ll burn me

Waleed mentions the band’s ambitious plan to build their set in a way that mirrors the “decrescendo” that is the theme of Yassin’s article. “Since we mostly used Hek’s life itself as a source of inspiration, we wanted to figure out how to play off the title of the article and the idea of a ‘decrescendo’,” she explains. “It’s symbolic of his life. So we were thinking of constructing the set to reflect this: The first tracks are a bit upbeat, and then we’ll break it down to follow a downward slope.” The few songs I heard were quite full, highly rhythmic and cleverly dichotomous – they might even make you groove on the dance floor.

Walking out to a melody of car horns on Dokki’s Mossadak Street, I wondered if Helal could in any way receive the message that his work is continuing to inspire articles, music and lyrics after his death – that even as his story reaches its quietest point, it now climbs loudly upward as his life continues to translate into art.

AD
You Might Have Missed
Mugamma revisited: Reimagining the building and the square
What we talk about when we talk about trees
Carbon Colonies & A Green New Deal
Where do old lesbians go to die?
AD
Maha ElNabawi
89 articles on Mada

Topics
Related
music
Music industry conversations: Hicham Chadly
Maha ElNabawi | There has never been so much good music out there, but no one knows how to find and apprehend it
2016 year enders
11 music releases from 2016: Space is a desert
Maha ElNabawi's moving & reinvigorating selection of this year's best releases from Egypt and beyond.
Alexandria
Band of the week: Telepoetic
Maha ElNabawi | A few days back, on January 25, on the way home from the office I got stuck in what felt like an eternal Sisi Day
Mada Mix
Band of the week: Maii Waleed
Maha ElNabawi | It’s been six months since singer songwriter Maii Waleed dropped her debut EP, “Moga.”