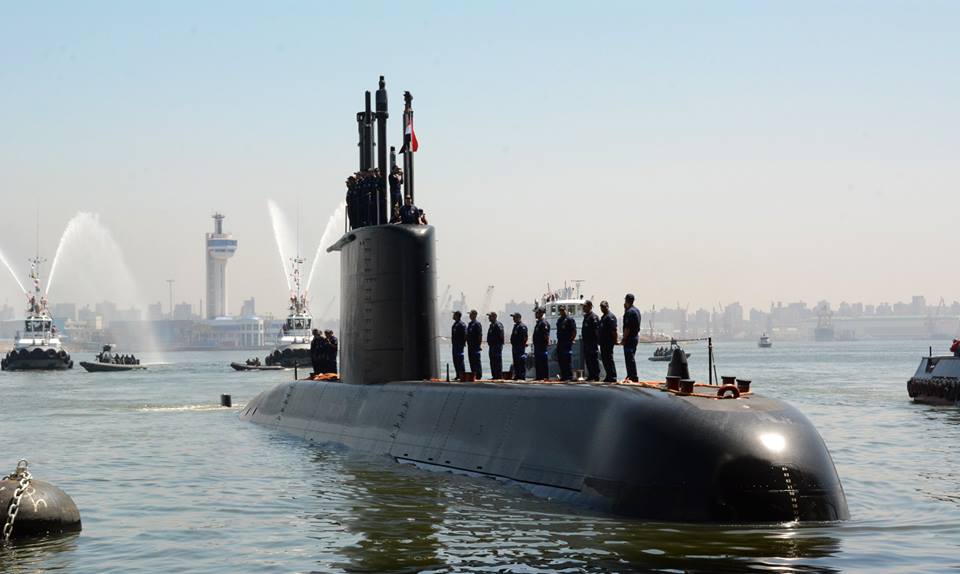 Egypt received the second of four German military submarines on Wednesday, amid fanfare from the Armed Forces. Arriving in Alexandria, the U-209 submarine is part of the country’s recent military spending which has seen the purchase of helicopter carriers, warships, submarines and other military vehicles worth billions of US dollars.

Egypt’s state-owned press and mainstream media outlets welcomed the delivery of the submarine with patriotic sentiments, but failed to mention the price tag. German media outlets previously reported that the price of two U-209 submarines and their accompanying missile defense systems cost Egypt 920 million euros.

The first submarine arrived in December 2015, as part of a contract for two submarines signed in 2011. German and Egyptian military sources affirmed that Egypt subsequently purchased two more submarines in 2014, presumably at the same price.

The submarines were constructed by the privately owned Howaldtswerke-Deutsche Werft, based in the northern German port city of Kiel.

The state-owned EgyNews site reported that the vessels have been equipped with weapons systems using both torpedoes and missiles, as well as “the latest navigation and communication systems, which can ensure the safety and security of the country’s coasts and regional and national waters,” calling them great technological additions to the Naval forces’ potential.

It takes approximately 57 months to build and equip each submarine, measuring 73 meters in length, according to EgyNews. They are diesel powered and reportedly capable of traveling up to 11,000 nautical miles from shore, at a speed of 21 knots.

In January of this year Egypt moved to expand its navy with the formation of the Southern Fleet Command, inaugurated by President Abdel Fattah al-Sisi at the Red Sea port of Safaga. The fleet aims to secure Egypt’s ‎eastern coastline and ensure the safe navigation of maritime traffic through the Strait of Bab al-‎Mandeb and the Suez Canal.

Egypt’s naval and air forces have been playing supporting roles in the Saudi-led coalition’s war against Houthi rebel forces and their allies in Yemen since March 2015.

In January Sisi and the National Defense Council also agreed to extend Egypt’s military operations in Yemen for an unspecified period of time. The president argued that Egypt became involved in the conflict for the sake of both regional and national security.

According to Global Firepower, Egypt currently has the sixth strongest navy in the world.

Independent political analyst Nael Shama told Mada Masr that Sisi is aiming to convey that military strength is required in the present and future for Egypt’s interests, adding that during his tenure “there has been a great deal of emphasis placed on increasing Egypt’s military might, despite the economic problems that Egypt is going through.”

According to Shama: “Egypt’s foreign influence has been very limited, particularly in terms of its foreign financial influence, but it is now striving to exert its military influence abroad.” He added that the government may be expanding its naval might as Egypt has traditionally held sway over the Bab al-Mandeb Strait, and “has long considered the Red Sea to be its backyard, of sorts.”

Topics
Related
arms deals
US report: Egypt topped developing countries in arms imports in 2015
Egypt imported US$5.3 billion worth of arms in 2015, more than any other developing country, according
military economy
Sisi: Official military expenditure lowest in region, additional expenditure from private military funds
In an interview with state-owned newspapers Sisi said that Egypt’s military expenditure is the lowest
arms deals
Egypt procures new submarines from Germany as military spending spree continues
Egypt has received the first of four German military submarines commissioned for the Navy, the first
arms deals
Pursuing alternatives to American weapons
Pesha Magid | Egypt purchased two French warships at the end of September and rumors of new arms deals have since been