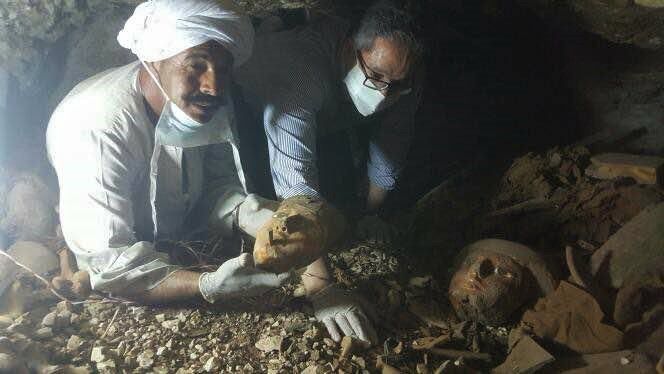 A team of Egyptian archaeologists unearthed a tomb in Luxor, dating back over 3,300 years, on Tuesday. The Antiquities Ministry announced that among the artifacts discovered were several mummies, and over 1,000 miniature Ushbati funerary statues.

This tomb was excavated in the Qurna archaeological site, located on the West Bank of Luxor, and has been identified as belonging to a judge named Userhat. In addition to the statues and mummies, sarcophagi, funerary masks and pottery were discovered, believed to be from the 18th Dynasty (circa 1550 – 1298 BC) of ancient Egypt’s New Kingdom.

According to televised statements issued by Antiquities Minister Khaled al-Anany, the tomb includes a courtyard, two inner chambers and a seven-meter-deep well. He added that it is likely to have been reused during the 21st Dynasty (reigned Circa 1077 – 943 BC).

The minister told the state-owned Al-Ahram newspaper that despite the tombs relatively small size, it contained six wooden sarcophagi with their mummies “in good condition.” He affirmed that several funerary masks, many of which still retained their vivid colors, were also found along with an estimated 1,050 Ushabti statues, funerary figurines meant to serve the deceased in the afterlife.

According to Anany, the archeologists who excavated Userhat’s tomb reported that those buried there “had died after suffering from some kind of disease.” He said they are now conducting investigations to determine what this may have been, in addition to further excavations as there may be other tombs in the vicinity.

Osama Rashad, a tour guide and analyst of ancient Egyptian history, told Mada Masr that he expects excavating, repairing and restoring the contents of the tomb to be a lengthy and time-consuming process.

“There is a significant amount of archaeological information still to discerned from this tomb,” he said posing that this may entail technological sensory scans and DNA tests, if need be. That the tomb was potentially re-used during the 21st Dynasty may make understanding the history of the artifacts difficult.

According to Rashad, “some nobles and their families would reuse old tombs. This has caused a significant amount of confusion and uncertainty among the ranks of archaeologists.” Old tombs were most often during times of foreign invasion and hardship, when fewer resources available.

He claimed that the tomb of a nobleman like Userhat would likely have been reused during the time of the Third Intermediate Period (Circa 1070 – 664 BC), which saw instability, foreign occupation and economic decline, by individuals “typically not related to the original tomb owners.”

Rashad added that Userhat would most likely have been serving as judge in the area of Deir al-Medina, the residential quarters of artisans working on royal tombs in the Valley of the Kings. Rashad told Mada Masr that he would likely have been a literate, high-ranking nobleman.

Topics
Related
Egyptology
3,000-year-old tomb of royal scribe unearthed in Luxor
The 3,000-year-old tomb of a royal scribe was unearthed in Luxor by a team of Japanese and Egyptian archaeologists
cultural heritage
Keeping track of the artifacts: On the Egyptian Museum’s Registration, Collections Management and Documentation Department
Meredith Brand | A look at the Egyptian Museum’s remarkable Registration, Collections Management and Documentation Department.
archaeology
Introducing a series on Egyptology, archaeology and heritage management in Egypt
Meredith Brand | Neglect and mismanagement are accusations that permeate any discussion of Egypt’s cultural heritage.
Ancient Egypt
Swedish archaeologists unearth 3,400-year-old necropolis in Aswan
A team of Swedish-led archaeologists announced on Wednesday that they discovered a network of over 40