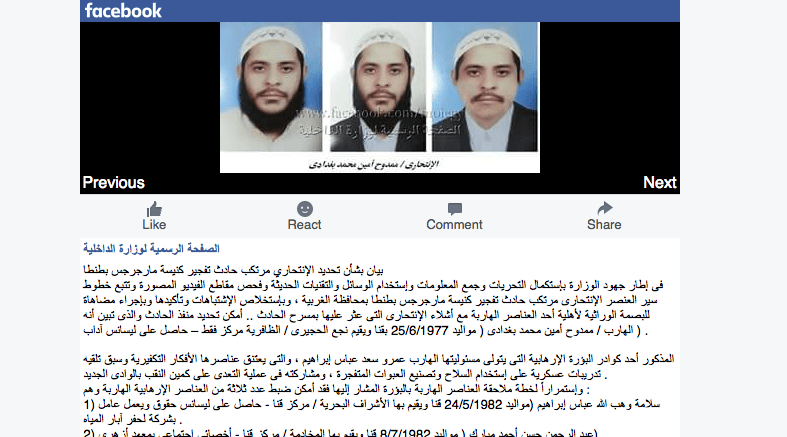 Egypt’s Interior Ministry announced it had identified the suicide bomber involved in the attack on St. George Coptic Orthodox Church in Tanta during Palm Sunday prayers, which resulted in the deaths of at least 28 people.

In a statement the Interior Ministry identified the bomber as 40-year-old Mamdouh Amin Baghdady, from Upper Egypt’s Qena. Baghdady was a fugitive who was allegedly involved in a previous attack on a security checkpoint in Wadi al-Gadeed, according to the statement.

Salama Wahballah Abass Ibrahim, Abdel Rahman Ahmed Mubarak and Ali Shahat Hussein Shehata were also identified by the ministry as Baghdady’s accomplices in the attack. The ministry announced a LE100-500 thousand reward for anyone who can locate their whereabouts.

On Wednesday, the Interior Ministry announced it had identified the suicide bomber behind the second Palm Sunday attack on St. Mark Coptic Orthodox Church in Alexandria, which left more than 17 people dead. The ministry named 31-year-old Mahmoud Hassan Mubarak Abdallah from Qena, who worked at a petroleum company, as the culprit.

The Province of Sinai militant group, affiliated with the Islamic State, claimed responsibility for both Palm Sunday bombings, identifying the perpetrators with their nom de guerre as Abu Baraa al-Masry in the Alexandria attack and Abu Ishaq al-Masry in the Tanta attack.

In the aftermath of the bombings, President Abdel Fattah al-Sisi announced his intention to affect a state of emergency for three months, pending constitutional procedures. Parliament approved the decision on Tuesday, as well as amendments to the emergency law that give security forces powers to arrest any suspect without prior approval from the public prosecutor, and to detain anyone perceived as a threat to public security for an indefinite period without investigation or formal charges.