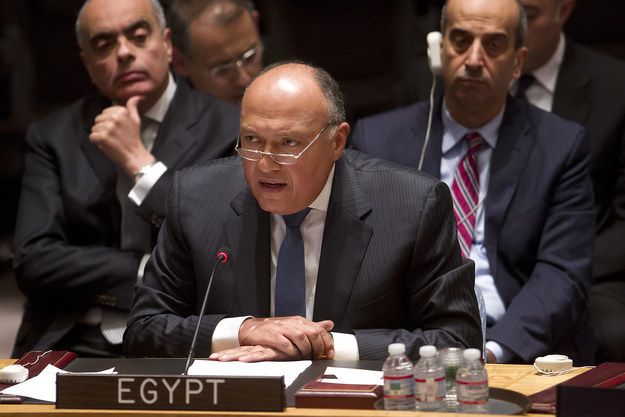 Egypt voted Wednesday in favor of a United Nations Security Council resolution presented by a number of countries, including the US, UK and France, to condemn a recent chemical weapons attack in Syria. The resolution obliges Syria to comply with recommendations from the Organisation for the Prohibition of Chemical Weapons (OPCW).

The attack, which took place in Khan Sheikhoun in Idlib province on April 4, claimed the lives of approximately 72 people, and was followed by a retaliatory US airstrike on a Syrian government air base in Homs.

Egypt’s ambassador to the UN, Amr Abul Atta, told the P3 countries that presented the resolution that Egypt was sorry it did not pass. Russia vetoed the decision,  a move it announced in an earlier session at the UN Security Council.

In his address during Wednesday’s session, Abul Atta said that “not intervening in the Syrian crisis for the sake of one side over the other is not a negative position,” calling for the US and Russia to coordinate on the ground and politically.

The P3 adopted the resolution before the Security Council’s previous session, which was held to discuss the attack. However the resolution was not presented after Russia threatened to veto it.

This resolution is the fourth draft of previous iterations that circulated among council members. The first draft was submitted by the P3, another by Syria and a third by the E-10 member states.

In a statement announcing its position on the first draft of the resolution on April 6, Egypt’s Foreign Ministry announced, “Egypt feels worry and discomfort regarding the state of polarization in the Security Council concerning the matter, in a way that restricts the Security Council’s ability to end the suffering of the Syrian people.”

“Egypt will continue to prioritize the interests of the Syrian people when dealing with draft resolutions concerning Syria in the Security Council. This is in line with the principles and positions towards the Syrian crisis since its outbreak,” ministry spokesperson Ahmed Abu Zeid said.

In February Egypt abstained from voting on a draft resolution in the Security Council in a bid to prevent the Syrian regime from accessing helicopters and to impose sanctions on officials and institutions for their involvements in the use of chemical weapons against civilians. This was also vetoed by Russia.

The draft resolution included the names of 11 Syrian officials and 10 institutions affiliated with the Syrian military, whose involvement in the use and production of chemical weapons has been proven. A joint investigation committee in 2015 established the involvement of the Syrian government in the use of Sarin, which is prohibited, against the Syrian people at last three times in Idlib province. The committee also found out that the Islamic State used Mustard gas against civilians in one incident in Aleppo in 2015.

Egypt’s has been heavily criticized for its foreign policy concerning Syria, especially in October, when Egypt voted in favor of two conflicting resolutions, one of which was a French resolution that was supported by the P3 countries, Turkey and Gulf states, but was vetoed by Russia.

Egypt was elected to the non-permanent UN Security Council seat in January 2016, where it will serve a two-year term to end in December 2017. It is the only Arab country currently in the Security Council.