The rapid approval came one day before Parliament approved the presidency’s declaration of a three-month state of emergency, which President Abdel Fattah al-Sisi first announced on Sunday night following the bombings.

Parliament also took the first step toward potentially approving the contested transfer of the Tiran and Sanafir Red Sea islands to Saudi Arabia on Monday. The legislative body had previously avoided engaging with the controversial issue since the land transfer agreement was signed in April of last year and sparked public outrage.

During the packed session, Parliament referred the agreement to its legislative and constitutional affairs committee, where it will undergo a preliminary vote, before a final vote takes place in the general assembly.

Parliament’s intervention comes amid a judicial divide over the matter. A January ruling issued by the Supreme Administrative Court (SAC) asserted Egyptian sovereignty over the islands. In April, the Cairo Court of Urgent Matters ruled against the SAC’s earlier decision, deeming it invalid.

Member of Parliament Salah Hasaballah, from the state-aligned Alliance to Support Egypt coalition, proposed the criminal procedure bill, which includes amendments to the Penal Code, the anti-terrorism law and Court of Cassation appeals procedures on Monday.

Parliament’s legislative and constitutional affairs committee approved the bill and prepared a report detailing its legal opinion within the same day. The draft law was subsequently approved in the general assembly and sent to the State Council for legal review.

The amendments included in the bill would allow courts to forgo witnesses and permit the Court of Cassation to review appeals itself, instead of assigning the case to another court.

Proposed changes to the anti-terrorism law would allow security forces and those with powers of arrest to detain suspects without charge for a 14-day period, which is renewable once. The law currently limits this to a non-renewable seven-day period.

The amendments were briefly discussed in the general assembly, during which time there were no objections.

Sisi previously asked Parliament to amend the Criminal Procedure Code in June 2013, following the assassination of Public Prosecutor Hesham Barakat, saying: “The hands of justice are shackled by the law.” Sisi repeated his request after the bombing of the St. Peter and St. Paul church, adjacent to Cairo’s main Coptic cathedral, last December, which killed at least 20 people.

Hasaballah claims that the amendments aim to “fill the cracks that terrorism leaks through.”

He says that he decided to propose the bill after the government delayed issuing the amendments, initially announced in January. Hasaballah clarifies that it is not intended to replace the comprehensive revision of criminal procedures that the government is still expected to present.

Announcing the approval of the criminal procedure bill on Monday, Parliamentary Affairs Minister Omar Arafa said: “The government is committed to presenting a complete Criminal Procedure Code within less than two weeks. However, Hasaballah’s proposition has been accepted as it includes urgent amendments that are needed at the present time.”

Also during Monday’s session, Parliament approved an amendment to the protest law requiring the Interior Ministry to seek judicial approval before canceling a protest. Article 10, allowing the ministry to cancel protests was annulled after being deemed unconstitutional by the Supreme Constitutional Court in December.

Rights lawyer Gamal Eid says the amendment is “a step in the right direction,” adding, however, that the law is full of other flaws. He adds that the amendment solidifies the legal principle giving the judiciary the final say. 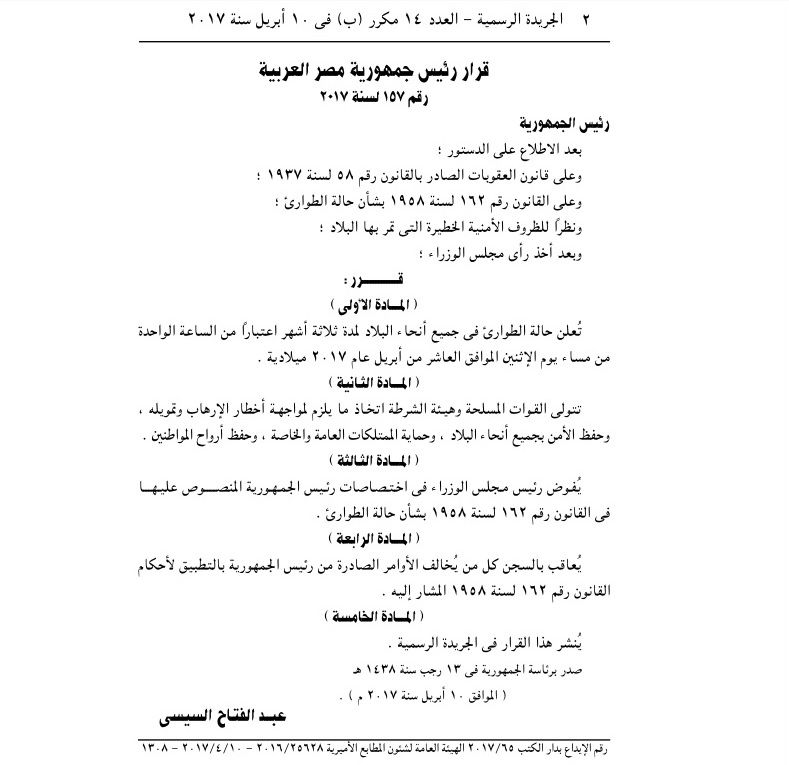 During the session, Parliamentary Speaker Ali Abdel Aal read the decree announcing the state of emergency, which was published in the official Gazette on Monday.

According to Ahmed Sharkawy, a member of Parliament’s legislative and constitutional affairs committee, the state of emergency had already been enacted prior to its approval by Parliament on Tuesday. He adds that its approval was merely a continuation of the procedures mandated by the Constitution and the law.

Topics
Related
emergency law
Parliament approves Emergency Law amendment, permitting indefinite detention
Parliament approves Emergency Law amendment to address void left by 2013 constitutional court ruling
emergency law
What Sisi can and can’t do under a state of emergency
What would a state of emergency mean under the current Constitution and emergency law?
Palm Sunday bombings
Palm Sunday bombings live
Live updates on the explosions that occurred on Palm Sunday in Tanta and Alexandria
Tiran and Sanafir Islands
Tiran and Sanafir: Who will write the final chapter?
Rana Mamdouh | Debate continues about who has jurisdiction to make decisions regarding sovereignty?