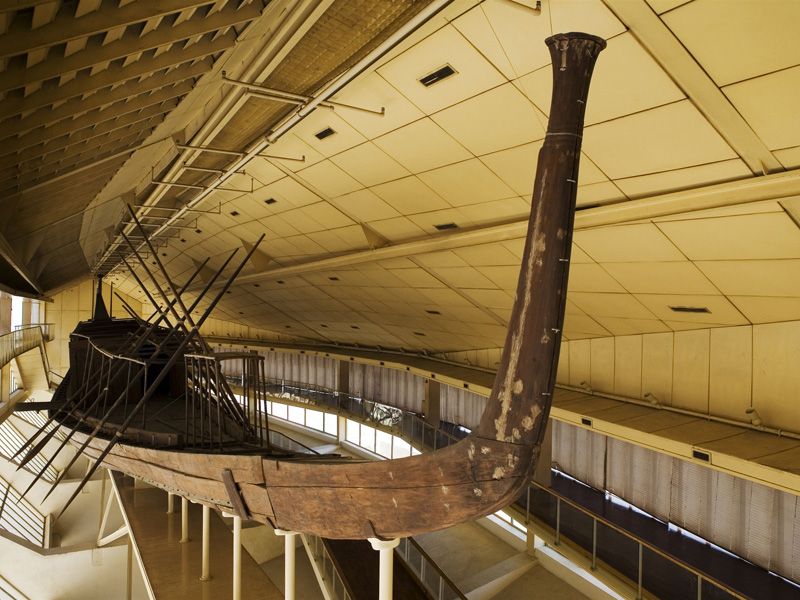 The largest wooden plank from a royal solar ship — measuring about 26 meters in length — was excavated near the Great Pyramid of Giza on Wednesday by a joint team of Egyptian and Japanese archaeologists. It is believed to be a part of a funerary barge for King Khufu constructed more than 4,500 years ago.

The archaeological discovery comes just one day after the inauguration of a new laboratory by the Great Pyramid for the restoration of ancient Egyptian artifacts, specifically Khufu’s second solar boat. The new lab is reportedly equipped with state-of-the-art technology for the restoration and preservation of the ancient wooden parts used in the construction of these royal funerary boats. It is funded by the Japanese International Cooperation Agency, along with Higashi Nippon International University, and is scheduled to complete the restoration of Khufu’s second solar ship by the year 2020.

After being reassembled and restored, the second solar ship will reportedly be displayed at the New Grand Egyptian Museum (due to be completed by 2018) by the Giza plateau.

The state-owned Middle East News Agency (MENA) reported on Wednesday that this large plank was part of a solar ship, which had been buried in the earth just a few meters away from the Pyramid of Khufu (also known as King Cheops) who reigned Circa 2589 BC – 2566 BC. MENA added that the plank discovered on Wednesday is a part of the ninth layer of the royal funerary vessel, known as the Shayal – a layer which measures around 50 meters in length. According to Reuters, the plank was said to have been unearthed by King Khufu’s pyramid, in a pit at the depth of three meters.

Mamdouh Taha, a leading official from the Ministry of State for Antiquities, who presides over the restoration of Khufu’s solar ships, explained that archaeologists have unearthed 727 pieces of wood from the ancient king’s second solar ship. It is believed that the wood for the construction of these ancient royal solar ships was imported cedar wood from what is present-day Lebanon.

Khufu’s first solar ship was rediscovered buried in the earth by the Great Pyramid in 1954. The 1,224 pieces of this first funerary ship were reassembled, and this ancient wooden ship has since been placed on display at the Giza Solar Boat Museum, nearby. The ancient king’s second solar ship was discovered in the 1980s.

Both of Khufu’s solar ships are believed to be seaworthy, although the actual purpose of these buried funerary ships may have been symbolic — carrying the spirit of the resurrected king towards the sun god Ra, across the celestial firmament. Or perhaps these solar ships had the more practical purpose of transporting Khufu’s mummified remains to Giza for burial in his Great Pyramid.

Khufu’s son, King Khafra (aka Chephren) — for whom the second largest pyramid on the Giza plateau was constructed — also had a solar boat buried by his funerary edifice.

A host of ancient Egyptian kings and nobles (from the Old and Middle Kingdoms) had complete solar ships, or funerary barges, buried next to their tombs or pyramids – the oldest of which dates back more than 5,000 years.

In February 2016, a team of Czech archaeologists discovered the wooden remains of a large ancient ship in the Abusir necropolis near the town of Badrasheen dating back over 4,600 years, around 100 years prior to the construction of Khufu’s Great Pyramid in Giza. Measuring 53 by 24 meters, the solar ship has been associated with an unknown nobleman rather than a king. The Czech Institute of Egyptology has suggested that this nobleman’s tomb and his solar boat may be linked to the era of King Huni, who reigned circa 2,625-2,600 BC.

Topics
Related
Egyptology
New research reveals funerary ‘pot burial’ in ancient Egypt wasn’t just for the poor, as widely thought
While mummification and burial in coffins is the form of burial most closely associated with the upper
archaeology
Introducing a series on Egyptology, archaeology and heritage management in Egypt
Meredith Brand | Neglect and mismanagement are accusations that permeate any discussion of Egypt’s cultural heritage.
Ancient Egypt
Hatshepsut, Cleopatra and the women who ruled Egypt
Jano Charbel | While the image of the Ancient Egyptian matriarchal ruler is often condensed in the persona of Cleopatra,