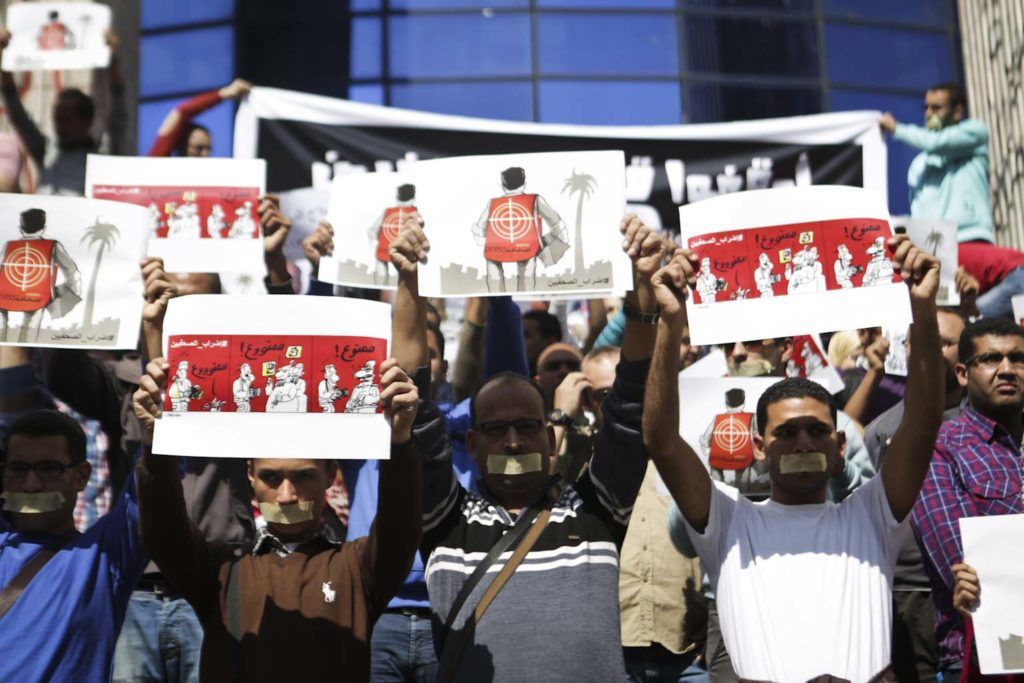 Ahead of President Abdel Fattah al-Sisi’s meeting with Donald Trump on Monday, the Committee to Protect Journalists (CPJ) issued a statement condemning the continuous detention of 25 journalists in Egypt’s prisons and detention centers.

According to a statement issued by the White House’s Press Secretary earlier this week, Trump and Sisi are expected to “discuss a range of bilateral and regional issues, including how to defeat the Islamic State and pursue peace and stability in the region.”

In what sounded like a response, the CPJ stated, “terrorism is the pretext that Egypt’s government has used to jail most of the journalists,” under the headline, “As Egypt-US relationship moves forward, jailed Egyptian journalists left behind,” noting that journalists are continuing to be jailed for their alleged affiliation with the now-outlawed Muslim Brotherhood.

In December 2016, the CPJ listed Egypt as being the world’s third worst offender of journalists, trailing closely behind Turkey, which jailed 81 journalists in the same year, and China, with 38 journalists behind bars.

According to a press freedom index compiled by the Paris-based Reporters Without Borders (RSF) last year, Egypt ranked 159 out of 180 countries. The RSF also labeled Sisi a “press freedom predator,” listing him among 35 presidents, political and religious leaders, militias and criminal organizations that censor, imprison, torture and murder journalists around the world.

Among the imprisoned journalists listed by the CPJ in its most recent statement are Mahmoud Abdel Nabi, Abdallah al-Fakharany and Hesham Gaafar, head of the Mada Foundation of Media Development, who is facing accusations of belonging to the Muslim Brotherhood and receiving illegal funding from abroad.

Abdel Rahman Yakout, a photojournalist who was released earlier this month, told CPJ that he has to periodically check in at his local police station in line with the terms of his release.

“I am technically still in prison … I can’t adapt,” he told the CPJ.

Yakout, who was a photojournalist for local website Karmouz, spent two years in jail after he was charged with possessing explosives when he entered a police station in Alexandria in March, 2015. He told the CPJ that he can no longer work as a photojournalist because he fears re-arrest.

In its statement, the CPJ also pointed to the US’ annual US$1.3 billion grant in military aid to Egypt, “despite these clear violations of Egyptians’ human rights.”