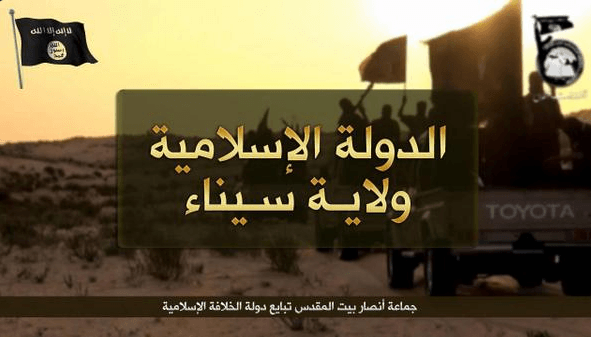 Islamic State-affiliate Province of Sinai released a promotional video on Tuesday showing members of the organization carrying out what it alleges to be Hisba, or religious policing. The group claimed the footage is from locations in North Sinai, which it did not identify.

Hisba is defined by religious scholars as the practice of commanding virtue and forbidding vice, professor of Islamic law professor at Al-Azhar University Ahmed Kareema told the state-owned Al-Ahram newspaper. He added that Hisba should be conducted by a select few who must be efficient, fair, knowledgeable and capable, describing it as a type of guardianship falling to those who have been entrusted with religious matters.

In the 25-minute video, titled Nur al-Sharia (The Light of Islamic Law), Province of Sinai members were shown stopping trucks carrying cigarettes, emptying their cargo and setting it alight. Another scene shows militants setting fire to a truck loaded with cigarettes, but empty of passengers. The footage also shows small television sets being smashed and set afire, and the destruction of gravestones, which some branches of Salafism consider to be religiously prohibited.

In the video a militant identified as Abu Meqdad al-Masry says: “Among the evils confronted by the men of Province of Sinai’s Hisba are the evils of smoking and narcotics.” He adds “some people who smuggle large quantities of tobacco were prevented from doing so by Hisba men, who advised and then punished them, after which they prohibited the sale of tobacco or its promotion.”

Another member of the group, identified as Abu Musaab al-Masry, claimed that Hisba is “the first priority of Province of Sinai,” adding that “we have referred anyone who sinned to the Sharia court which will either issue them death sentences, or rule to bring them to repentance.”

The militant also said that the group is fighting Sufism, which he describes as a form of polytheism and heterodoxy, accompanied by footage of a masked man lecturing a Sufi congregation, which he alleges is repenting.

The video closed with footage showing the beheading of two Sufi sheikhs, identified as Suleiman Abu Harraz and Qutaifan Mansour, who were charged by the Province of Sinai’s Sharia court with “priesthood.”

Egypt’s Military Spokesman issued a statement on Sunday saying that the military division stationed in Sinai, the Second Army, foiled an attempt by militants to set up a checkpoint in Arish, North Sinai’s capital. The statement claims that eight “Takfiris,” referring to hardline Sunni groups, were killed in the clashes.

Several media outlets also reported that “Takfiri elements” set up checkpoints for the purpose of filming propaganda about the security situation in Sinai.

Province of Sinai released photos earlier in March showing what is reported to be checkpoints set up in downtown Arish. Eyewitnesses relayed to Mada Masr that militants were stopping cars and requesting identification, telling citizens that they were looking for Christians.

In February members of the militant group are also reported to have twice intercepted a bus transporting teachers from Arish to schools in nearby Rafah, on the Gaza border. The teachers were threatened with punishment by “whipping and acid” if they did not comply with what the militants called an “Islamic dress code,” and if they continued to travel unaccompanied by a male relative.

The group has been accused of carrying out recent targeted attacks against Coptic Christians in North Sinai after seven were killed by militants in February, prompting hundreds of Copts to flee Arish. Province of Sinai was implicated in the attacks after releasing a video announcing it is targeting of Copts, and claiming responsibility for the deadly bombing of the St. Peter and St. Paul Church in Cairo last December.

The group also killed Armed Forces Lieutenant-Colonel Ramy Hassanein, commander of a commando division, using an explosive device which targeted his convoy as it passed through Sheikh Zuwayed in October.

Militant activity in North Sinai is mainly centered in the north east corner, in the cities of Sheikh Zuwayed and Rafah however the conflict between militant groups and the Armed Forces has increasingly been felt in the city of Arish.

Topics
Related
Province of Sinai
Province of Sinai claims responsibility for assassination of high-ranking security official
The Province of Sinai has claimed responsibility for the bombing of a military convoy in Arish in North
Province of Sinai
No safe routes to schools: Sinai teachers intercepted by Islamic State loyalists
Teachers say they will not go back to work until safe routes to schools are provided
attacks on Copts
North Sinai Copts face death or displacement in absence of security and tribal protection
Heba Afify | The circle of Coptic Christians in danger of targeted attacks widens in the absence of protection
Arish
War in Sinai echoes strongly in Arish
Heba Afify | Since North Sinai became a battleground for the fight between militant groups and the military three