During this year’s Cairo International Book Fair, which opened January 26, one day saw publishers leave their booths and descend upon the second-hand booksellers, who located in a section of the fair representing Souq al-Azbakiya, named after a street in downtown Cairo famous for selling books.

Angry and frustrated, the publishers quarreled with the Azbakiya sellers, accusing them of stealing their publications and illegally reprinting them. The quarrel soon developed into a fist fight.

Book publishers in Egypt have been fighting piracy for the past few years. However, their struggle raises bigger questions about the economic challenges which are currently facing the industry and spurring copyright breaches.

“Those who print locally published Arabic books here, in Azbakiya, to which authors have copyrights, deserve whatever happens to them,” says Hossam al-Saeed, who owns a bookstore in the Azbakiya market for second-hand books.

But he has a different view on English-language books.

Saeed believes that English books should not be copyright protected here, as their exaggerated prices prevent students from accessing them. He added that these price tags increased significantly after the Egyptian pound lost half its value following November’s currency devaluation. 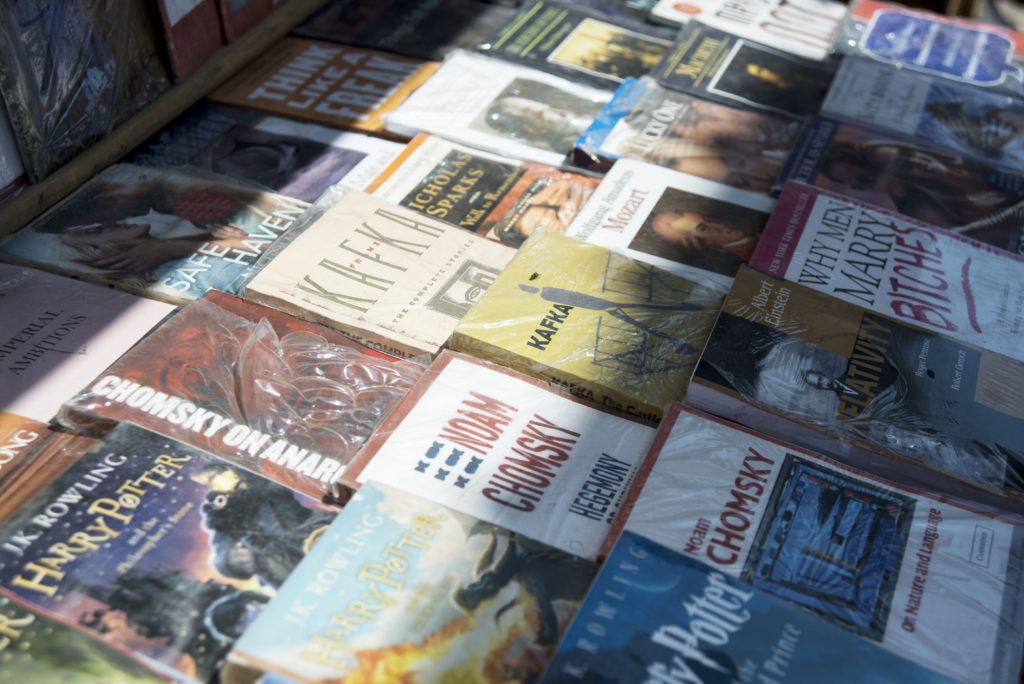 The reprinting of Arabic books used to be widespread, but past years have increasingly seen authorities confiscate pirated Arabic-language stock, while turning a blind eye to English reprints, Saeed says. He adds that the authorities normally show up when publishers issue a complaint.

Saeed further elaborates, telling Mada Masr that Azbakiya bookstores are merely the end sellers, and that these books are reprinted in printing presses in Helwan, in Cairo, and Dar al-Salam in Alexandria. Some are registered print houses that are used by formal publishers who then keep scans of the prints to be used for informal copies.

The difference is apparent in the pricing.

While Azbakiya bookstores display English language fiction priced between LE20 and LE30, officially imported copies of the same books can be found in the larger bookstores for more than LE100.

Sherif Abdel Fattah, whose brother owns an Azbakiya bookstore, and his assistant, confirm that all the new publications sold in Azbakiya are copies obtained from distributors who order the books from the printing presses.

Khaled al-Masry, another Azbakiya bookseller, says that during this year’s book fair, sellers were unable to sell copies of Arabic books they had printed due to a crackdown by the authorities, however English reprints were unaffected. 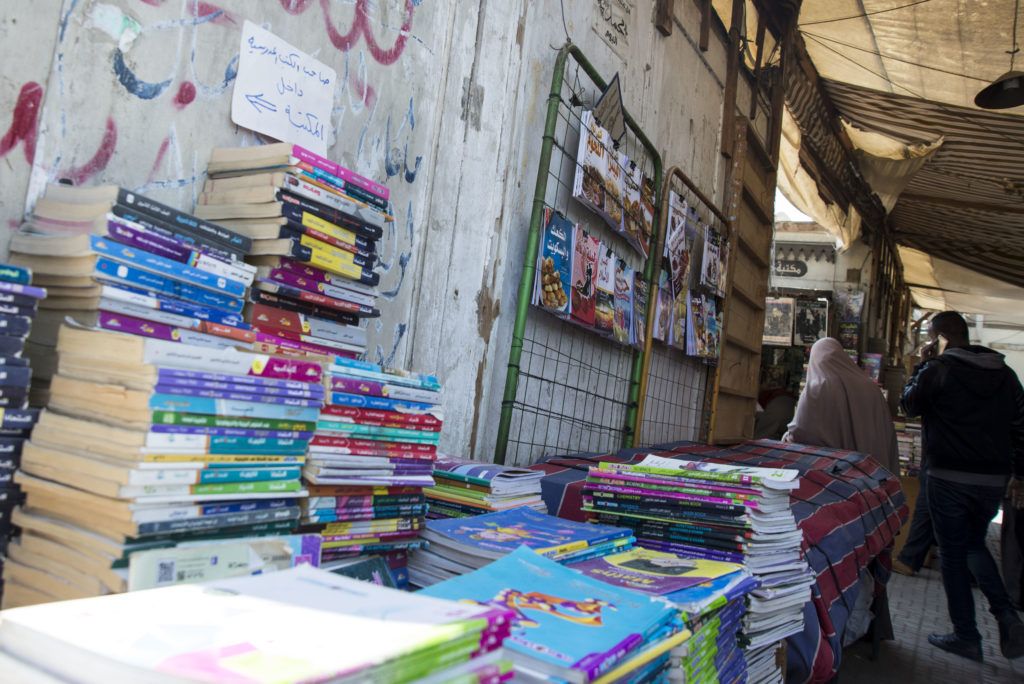 A stroll through the book fair this year revealed that most bookstores in the Azbakiya section were selling recent English language publications, with tens of copies all wrapped in new covers, looking as if they just came from the printing press.

Ahmed Bedeir, deputy head of the Egyptian Publishers Association,  confirms that Arabic reprints are increasingly less prevalent. The publishers association is an umbrella organization which brings together publishers and represents them in negotiations over the law. “Lately, we have been working closely with the responsible authorities,” he says. However this comes after a period of minimal intervention, in the years immediately following the 2011 revolution.

“The pervasive flaw in the current copyright law is that imprisonment is optional.”

According to Bedeir, the authorities only take action only when a complaint is officially filed by the company or author whose rights are being violated according to the June 2002 copyright law.

For the association, this is not enough. It has been preparing its own bill for copyright protection, with the aim of imposing stricter punishments for copyright infringements. “The pervasive flaw in the current copyright law is that imprisonment is optional. As in the judge can choose either imprisonment or a fine,” according to Bedeir. Most often the judge opts for the latter, he says.

According to the current law, those found to have infringed on copyrights are sentenced to at least one month in prison, and may be issued fines from LE5,000 to LE10,000 as well as, or instead of, the prison time. The law also permits the confiscation of the offending goods.

However, Saeed asserts that while the authorities often raid booksellers and confiscate pirated stock, the printing presses often remain unscathed. 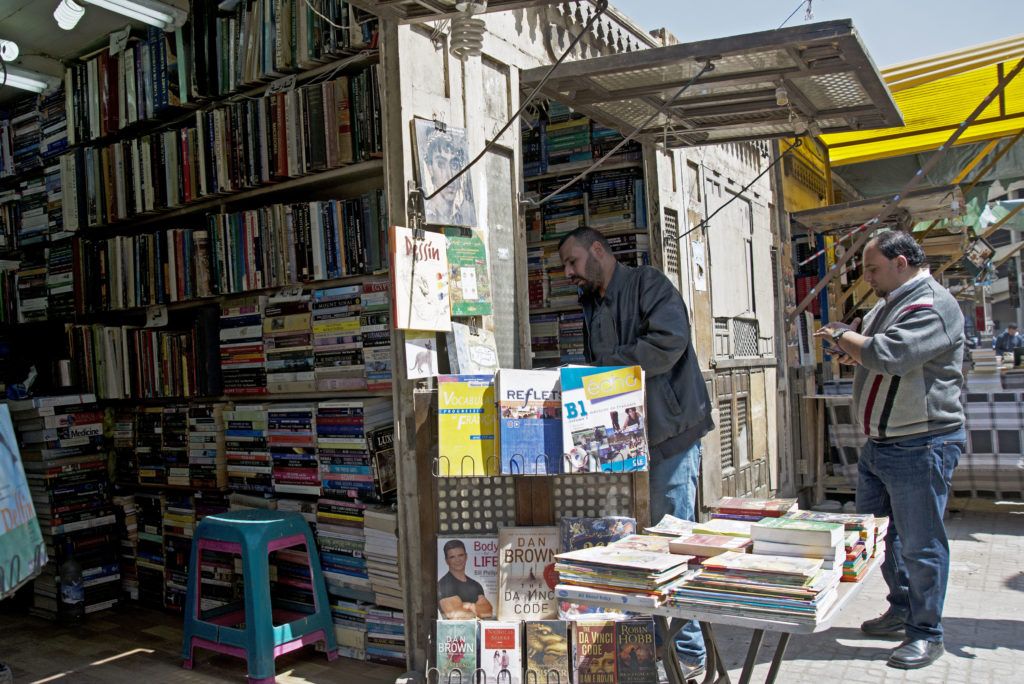 The decision to reprint and sell copyright-protected English language books is not only propelled by the authorities’ lenience, and the fact that foreign publishers rarely file lawsuits. It is also an economic choice, driven by supply and demand.

Severe foreign currency shortages, lasting several months, resulted in the growth of a dollar black market in late 2016, boosted by importers’ demand for hard currency at a weaker value to the pound. Subsequently, the Central Bank liberalized the exchange rate on November 3, 2016.

This resulted in the loss of half of the pound’s value within a day, making imports more expensive. It also contributed to the acceleration of Egypt’s annual inflation rate, which exceeded 30 percent in February, indicating a decrease in people’s purchasing power.

As with all sectors operating in the real economy and facing the consequences of the simultaneous rise in costs and fall in demand, the informal publishing sector focused its efforts on where the purchasing power lies. Namely, English language books. In doing so, they halted import of fake English language copies and expanded their printing operations in Egypt.

“English language copies were imported from countries such as India, but these imports have become expensive and nobody imports them anymore,” says Masry. According to Saeed: “The printing of English language books has been going on for more than three years, but it increased significantly this year because the fall in the value of the pound made imports more expensive.”

Formal publishers were left to deal with the woes of the currency crisis, as the the main component of their industry, printing paper, is imported and the books themselves are not considered a basic need.

News forms of dissemination are needed in order to benefit an audience beyond middle and upper-middle class book consumers who can read English.

Accordingly, “they have absorbed most of the cost hikes, because they know they can not double their prices as cost doubles, as this would mean they would not sell at all. Like what happened to Arab publishers,” says Bedeir.

“At best, those who earned a certain level of revenue last year, earned the same revenues this year,” he says. But this would be at a greater cost, with lower sales in terms of volume and fewer, if any, profits.

Aside from their domestic struggles, Egyptian publishers, like other Arab publishers, are able to make profits from a growing market in the Gulf. According to a report published by the Economist in June of last year, a growing middle class and expat population in the Gulf are demanding more Arabic publications. While domestic costs and sales have been hurt by the weakening Egyptian pound, foreign sales have become more profitable with the higher value of the dollar compared to the pound.

But for the publishing sector to reach Egyptian and local readers across the economic barriers that are reinforced through copyright protection, news forms of dissemination are needed in order to benefit an audience beyond middle and upper-middle class book consumers who can read English. 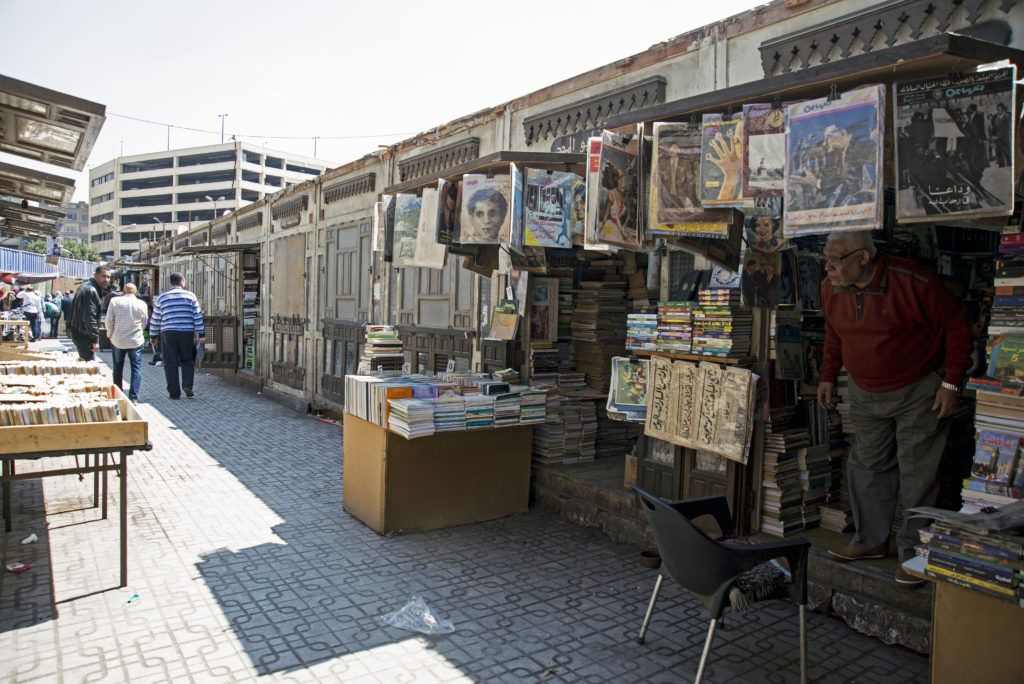 This could come in the form of pushing for institutional links between publishers and readers, such as public libraries and universities, or through new forms of knowledge transfer such as e-books.

Bedeir says that in order to sidestep the main source of the costs hikes related to printing, namely imported paper, the market is headed towards audiobooks and ebooks. Audiobooks, he says, is the new market trend and it has seen an influx of significant investments.

“There is the Vodafone project, Kotobi, and there is the larger and more successful Google Books. All of Egypt’s publishers are taking part in both projects in an attempt to reach out to readers in Egypt and other countries with a method that does not use paper.”

Kotobi and Google Books are all selling ebooks at  relatively cheaper prices than the paperbacks produced by publishers such as Al-Shorouk, Al-Dar Al-Masriah Al-Lubnaniah and Sefsafa. But they are still pricier than the books sold at Azbakiya, with the significant gap more obvious in English reprints. For example, Harper Lee’s To Kill A Mockingbird is sold on Google Books for more than LE200, while its reprint is sold at Azbakiya for LE25.

Despite the falling profits for publishers, the opening of new bookstores over the past few years provides a some hope. The publishing scene has also seen several small new companies enter the market.

Unlike the larger publishers, these new entrants, such as Lamha and Roeya, have provided the Azbakiya bookstores with an alternative by selling them publications at a discount that can reach up to 50 percent, Ramy al-Masry, a seller at one the bookstores, tells Mada Masr.

All photos by Basma Fathy

AD
You Might Have Missed
Carbon Colonies & A Green New Deal
What we talk about when we talk about trees
Where do old lesbians go to die?
Mugamma revisited: Reimagining the building and the square
AD
Waad Ahmed
28 articles on Mada

Topics
Related
archives
Video: How can we fit the world into folders?
Rowan El Shimi | This Alexandrian bookseller has independently created a massive scholarly archive
2016 year enders
In the year of the economy, Egyptians kept their eyes on the dollar
Heba Afify | Can the conversations that have emerged amid Egypt's economic crisis get at the root of economic policies?
AUC Press
A growing niche: The rise of English as a literary language in Egypt
Rowan El Shimi | I was born in Egypt, raised in Egypt, went to a school that mixed both English and Arabic, and I consider
Ahmed Naji
More readers, better designs and unlikely bargains at the Cairo book fair
Lara El Gibaly | The most visible phenomenon in this year's fair is the sweeping presence of Egyptian colloquial Arabic