On part of PhotoCairo6: Enormous parents and the fear of falling
Thinking about nation, family, Hosni Mubarak, obedience and rewriting the past

Moving among the exhibited works produced during the An Open Space Between the Text and the Image workshop, part of PhotoCairo6: Shadows of the Imperceptible, I had a feeling of strolling through the pages of a diary — or a group of diaries. The presence of parents impregnates the air of the Contemporary Image Collective through the works of the seven artists. Being in the space, I was transported to the mythical realm of childhood, replete with a stream of memories. Like many of the works, my own childhood memories are colored with a sense of smallness — especially in the face of the enormity of my mother and father. They represent safety and authority in the same breath.

I sat down on the floor, facing a monitor on which Lamiaa Younes’s eight-minute video, Inner Voice, played on loop, and  placed the headphones on my ears, watching and listening. The aesthetic reminded me of homemade videos from the 1990s. My father used to take videos of me and my brother as children, with his voice omnipresent in the background. But this time, the roles had been reversed: Younes is the one in control of the camera, the voice-over and the montage. She is the one who seems to be giving cues for her parents to perform themselves. They seem happy to do it, almost as if they are playing.

In the Book of Genesis, God creates a beautiful garden for Adam and Eve in which they are free to play as they please under one condition: obedience. An act of insubordination results in a fall from grace. As I watched Younes’s video, I had the feeling that she was exploring a similar choice. Visually, it conveys a sense of warmth and familiarity associated with the picture of a happy home: Her mother combs her hair on a bed with a teddy bear, then we cut to her father seated on a chair in his robe and they play a game. She seems to play the role of obedient daughter accepted within the family hearth. But a tone of uncertainty in her voice-over and frequent allusions to a sense of discomfort with an underlying fear that slips from that role deconstruct her internalized picture of a happy family. At the beginning, the act of her mother combing her hair suggests a sense of comfort and even enjoyment on her part. But when her mother pulls a bit too hard, she seems to forget the camera and cries out in pain, “You’ve hurt me!”

Younes does not appear on screen with her father, except as a disembodied voice, and he takes up the entire screen. She has him draw a slip of paper from a glass jar: “Father, do you think I’m pretty?” In this moment, as he sits on his chair, he could be standing in for multiple men, and the question holds multiple questions. What does it mean for a woman to be thought of as “pretty,” and particularly by a man? Does it mean to be seen? Is she asking him if he can really see her? Does it mean she is worthy of adoration? Is she asking him if he loves her as she is? Her decision to include her father’s answer in the video displays the two roles she is presented with. As he ventures into the metaphysical landscape of beauty, he repeatedly compares her to her sister, whom he clearly disapproves of, describing her as a breeze and her sister as a storm. “My father doesn’t like sass. It’s not that I want to be sassy but …” Younes trails off.

The sequence with her father lays bare doubts and insecurities that are bound up with female beauty and the subsequent roles offered to women to occupy, not just on screen but on the street and in their homes. What must a woman hide in order to be respected? What must she show in order to be desired? And, if there is a contradiction between these two, can a woman ever be loved as fully human and in possession of a complex nature with many facets, not all of which are “pretty?” I recall the words used around me as I grew up to describe any woman defying the conventions of respectable women of a certain class — a language used to instill fear of becoming like “them,” the fallen. To fall out of line means a fall out of grace. It is dangerous to become less of a breeze and more of a storm.

But the video opens up questions beyond female experience and its relationship with beauty. It had me thinking about the tension between the need to be accepted and the need to rebel; how one’s relationship with parents is enmeshed with one’s relationship to the community, which is in turn enmeshed with one’s relationship to country, to homeland. Disobeying authority thus carries a deconstruction of safety, even if this safety is cosmetic in nature and painful to maintain. Sometime in January 2011, I was with my parents when we saw some children taking down an oversized portrait of Hosni Mubarak from the facade of their school. I remember feeling a mixture of terror and delight. In light of the experiences of the past six years, perhaps it makes sense that many of the artists exhibiting works in Shadows of the Imperceptible chose to reflect on the home within the home, on the politics and propaganda of the personal.

A few days earlier, I visited the Shadows of the Imperceptible exhibition at the Saad Zaghloul Culture Center. The entire complex of buildings and streets there brings to mind the national history curriculum in elementary school: The home of Saad Zaghloul, which now houses the center, is referred to as “Beit al-Umma,” the house of the nation, while Zaghloul is referred to as the “leader of the nation,” and his wife Safeya the “mother of the Egyptians.” The works produced by the “Playing with Light” workshop were exhibited in one room. 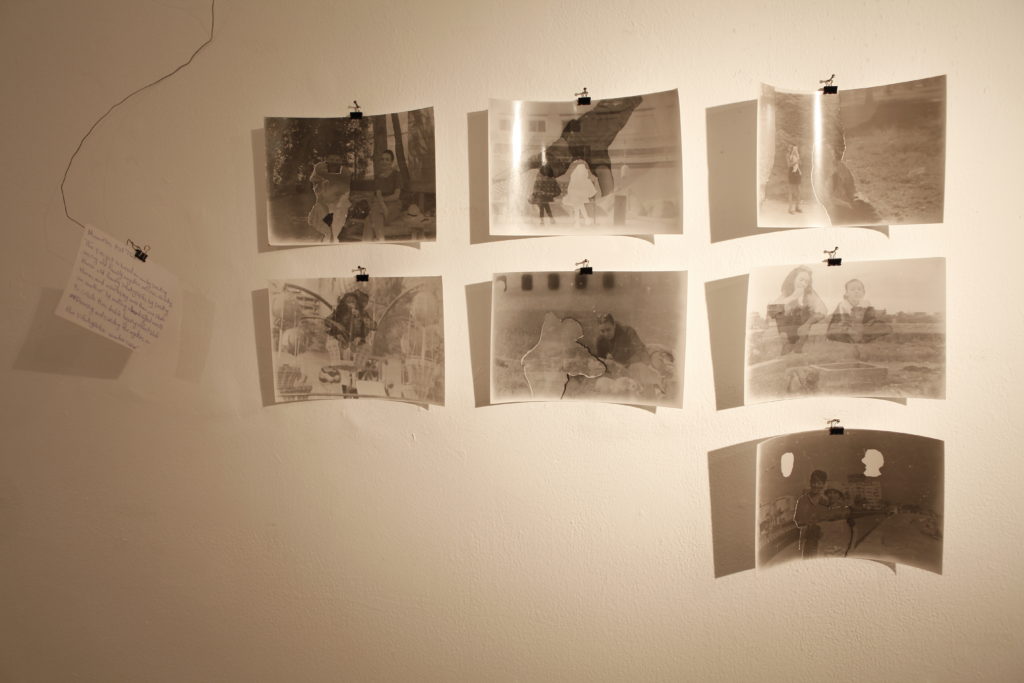 One of these is a collection of photographs by Donia Shohdy, titled Memories Kill Time. They convey a feeling of play and lightness. Using darkroom techniques, she has deconstructed and reconfigured some family photographs, suggesting an attempt to take control over the narrative of her past, through playing with light and what is visible. Even if she is not the original photographer, it is through her eyes that we see the images now. In a way, it is similar to how Younes showed her family’s performance of a happy home only to take it apart through a voiceover. I see in Shohdy’s choice of both technique and subject an attempt to smear the significance that certain narratives of the past can hold in the present, and through this perhaps open up possibilities of playing with roles which had not been available in childhood. One image layers an image of her father with one of herself as a child, and he appears much smaller in size, as if inside her. Do children swallow their parents as they are swallowed by them? Do they hover over their heads, vocally haunting them with the ways they have failed them?

It is hard for a child to escape the enormity of a parent. It can be hard to not swallow their voices and absorb them completely, to the point where it is hard to find where one ends and the other begins. But I found in Shohdy’s work, as in Younes’s, a possibility of finding some flexibility in this complicated relationship. I liked Shohdy’s approach to the past as it offers history up as a living being to wrestle with. The past can then be rewritten through the lens of the present — not in an attempt to beautify it, but to reveal a multiplicity of narratives, and perhaps to release the stranglehold of one “authentic” narrative on the imagination. A sense of smallness still pervades my experience, a smallness in the face of things that I was not aware of as a child, or perhaps had not yet named.

Mubarak’s trial is now over, and he has been declared innocent — the state too is trying to rewrite the past. But there are certain experiences, like the ones parents can visit upon their children, which are not displayed in official archives but are contained within the bodies of those who live them. Stories which are told and retold, perhaps in attempt to resist, or to heal, or to reveal what can never be fully told. But these two artworks left me with an indelible question: How complicit are we in maintaining the roles we inhabit, and just how much of that complicity can be traced back to the fear of falling?

PhotoCairo6 runs at the Contemporary Image Collective and the Saad Zaghloul Culture Center until March 23. This text was commissioned by Lina Attalah. For another take on the show, click here.

AD
You Might Have Missed
Mugamma revisited: Reimagining the building and the square
Carbon Colonies & A Green New Deal
What we talk about when we talk about trees
Where do old lesbians go to die?
AD
Mariam Ibrahim
3 articles on Mada

Topics
Related
visual art
On a part of PhotoCairo 6: Defying romanticized notions of motherhood
Menna Ekram | Real, crude, honest and relatable accounts of mother-daughter relationships
visual art
Evasive Routes: Art that reflects a current desperation, and a little hope
Ismail Fayed | The claustrophobic feeling of things repeating themselves without the possibility of a different outcome.
Aleya Hamza
A history of CIC’s 10 years in posters
Jenifer Evans | On the 10th birthday of the exhibition space, library, photography school and photographic facility,
book reviews
Neither too soon or too late: The PhotoCairo5 catalogue
Naira Antoun | The bilingual publication released last month to accompany the 2012 PhotoCairo5 exhibition continues