On a part of PhotoCairo 6: Defying romanticized notions of motherhood
Zooming in on three real, crude, honest and relatable accounts of mother-daughter relationships

Walking into An Open Space Between the Text and the Image at Cairo’s Contemporary Image Collective, I feel I am entering a space in which seven female artists share the results of an interactive process focused on their relationships with their mothers. In interacting with their works, we reflect upon our own experiences with motherhood.

The exhibition is part of Shadows of the Imperceptible, the five-week public articulations of the sixth PhotoCairo, and it emerged out of a photography and writing workshop led by painter Heba Khalifa and writer Ghada Khalifa. Its narrative, created using imagery and text in a diversity of display modes, defies romanticized notions of motherhood. The results are more real, crude, honest and relatable than the picture-perfect images you find by Googling “mother and daughter.” I will zoom in on three of these works here.

In a simple but haunting 8-minute video, Lamiaa Younis sits between her mother’s legs and surrenders to the comb being run through her hair to tame it. Titled Inner Voice, the work represents the ordinary Egyptian middle class in an rare moment of intimate communication. As adult women we never get our hair combed by anyone, but Younis relives that well-known childhood moment.

Mother and daughter are present in the video, but lurking in it also is that long tradition of all mothers who have spent time trying to make their daughter’s hair smooth and beautiful. The surrender to this ritual may be painful; it gives the power to the comb-holder and makes the daughter vulnerable. In this imbalanced power dynamic is a suitable setup for a moment of intimacy, the need for touch: In a society where women are not usually allowed to express emotions or hug it out, they come up with rituals of combing hair, hair removal, or plucking eyebrows, to touch and connect — but still someone has the power and the other is vulnerable. And, more importantly, these moments of intimacy function to make women more beautiful for men.

Just as the weight of these realizations start to sink in, the video cuts to Younis’s father, who speaks about marriage as destiny, and says he has two daughters, one rebellious and the other more obedient. That timid girl who combs her hair with a wide-toothed comb and dries it with cotton towel and makes it to a bun, as her mother instructs her, so she can have beautiful hair.

Just across from the video is a self-portrait of Zainab Magdy in her living room, a noticeably over-sized photo stuck on the wall. The elements in the picture constitute home, a place we choose and accessorize as we choose, including with items from our previous houses and what we take from our family houses, from our mothers. Magdy even titles her installation with a clear reference to her space: Room for Zouzou. 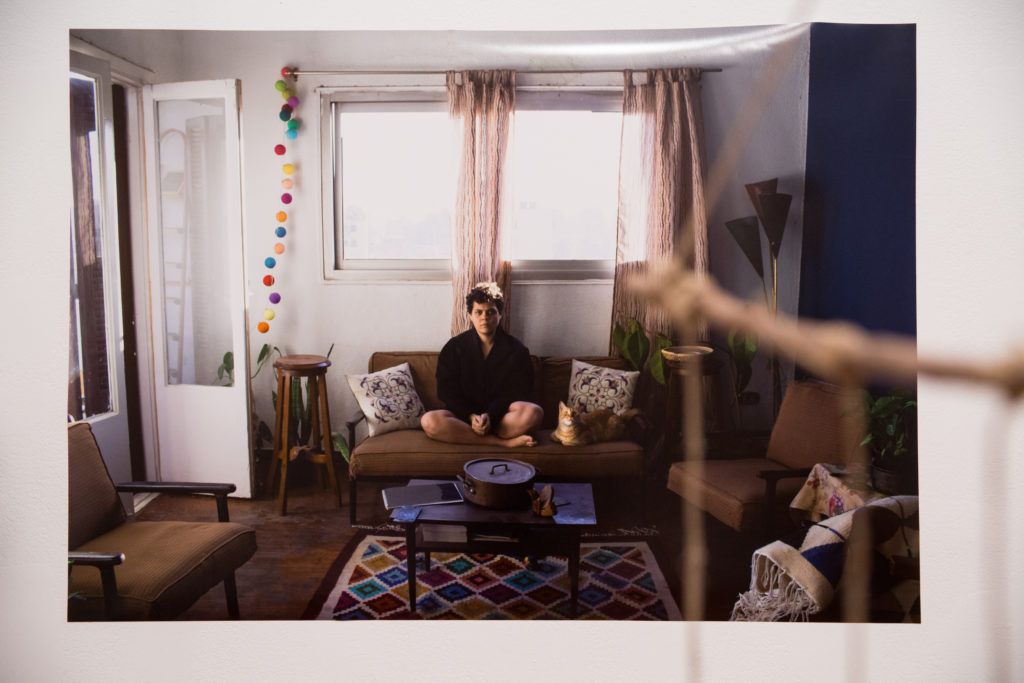 Using slender rope and some laundry pegs hanging from the ceiling, Magdy airs her emotional laundry through standard-sized photographs and handwritten texts: pictures of herself, and texts about how she and her mother look alike. This exploration of where she starts and where her mother ends is inspiring, painful and scary, but also cathartic for both artist and audience.

In one of these texts, Magdy writes: “Every time I see you, you are going home with a thing you bought for the house.” Here only one thing comes to mind: the assimilation between a mother and the household. She is always presenting offerings on the altar of the home, needing to make things right because of the underlying sense of guilt between what these mothers thought motherhood would be like and the reality of it. This guilt results from the difference between motherhood on its daily gruesome basis and the romanticized notion of selfless giving in the patriarchal narrative of motherhood.

Exploring this space between reality and fantasy, this sense of mutual guilt, the guilt of being a mother and that of being a daughter, is also beautifully expressed in the work of Radwa Tarek, titled The Curse of Mother. She writes two texts: One speaks of the reality of the mother-daughter relationship, and the other speaks of motherhood as a curse. Between the two texts are photographs stuck on the wall of the artist and her mother in elaborately designed scenes that seem mundane, but with a touch of a mystical bond, as mother and daughter look into a mirror or are cut open into two halves.

In the realistic text, Tarek speaks of not being able to sleep if she has a fight with her mother. Even if it’s not her fault, she folds and takes the blame so they can be on good terms. In the curse text, every day at 4 pm mothers throw their kids from balconies. In the realistic text, she writes that her mother is the only person who inflicts pain on her, and for her as a daughter this is justifiable and it makes her stronger through breaking her. In the curse text, the mother wants to travel, because she knows she will throw the children off the balcony, but an illness stops her. At the end of that text, the mother dies. Death becomes a resolution, so as not to have the mother as evil antagonist. 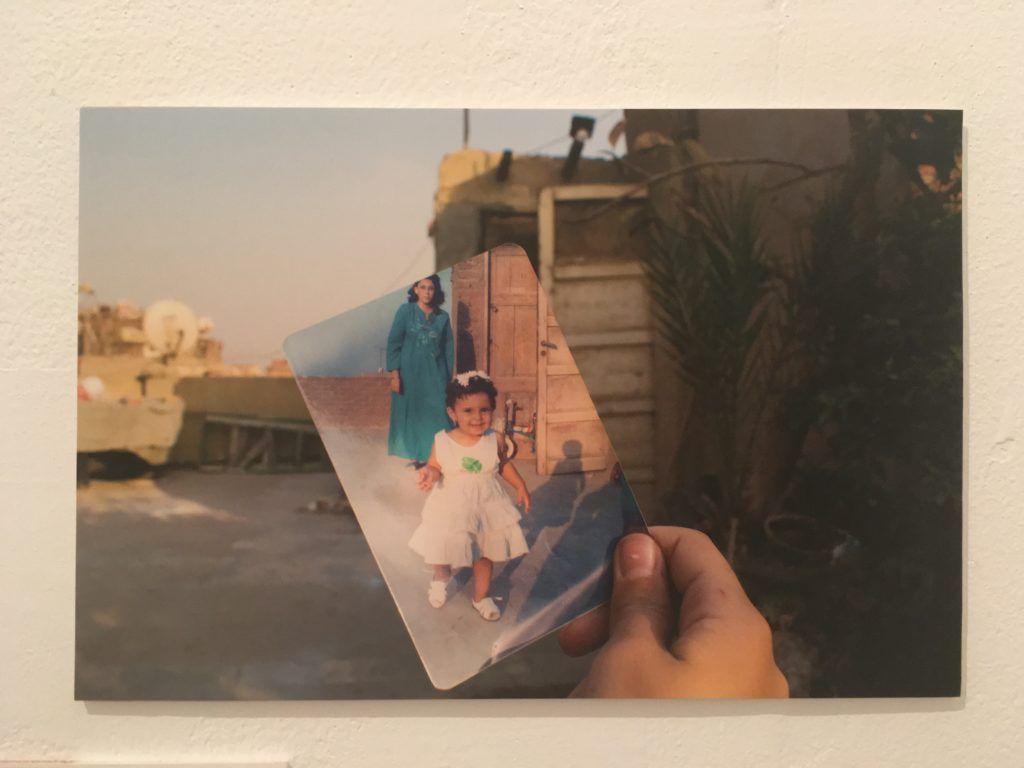 The photographs that accompany these texts include one of Tarek and her mother as two halves to complete one face: one that is young, the other with lines of age, both have sad eyes, both are veiled and they are one, at least for this moment. Another photograph is that of a hand holding a photo of the artist when she was younger wearing a white embellished dress, as if she is a bride, running towards us, and her mother in a blue dress trying to keep up with her to keep her safe. This picture was taken on a roof, and the photo of the photo is taken on the same roof. Perhaps it’s suggesting that this dynamic still burdens the artist, or that it’s what ties together all mothers and daughters — that long line of guilt-fueled relationships that are so beautiful and haunting.

I find these works, and how they present motherhood as their makers have lived it, refreshing: They make me feel that the narrative we have been fed over the years is just another patriarchal gimmick — one that makes us unable to appreciate the complexity of such relationships, however far they are from ideal.

PhotoCairo6 runs at the Contemporary Image Collective and the Saad Zaghloul Culture Center until March 23. This text was commissioned by Lina Attalah. For another take on the show, click here.

AD
You Might Have Missed
What we talk about when we talk about trees
Mugamma revisited: Reimagining the building and the square
Carbon Colonies & A Green New Deal
Where do old lesbians go to die?
AD
Menna Ekram
3 articles on Mada

Topics
Related
Mother's Day
Motherhood as choice
Dina Hussein | It was one of those rare occurrences when I was not too tired to make babysitting arrangements, dress
downtown Cairo
A beginner’s guide to downtown’s alternative art scene
Rowan El Shimi | Downtown Cairo has long had a strong relationship with the arts. It boasts the capital’s largest cluster
Aleya Hamza
A history of CIC’s 10 years in posters
Jenifer Evans | On the 10th birthday of the exhibition space, library, photography school and photographic facility,
book reviews
Neither too soon or too late: The PhotoCairo5 catalogue
Naira Antoun | The bilingual publication released last month to accompany the 2012 PhotoCairo5 exhibition continues