The cleric and the president: Egypt’s critical power struggle

President Abdel Fattah al-Sisi and Al-Azhar Grand Sheikh Ahmed al-Tayyeb settled a disagreement over verbal divorce in a recent meeting, but the accord does not signal an end to the ongoing struggle for power between the state and Egypt’s largest Islamic institution.

Sisi met Tayyeb in the presidential palace in late February, praising the role Egypt’s top Islamic institution has played in fighting terrorism and religious extremism. The meeting came on the heels of a strong statement issued by Al-Azhar, rejecting Sisi’s suggestion to end verbal divorce amid a discussion of rising divorce rates.

Verbal divorce refers to undocumented divorce, which is often used by men in an attempt to pressure women into giving up alimony rights. But Al-Azhar’s statement affirms that the practice is Sharia compliant.

Immediately after the statement, Al-Azhar was slammed by local media which accused Tayyeb and Al-Azhar’s Supreme Council of Scholars (SCC) of having affiliations with the Muslim Brotherhood, despite the institution’s support for the Armed Forces’ move to depose the government of former President Mohamed Morsi in June 2013.

The criticism went as far as demanding Tayyeb submit his resignation. Many pro-Sisi media outlets have framed the conflict as an attempt by conservative clerics to resist Sisi’s reformist and progressive agenda. These arguments were echoed in the coverage of some international media platforms, such as the Economist, which claimed that Tayyeb is standing in the way of Sisi’s aspirations to renew religious discourse. The London-based newspaper argued that Al-Azhar has allowed extremist elements to infiltrate its leadership.

The recent conflict, however, is only a cross section of the larger issue, which runs deeper than a disagreement over religious reform. In fact, there are many indications that Sisi may share many of Al-Azhar’s conservative tenets, which poses the question: If discord is not centered on a secular-liberal form of Islam, what is at stake in the conflict between the state and religious institution?

Take, for example, the fact that the state has charged a number of writers and researchers with contempt of religion, including researcher and reformist preacher Islam al-Beheiry and writer Fatima Naout. Novelist Ahmed Naji, who was only recently released, was sentenced and held in prison for harming public morals for content included in a chapter of his hybrid graphic novel Istakhdem al-Haya (The Use of Life, 2014), published in the state-affiliated Akhbar al-Adab magazine.

Several government institutions have also implemented a range of conservative policies since Sisi came to power in 2014. The Endowments Ministry has led numerous campaigns to oppose atheism, while the Education Ministry introduced an “intellectual and moral security” component to its school curriculum. In statements during his presidential campaign that portended many of these policies, Sisi placed an emphasis on establishing the state as an agent of moral authority.

These policies do highlight a disagreement over divergent approaches to religious reform, but more importantly they bring to the fore institutional, political and historical issues.

“We never play around in politics. We are not suitable for this game. We don’t understand it, and, if we ever become involved in politics, we will be burned. Our role is only nationalistic,” Tayyeb says in a 2014 interview.

In a post Brown published on Carnegie’s blog, he refers to a clash in the personalities of Sisi and Tayyeb that dates back to Morsi’s ouster. Despite his support for the deposition of the Muslim Brotherhood, Tayyeb objected to the violence used against Morsi supporters on a number of occasions, including during the 2013 Republican Guard headquarters clashes and the dispersal of the Rabea al-Adaweya sit-in. The personal conflict escalated when Al-Azhar rejected the Endowments Ministry’s decision to unify the content of Friday prayer sermons.

Amr Ezzat, a researcher on religious freedoms, previously told Mada Masr something similar, saying that the way Sisi framed his request to abolish verbal divorce was considered an insult to the prestige of Al-Azhar. “It appeared that Al-Azhar is offering services upon the request of Sisi,” Ezzat said.

Brown also asserts that Al-Azhar’s views on religious reform in principle favor “careful and studied steps and resist those that they see as violating Islamic law.”

Most importantly, there is an obvious politically-driven conflict, mostly over the balance of power between the two institutions.

“Tayyeb is in a far more independent position than his predecessor. Sisi is discovering this just like Morsi discovered it,” Brown explains, referring to a February 2012 amendment to the law regulating Al-Azhar that passed days before the Muslim Brotherhood-controlled Parliament convened.

“The change made in Al-Azhar’s leadership structure by the Supreme Council of the Armed Forces was designed to keep Al-Azhar independent from the Brotherhood, but it works regardless of who is president. It makes the sheikh and the senior leadership structurally autonomous, like the Supreme Constitutional Court,” Brown adds. “But it does more than affect the structure. It gives the grand sheikh a body of senior scholars that he can call on to give himself much more symbolic strength.”

Brown points to two incidents in which Al-Azhar relied upon the power of the clerical leadership around him: once during Morsi’s presidency when the the institution came out in opposition to a United Nations meeting on the Convention on the Elimination of All Forms of Discrimination Against Women, and secondly when Al-Azhar rejected the unified Friday sermons.

The 2012 legal amendment ended executive control over Al-Azhar, allowing Al-Azhar’s grand sheikh to be elected by the Supreme Council of Scholars, whose members are in turn chosen by institution’s head. The amendment also extended Tayyeb’s tenure to a life term. The initial law that regulated Al-Azhar was drafted in 1961 during former President Gamal Abdel Nasser’s time in office and put the institution under complete executive control. In the lead-up to the legislation, the government had seized all endowed lands under the powers granted to the state by the agricultural reform law. The lands had provided Al-Azhar with financial independence for centuries.

While a degree of independence has helped Al-Azhar in its conflicts with political leadership, the state’s control over financial support to the institution curtails its autonomy. Following the June 30 ouster of Morsi, the money earmarked for the institution’s budget dramatically increased. 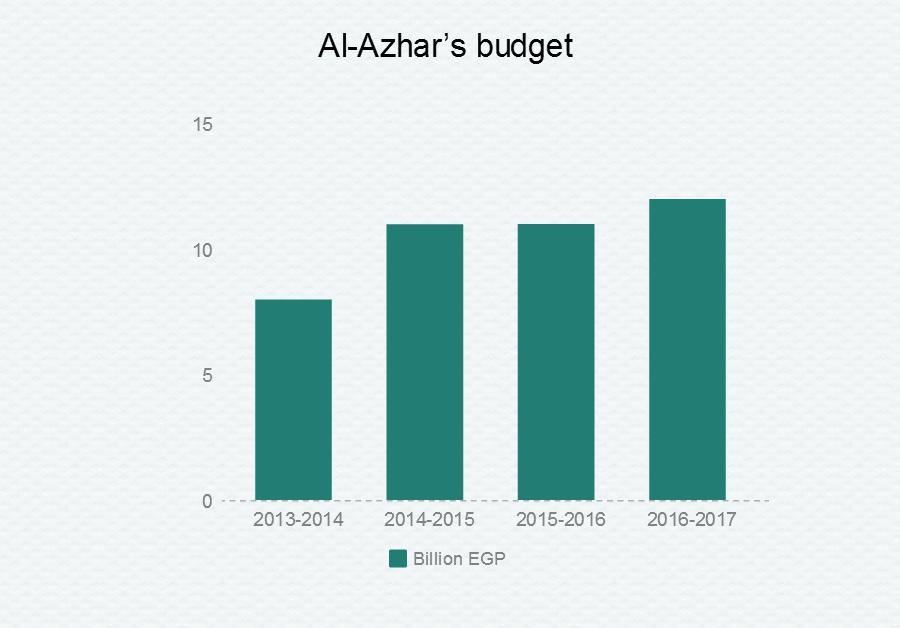 Mohamed Medhat Mandour, a researcher in the law and society department at the American University in Cairo, tells Mada Masr that the Endowments Ministry and Al-Azhar, or what he calls “the state’s ideological institutions,” are of great importance to the government, especially as its fight with Islamists intensifies, a valuation that might explain the jump in Al-Azhar’s budget from LE8 billion in 2013 to LE11 billion in 2014.

“Al-Azhar wants to deliver a certain message to the presidency, that the institution cannot control the religious sphere while it is too attached to the state, and that the state should give Al-Azhar enough space to freely move,” he says.

To replace the role of the Islamist groups, like the Muslim Brotherhood, with state-controlled institutions, like Al-Azhar, is a very difficult task, Mandour says, especially given the extent of the social support networks that the Muslim Brotherhood established decades ago to offer services to the poor. “This is where the funding issue is important. Authoritarian regimes are keen on financing their legitimacy,” he adds.

But it is difficult for the state to use funding as a weapon to completely control an influential institution as large as Al-Azhar, after new constitutional and legal changes, Madour argues. “Al-Azhar will win in its confrontations with the state because no other institution can replace it. The institution has a position similar to the Armed Forces, and its symbolic role is too big to be touched by the state.”

Efforts initiated by Member of Parliament Mohamed Abu Hamed, however, may change the rules of the game. Abu Hamed is working to prepare amendments to the law regulating the religious institution that would bring Al-Azhar back under state control by giving the president the power to appoint both Al-Azhar’s grand sheikh and the Council of Senior Scholars. The tentative amendments would also widen the membership of the council to include non Al-Azhar clerics. These changes would conflict with the Constitution and could further escalate the tension, if passed.

AD
You Might Have Missed
Mugamma revisited: Reimagining the building and the square
What we talk about when we talk about trees
Where do old lesbians go to die?
Carbon Colonies & A Green New Deal
AD
Mai Shams El-Din
161 articles on Mada

Topics
Related
Al-Azhar
Tensions arise between Al-Azhar and presidency over verbal divorce debate
Mai Shams El-Din | Sisi's proposal to end verbal divorce has highlighted tensions between the state and Al-Azhar
contempt of religion
Al-Azhar University professor suspended on accusations of promoting atheism
Professor of religion and philosophy at Al-Azhar University suspended for three months for promoting
Friday sermons
Al-Azhar picks battle with the state over written sermons
Mai Shams El-Din | Anger over the decision to unify the Friday sermon has extended to Egypt’s Al-Azhar religious institution.
Al-Azhar
Al-Azhar and the dinosaurs
Tarek Ghanem | “Sheikhs issue religious edicts for the price of two chickens. They are no more than stooges of backwardness,