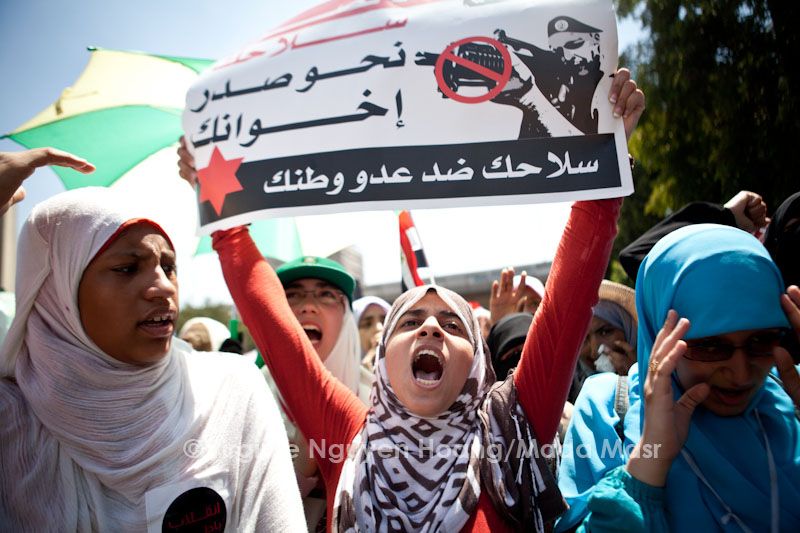 I’ve been working on bodily rights since the revolution. Before 2011, I was a really ordinary woman. I wondered when I’d get married, when I’d have kids, that kind of thing. But since I was young, I always had questions, things I wanted to know and understand and most of these were to do with being a gendered subject.

I was brought up in a lower-middle class family in Mahalla, and there was no one in my family who engaged in political activities, or even charitable ones. We had no connection to the public sphere, a family unto itself.

After the revolution, I felt like I wanted to take part in the things happening around me and I thought, why not? I started noticing things that needed to be fixed. And what was happening shed light on the things that I felt were wrong, and I said no. A no that wasn’t frightened about what would be said about it, not frightened of family punishment. A clear no, because things could not carry on like this.

I started to take part in demonstrations and other political activities, and I began to notice that my presence on the streets was like my presence at home. At home, I was told not to go out at night, not to come back late, to dress a certain way, and if someone harassed me, it must have been because of something I did. At demonstrations, people pointed me toward cordons for women so I wouldn’t get harassed, telling me I couldn’t dress a certain way because of the revolution’s reputation. There was something similar in the private space I was coming out of and the public space I was coming into, and they were linked to my being a woman.

At the time, I heard a lot of people talk about politics, but not about women. I didn’t even know there was a women’s movement in Egypt. I decided to found something called Girls’ Revolution, a feminist platform on Facebook where women could share their experiences.

They talked about many things, including physical and sexual violence they faced at home. And one point, they were very focused on the issue of the veil, which was also important to me personally – I was veiled at the time, but not out of choice. I took it off  in May 2012. Part of being able to find the strength to make that decision was largely because of Girls’ Revolution. People usually understand it wrong – they think that because I am the founder, I influence the women who take part, but it’s the complete opposite. Because of my role, I began to take note of the many different experiences around me, and it was these that influenced my own.

The idea I had for Girls’ Revolution was that it could become a platform for women to have discussions about things on their mind in a safe space. We had offline activities too, but we found that online you could bring up sensitive topics in a way that you couldn’t in public or through activities. There are things I couldn’t say on the street, but I could in a space that I could moderate to a great extent.

Choice as a woman’s right is a principle we believe in in our work. So if someone chooses to be veiled, for instance, that’s up to her, but she can’t try to impose a choice she made for herself on another person in different circumstances. We don’t say anything about religion, just that a woman always has a choice. Regardless of the content of her decision, the important thing is that she ultimately decides for herself, or is at least aware of the conditions of her choice, even if these conditions are coercive to some degree.

For example, regarding the question of abortion, we talk about the right of choice – my right to choose whether I will carry on with a pregnancy, my right to choose if I want to be a mother. The discussions also shed light on the difficulties of getting an abortion and the stigma surrounding a woman who has one.

The state says that this is a body that cannot be pregnant except in a particular framework – that of registered marriage – and if it gets pregnant it must proceed with it, unless the woman is sick. But say, I am pregnant and I’m not sick, but I have four children and don’t want a fifth, I won’t be able to afford fifth, what do I do? The state’s answer is that you have to carry the pregnancy to term. For society, someone who gets pregnant in what is considered an illegitimate framework should not be able to abort as a kind of punishment – you had sex outside of marriage, so bear the consequences of your actions.

In Girls’ Revolution, we’ve seen development in relation to abortion. When the topic was first brought it up in 2013, abortion was considered by most as completely unacceptable, but we’ve noticed that now it’s the page’s users who respond directly to people writing judgemental things about it.

Historically, the women in my family didn’t have a problem with abortion: They’d perform the procedure at home. It was ordinary. Of course, there are different issues concerning awareness and visibility for married and unmarried women, where the latter often had to manage in secret. But the women in my family were all nurses, so I don’t know if that issue played a part in it.

I didn’t consider abortion such a big deal until I came to Cairo, until I entered politics. It was only then that I realized that the problems women face aren’t all the same, and how much class structures – among many other things – affected these issues.

This piece is part of Mada Masr’s series Feminist testimonies from Egypt.

AD
You Might Have Missed
What we talk about when we talk about trees
Mugamma revisited: Reimagining the building and the square
Carbon Colonies & A Green New Deal
Where do old lesbians go to die?
AD
Ghadeer Ahmed
11 articles on Mada