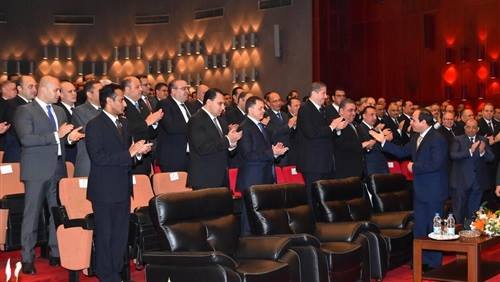 President Abdel Fattah al-Sisi conducted a symbolic visit to the National Security Agency on Sunday coinciding with the sixth anniversary of the breach of the former State Security Investigation Services building during protests calling for its dissolution in the wake of the January 25 revolution.

In what was reported to be a surprise visit, Sisi pledged “all his support for the agency in confronting current challenges, primarily terrorism,” according to an article published in the state-owned Al-Akhbar newspaper. The president added that “there must be an awareness of the number of security, political and economic challenges facing the state,” commending the agency’s role in protecting Egypt.

The SSIS figured prominently in chants during the 18-day uprising that ended Mubarak’s 30-year rule, with protesters calling for its dissolution. During protests on March 5, 2011, SSIS buildings across the country were breached by protesters. During the break-in at the headquarters in Cairo a torture device was found brought out of the building’s confines.

Protesters also leaked several documents following the raids, including lists of judges who helped rig elections in favor of Mubarak’s National Democratic Party. The military had requested protesters return the documents, and refrain from publishing them.

The SSIS was notorious for its role in political repression and human-rights violations, especially in the torture of dissidents.

In January 2015 an SSIS officer was implicated the killing of a man being investigated for involvement in a church bombing on New Year’s Eve, who was allegedly tortured to death. The officer was acquitted last year.

According to the statement issued by the presidential office on Sunday, the discussion revolved around “a strategy to confront terrorist and criminal activity within the framework of an integrated security system, implemented in coordination with the Armed Forces and other state bodies.”

Local reports said Sisi met with 350 of the agency’s officers for a period of 3 hours, among them Interior Minister Magdy Abdel Ghaffar.

A former NSA officer, Abdel Ghaffar was appointed minister during a cabinet reshuffle in 2015, also on the anniversary of the break-in. He replaced former Minister Mohamed Ibrahim who held the post since the ouster of former Muslim Brotherhood President Mohamed Morsi in 2013.

Although the SSIS was officially dissolved in March 2011 and replaced by the NSA, critics have argued the move was only a re-branding of the old body.