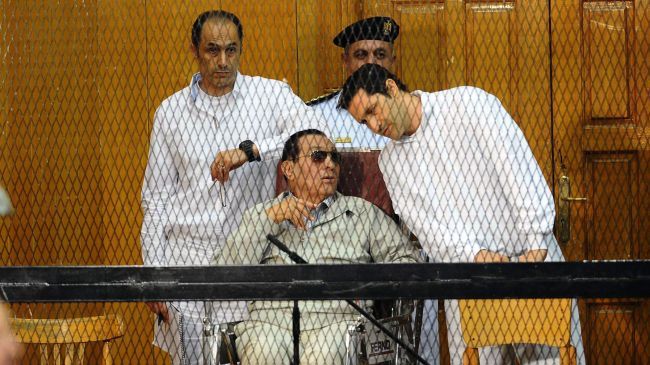 The Court of Cassation has ordered the final acquittal of ousted President Hosni Mubarak, clearing him of ordering the killing of protesters during the January 25 revolution in 2011.

Mubarak appeared at Thursday’s ruling in a wheelchair. He smiled and waved to a crowd of approximately 30 supporters the moment the verdict was announced. His eldest son, Alaa Mubarak, was also present in the courtroom.

This is the final ruling following an initial acquittal of Mubarak in 2014, which saw a criminal court dismiss the case against him alongside the charges of killing protesters and corruption in a gas deal with Israel. He had initially been issued issued a maximum sentence of 25 years in prison for ordering the killing of over 800 protesters in 2011. An appeals court ordered his retrial in 2015.

Farid al-Deeb, Mubarak’s lawyer, based his defense on the 2015 court ruling acquitting former Interior Minister Habib al-Adly and four of his associates of killing protesters in 2011. They were cleared of charges upon arguing that police personnel didn’t kill protesters, pointing instead to members of the Muslim Brotherhood and Palestine’s Hamas group, who they claim infiltrated demonstrators’ ranks. Deeb argued that this, by default, should be the basis of Mubarak’s acquittal.

The lawyer added that there was no evidence of Mubarak coordinating with Adly on the killing of protesters. He cited the testimonies of former intelligence chief and Vice President Omar Soliman and military commander Mohamed Sayed Tantawy, who both said that Mubarak issued no orders to kill protesters. During interrogations, Adly said that Mubarak did not typically consult with him over the use of certain security measures which fall within the scope of the Interior Ministry’s work, Deeb said.

The initial accusations leveled against Mubarak held him accountable for failing to stop the violence against protesters, but Deeb also argued that there was no evidence that the former president learned of the killings in the first place. He deployed military forces when the Interior Ministry asked him to do so, the lawyer said, adding that according to Law 183/1952 the Armed Forces are to be held liable for the security of the nation once they are deployed in the streets.

Deeb asserted that Mubarak was not attached to power, which is why he didn’t resort to violence against protesters and resigned upon learning that this was what they demanded. The lawyer cited the testimonials of several military personnel who claimed that Mubarak resigned under no pressure.

Topics
Related
Hosni Mubarak trials
Mubarak absent from retrial for killing protesters due to security concerns, case adjourned
The retrial of Hosni Mubarak for conspiring to kill January 25 protesters was adjourned on Thursday to
Court of Cassation
Court orders retrial of Mubarak for killing protesters
The Court of Cassation ordered on Thursday that ousted President Hosni Mubarak stand retrial for
Alaa Mubarak
A timeline of the Mubarak trial
Omar Said | The “trial of the century” — in which former President Hosni Mubarak, his sons, the former
Alaa Mubarak
Mubarak said not to harm protesters ‘even in his own bedroom,’ says former guard chief
Hosni Mubarak gave strict orders not to harm any protester “even if they stormed the presidential palace