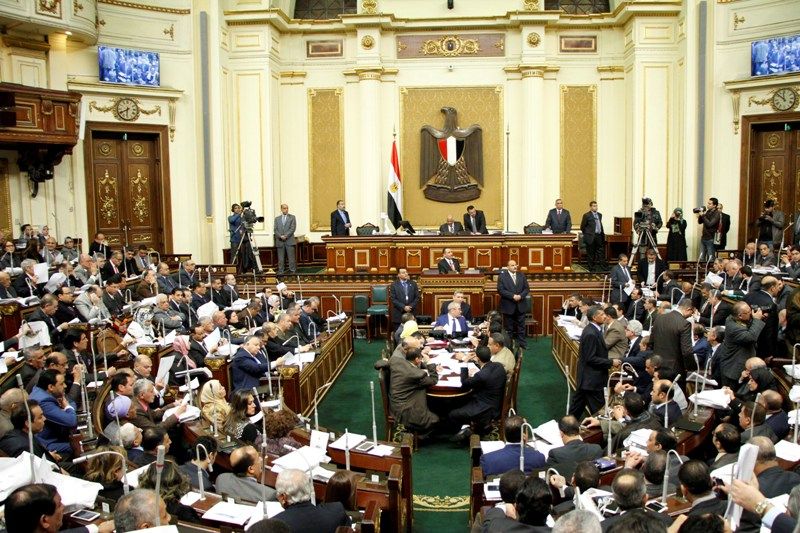 Egypt’s parliament referred journalist Ibrahim Eissa to prosecution on Tuesday, as several MPs and the speaker of the house also came under fire from the country’s main state-owned media institution for attacks on journalists that criticize the state.

“Journalists who do not respect this parliament will be beaten with an old shoe,” MP Mortada Mansour threatened during a parliamentary session on Tuesday to discuss critical articles recently published by the privately owned Al-Maqal newspaper and the state-owned Al-Ahram newspaper.

A majority of MPs voted in the same session to refer Ibrahim Eissa, chief editor of the privately owned Al-Maqal newspaper to the prosecutor general, claiming that he deliberately sought to tarnish the image of Egypt’s parliament.

Eissa was pushed to resign from his TV talk show in January following complaints from MPs, including parliamentary speaker Ali Abdel Aal, that he made negative and illegal comments about parliament.

Abdel Aal launched a scathing attack on Monday against the state-owned Al-Ahram Foundation and its board of directors, calling them “infantile polemics,” and commenting, “There is a newspaper that is criticizing us, namely Al-Ahram, which the state funds, yet which cannot manage to generate profits, despite its ownership of several companies and a printing press. Unfortunately it is plagued with an administration that does not operate according to economic standards, while it distorts the truth.”

Al-Ahram issued statements in response on Tuesday and Wednesday in defense of its institutions and press freedoms in Egypt. Its Editor-in-Chief, Mohamed Abdel Hady Allam, published an opinion article on Wednesday, “The dignity of Al-Ahram and parliament,” writing, “It seems that the concept of the relationship between the media and state authorities has become clouded and confused among some state officials. There are some who consider national newspapers should be subject to those in power.”

Allam argued that Egypt’s media is in the public domain and should serve its citizens, rather than being a tool for the nation’s executive powers. On Tuesday, the newspaper hit back at Abdel Aal’s claims it is losing revenue and saying, “The Egyptian people fund all state institutions, including the House of Representatives.”

On his personal Facebook account Monday, Naggar said Al-Ahram is the media giant of the Arab world, and is bigger than those who seek to slander it. He stressed the role of independent media should be to monitor and critique state officials and to expose truth.

Chief editor of Al-Ahram, Hesham Younis, called Abdel Aal an “angry elephant in a glass shop” on his personal Facebook account, stressing that he derives his authority from the public and can therefore be held accountable for what he says.

Abdel Aal handed the floor on Tuesday to staunchly pro-military MP Mostafa Bakry, chief editor of Al-Osbou’ newspaper, who called for the referral of Naggar and Eissa to the prosecutor general. Bakry argued that Eissa should be prosecuted for alleging parliament is being manipulated by the National Security Agency, constituting an attack on a state institution.

In response to Eissa’s referral to the prosecution, Al-Maqal sarcastically awarded parliament its own Oscar for “best children’s cartoon” as the 89th Academy Awards were taking place in the US.

Member of the Journalists Syndicate board Khaled al-Balshy told Mada Masr Abdel Aal’s comments about Al-Ahram are “disgraceful” and show a clear disdain for a seasoned publication like the 140-year-old newspaper.

Abdel Aal should take a moment to ask himself where the budget for his armored cars comes from, and should remember that it is the taxpayer that funds them, Balshy said, adding that he should also focus more on things like laws that protect the poor.