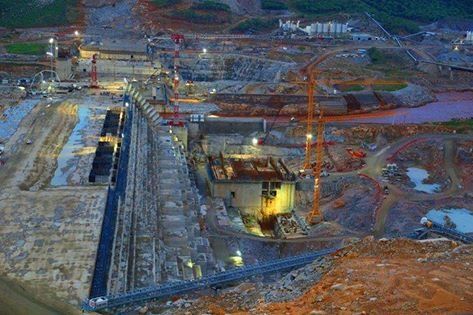 Ethiopian authorities announced Monday that they had increased the production capacity of the Grand Ethiopian Renaissance Dam (GERD) on the Nile by 450 megawatts, causing some alarm downstream in Egypt.

The dam was to have the capacity to produce 6,000 megawatts of electricity, and GERD authorities told the Ethiopian News Agency on Monday that the increased capacity is due to the improvement of 14 of its 16 turbines.

Egyptian and Sudanese authorities involved in the initiative say they were not informed of the additional 450 megawatt capacity of the dam, according to the state-owned Al-Akhbar newspaper, which added that both countries would be requesting further details in the coming days.

When completed, the dam will be the largest hydroelectric power plant in Africa, and one of the largest of its kind in the world. It was estimated in 2016 that the process of filling the dam with water (approximately 74 billion cubic meters) may take between five to 15 years.

The latest developments have caused some alarm in Egypt. Pro-government author Mostafa al-Fiqi wrote an opinion article in the state-owned Al-Ahram newspaper arguing that the dam would convert a share of Egypt’s water into electricity for other countries, impacting agricultural production. While Fiqi made it clear he doesn’t oppose Ethiopia’s ambitions for development, this “must not prejudice Egypt’s historic rights to its share of the Nile waters,” he added.

Gebremichael, however, stressed that improvements to the power-generating capacity of the dam would not affect the water flow of the river. “There will be no harm inflicted on countries downstream,” he said.

Although Ethiopia agreed to share all dam blueprints with Egypt and Sudan in 2011, it is clear there have been some breakdowns in communication since then.

A French firm was contracted to assess the impact of the dam on all countries involved, and is due to present its report to the tripartite committee at the end of March before they convene in April.

But while the dam has caused alarm among some Egyptians, others are stressing the need to look beyond the dam to secure Egypt’s water in the future.

“We have to look for alternatives and other methods to move away from water scarcity and poverty,” Former minister of Irrigation and Water Resources, Mahmoud Abu Zeid, told Veto newspaper.

Topics
Related
agriculture policy
Egypt decreases areas for rice cultivation amid fears of water scarcity
Egypt is planning to dramatically decrease the amount of land allocated to rice production next year.
Renaissance Dam
Ethiopia cancels dam meeting
A meeting in which contracts were due to be signed with a French firm to conduct studies about the implications
water scarcity
Water shortages bring suffering to Egypt’s countryside
Nada Arafat | Egypt, once celebrated as the gift of the Nile, is in the grips of a serious water crisis. With a rising
Nile water crisis
Minister of irrigation warns of water scarcity
Water Resources and Irrigation Minister, Hossam Moghazy, warned on Saturday that Egypt is experiencing