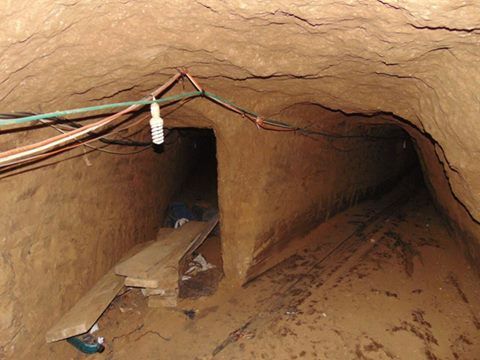 Egypt has faced criticism from Gaza authorities after three Palestinians died and five were injured on Friday while carrying out repair work on a Gaza-Egypt smuggling tunnel demolished by the Armed Forces days earlier.

Despite criticism, the military announced the demolition of another Gaza-Sinai tunnel on Sunday.

Egypt has typically destroyed the smuggling routes using tactics such as detonation, or flooding them with sewage or seawater. However, the Gaza-based Hamas organization claimed that the latest deaths were caused by poisonous gas pumped into the tunnel. Several international news outlets have also reported the use of toxic gas.

The London-based Saudi Arabian Asharq Al-Awsat newspaper wrote on Sunday that the three casualties may have been caused by the inhaling of toxic fumes associated with the explosives used by the Armed Forces to demolish the tunnel.

Hamas issued a statement on Saturday following the funerals of the three who died, offering condolences to the families of the “martyrs of the siege” who they claimed were “killed by poisonous gas during their struggle to earn a living, under the choking siege suffered by the residents of the Gaza Strip.”

The statement calls on Egyptian authorities to permanently open the Rafah border crossing, Gaza’s only legal point of entry and exit into Egypt, adding that Hamas “condemned this tragic incident, while emphasizing that there is no justification for the Egyptian authorities’ continued use of such hazardous tactics.”

The Egyptian government has made no official comment on the accusations that poisonous gas has been used to deter Palestinians from entering or repairing the tunnels.

However, the Armed Forces spokesperson posted a statement on Facebook on Sunday regarding the demolition of one of the larger tunnels. It cites Colonel Tamer al-Rifai as saying that the body of the “key tunnel” included three control rooms, generators, electricity panels, communication speakers, an oxygen pipeline and electric cables.

The spokesperson added that the Armed Forces is pushing ahead with “efforts to detect and destroy the remaining tunnels” in order to prevent militant armed Islamist elements and criminal elements from using them for smuggling or infiltrating into Sinai.

Egypt has spent the past two and half years establishing a buffer zone along the Gaza-Sinai border in the city of Rafah, in hopes of isolating and defeating militant operations led by armed Islamist groups based in North Sinai. One such group is the Islamic State-affiliated Province of Sinai.

Egypt and Israel have maintained a tight grip over Gaza’s border crossings and seaports since Hamas’ electoral victory in 2007.

According to 2016 figures published by Gaza’s Interior Ministry, the Rafah border was shuttered for a total of 324 days that year. According to the ministry 26,431 individuals were allowed to cross, and travel beyond the Gaza Strip, 14,431 were allowed into Gaza and 1,665 were prevented from entering or leaving the Palestinian territory.

The ministry also reported that the Rafah border crossing was shuttered for 333 days in 2015.

Gaza officials have posed to Egyptian and Israeli authorities that opening the border would eliminate the need for smuggling tunnels, which currently function as lifelines to Gaza’s 1.9 million inhabitants. They are used to smuggle essential consumer goods and materials for reconstruction, in addition to weaponry, into the Gaza Strip.

Palestinian news outlets have reported that between 160 and 400 Palestinians have died while digging or using the tunnels.

AD
You Might Have Missed
Mugamma revisited: Reimagining the building and the square
Carbon Colonies & A Green New Deal
If they steal Sheikh Jarrah
Where do old lesbians go to die?
AD

Topics
Related
Hamas
Hamas leaders on first official Cairo visit since 2013
A Gaza-based source said the visit is the latest development in a "positive relationship" between Hamas
Palestinians
Palestinians of Egypt: Collateral damage since 2013
Heba Afify | On their international day of solidarity, Palestinians of Egypt recount hardship and social aggression.
Gaza tunnels
4 Palestinians missing after Egypt-Gaza tunnels are flooded
Palestinian civil defense missions were deployed for the third day on Tuesday to search for four Palestinian
Egypt-Israel relations
Egypt warms up to Israel
Mohamed Hamama | Despite talk about the centrality of the peace process, the meeting was less about Palestine and more