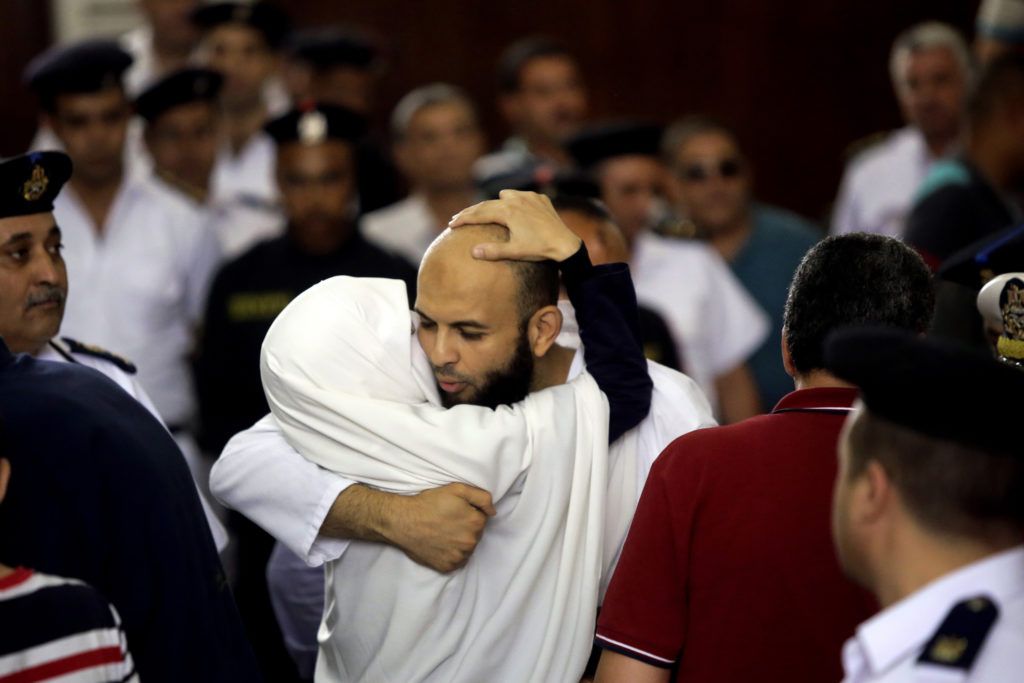 A Cairo criminal court sentenced defendants in the Rabea al-Adaweya sit-in dispersal case to one year in prison for contempt of court for shouting “murderer” during a police officer’s testimony on Saturday. The ruling was issued against all but 11 of the defendants in the case. Among those excluded was photojournalist Mahmoud Abou Zeid, known as Shawkan.

The court has also charged the defendants’ lawyers with contempt of court and referred them to the general prosecutor for investigation.

At the start of Saturday’s session the court refused the defense team’s request to play a video showing the dispersal of the 2013 sit-in. The defense registered their objection to this decision according to Mokhtar Mounir, one of the lawyers defending Shawkan, suspending the session for deliberation.

The court subsequently called the lawyers to the deliberation room to hear the prosecution’s witnesses. Mounir told Mada Masr that the defense team objected and demanded they be heard in the courtroom, causing the court to ask defendant’s families to leave.

As one of the prosecution’s witnesses, an officer in charge of the Central Security Forces unit that dispersed the sit-in, began his testimony one of the defendants yelled: “Murderer! Murderer!” They were subsequently issued one year sentences for contempt of court.

The defense team representing all but 11 of the defendants, among them Shawkan, were called once more into the deliberation room. However, they refused to comply with the request in protest of the one year sentences, leaving the session.

They were also charged with contempt of court, and referred to the general prosecutor for investigation.

“This decision is not legally correct. A jail sentence should not be issued before investigating the defendants and listening to their defense, or permitting lawyers to defend their clients. None of this happened. The ruling was issued immediately,” said Mounir.

He added that the referral of the defense team to the general prosecutor is illegal according to Egypt’s criminal law and the laws governing trial procedures and the legal profession. “What should have happened is that the judge should have submitted a memorandum to the appeals court recounting the events of the session and outlining the contempt of court charge,” the lawyer said. “The appeals court would then determine a court to investigate and rule on the charges, which did not happen.”

There are a total of 739 defendants involved in the case, several of whom were prominent members of the banned Muslim Brotherhood group or affiliated organizations. They face charges including forming an illegal gathering, vandalism and premeditated murder among others.

Implicated in the case is 28-year-old freelance photojournalist Shawkan who was arrested alongside two foreign journalists while documenting the dispersal of the Rabea al-Adaweya sit-in. Although the other two were soon released he remained in detention for over 700 days before facing charges. According to a report issued by Amnesty International he has faced torture and ill-treatment while in jail, and his lawyers have been denied full access to key documents in his case.

The case dates back to August 14, 2013 when security forces violently dispersed a sit-in at the Rabea al-Adaweya Square in Cairo. The sit-in began on June 28 to protest the ouster of former Islamist President Mohamed Morsi. Though lead by the Muslim Brotherhood, the sit-in included other non-Islamist supporters.

According to a report released by Human Rights Watch (HRW), the violent dispersal of the sit-in led to the killing of at least 817 individuals, “and more likely at least 1,000.” HRW stated that this may constitute “crimes against humanity.”