When progressives call abortion murder In defense of a woman's decision to bear her child, it was progressives who condemned abortion

When a young Egyptian woman took to Facebook posting a picture of herself with her baby from an unofficial “customary” marriage and a defense of her decision to keep him, social media was ablaze. Opinions were split between those supporting 27-year-old Hadeeer Mekawy’s right to have children outside the context of a marriage and those against it.

What was most noticeable about these discussions is the way that those supporting her, often known progressive figures, did so through condemning abortion.

Hadeer had reportedly been married through customary marriage for many years but when she got pregnant, her husband left her. Women in Egypt in this situation opt for abortion or bearing the child and placing them in an orphanage, as under Egyptian law these are illegitimate children and can’t be registered. Hadeer took the rarer path of bearing her child, who she named Adam, and taking to the courts to prove her son’s paternity.

Women are for the most part expected to practice sex only within the framework of a documented marriage. Those who break these social norms are usually either condemned or considered naïve victims of deception.

It is this designation as a victim that makes it possible for a woman to be re-admitted into social acceptability, but it is a form of denial because it falsely makes victims of women and denies them their sexual desire, seen as the prerogative of men exclusively.

Hadeer resisted the victim label. Responding to the barrage of judgement she had received, she said it was a sick society in which customary marriage is condemned as sinful and in which families value superficial concerns about a suitor more than the actual human being who will marry their daughter. She reasserted her reproductive rights and declared that all the judgements directed at her “mean nothing to me, because I’m convinced of every step I take and if I’m not convinced, it’s my life, and whether I chose rightly or wrongly, the decisions are mine and I didn’t ask anyone else to bear the consequences.” She ends her post declaring that she is proud of herself and pities those who have so much evil inside them.

This sort of agency does not simply contradict the perception of women as passive in sexual relationships, it also hinders their reintegration into the social system. As such, it was hard for some to maintain a supportive defense for Hadeer Mekawy, who did not present herself as a victim in a strong enough manner that would have satisfied society’s requirements for the kind of drama that makes her story socially acceptable.

The subsequent discussions on Hadeer’s case, however, were surprising because those citing the view that abortion is murder were not the conservatives, as expected, but the progressives. 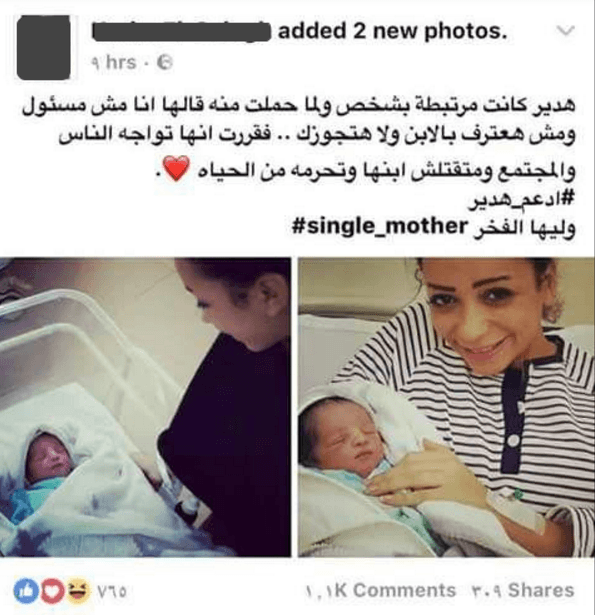 “Hadeer was in a relationship with someone and when she got pregnant he told her it was not his responsibility and he wouldn’t acknowledge the child or marry her… So she decided to face people and society, and didn’t kill her child and forbid it from life. #SupportHadeer” 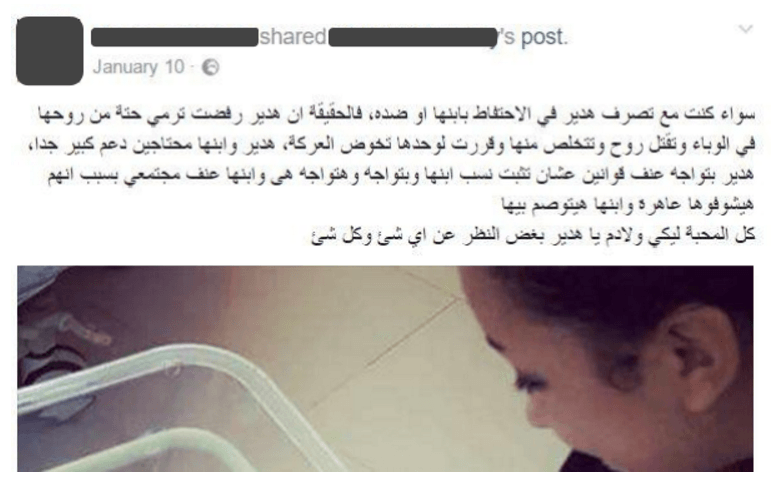 “Whether you are in favor of Hadeer’s keeping her baby or not, the truth is that she refused to throw away a piece of her soul amid the epidemic and kill a life and get rid of it, deciding to go through this fight alone. Hadeer and her son need a great deal of support. Hadeer is facing the violence of laws to prove the paternity of her son, is facing and will face societal violence as they perceive her as a prostitute and her son will have to take a part of that. All the love for you and Adam, Hadeer, regardless of anything and everything.”

This ridiculous stance will be added to the list of the most disgraceful positions taken by the progressive current in Egypt. In order to normalize having a child outside of a married relationship, they resorted to an approach that is both antiquated and laden with value judgment. In doing so, they did not just deny the rights of other women to refuse pregnancy but in fact labeled them “murderers.” In other words, they only allowed women to exit the framework of marriage by their entry into the framework of motherhood.

In order to normalize having a child outside of a married relationship, they resorted to an approach that is both antiquated and laden with value judgment

That Mekawy herself proclaimed, “I didn’t murder my child in order to appear in your eyes as the good clean girl,” should not let those who define themselves as progressive off the hook.

The right to life: pregnancy as a means of punishment

While opponents of abortion proclaim that the right to life starts with a fertilized ovum, this is a narrow idea of what the right to life might mean. This right should include the right of a child to a proven paternity, and the issuance of the necessary official documents that prove the relationship between the child as a citizen and the state.

In my research on abortion in Egypt over the past months, I have seen women seeking abortion for a number of reasons, among the most prominent of which is that they are forced to continue with their pregnancy as a sort of punishment for their engagement in sex.

Those who consider pregnancy a suitable social punishment for a woman for engaging in a sexual act make no such demands of a man who engages in the same act. The man does not bear social stigma for sex outside the framework of marriage and, without a father’s name for the birth certificate, the child cannot be registered — and as such cannot access various state services such as education — facing a lifetime of stigma and discrimination.

In the online discussion around Mekawy, it seems that conservatives found abortion more preferable than demanding from men that they engage in the consequences of sex outside of marriage through proving paternity or compliance with the duties of fatherhood. But it was clear that they are disturbed by women’s exercising control over their bodies — condemning her whether she chooses an abortion or pregnancy.

Conservatives condemn a woman such as Mekawy either way, and progressives should support her either way. But in declaring their support for Mekawy by proclaiming abortion as an act of murder, these progressives are complicit in the stigmatization and suffering of women who seek abortion in Egypt.

Abortion as it actually exists

According to the Penal Code (Articles 260-263), both a woman seeking abortion and the person who performs the procedure or prescribes abortion-inducing drugs may be punished by hard labor.

Prohibition doesn’t prevent abortions from taking place, but makes the framework for abortion unsafe. It is logical to assume also that the possibility of receiving a sentence of hard labor for abortion would take a psychological toll on women. That is apart from the psychological burden for those women who seek abortion under forced circumstances.

Women often undergo abortions through surgery or what might be termed home methods.

There are a small number of physicians who perform abortions without reporting the women, enabling them to raise the price, making the safest and healthiest option of surgery inaccessible to most women. In cases where there is not a reasonable degree of cleanliness and sterilization, and if the woman is subjected to infections or complications, she cannot hold the doctor to account because she has committed a crime in the eyes of the law. Sometimes physicians use their power to blackmail women, demanding large sums of money or sexual favors.

Women for whom surgery is not an option often induce an abortion through the use of medication that causes ulcers. As these drugs are not available at most pharmacies, those who do stock them are able to raise the price of a pill that should cost LE10 to LE100. The use of these drugs does not always work. Women may also attempt to induce an abortion through the use of herbs or alternative medicine, or jumping up and down and lifting heavy objects, or inserting sharp tools such as needles or spoons into her vagina to scrape the uterus. In some cases, a woman may resort to beating to induce an abortion.

Whatever the method, if a woman suffers complications such as excessive bleeding, she cannot seek medical assistance unless she is certain that she won’t be reported to the authorities. Healthcare is therefore prohibited unless the woman in question has enough money to go to a private health center.

The dilemma and experience of “loss” entailed in abortion differs from one woman to another according to their emotional experiences of pregnancy. But all of them experience abortion in an unsafe and illegal framework burdened with emotional turmoil because of the required secrecy, in addition to the difficulties in accessing abortion.

In the end, and despite the just goal of the progressives in this battle, their discourse was problematic and fraught with issues. Whether an abortion is a result of a decision or the woman was coerced into it, it is a harsh enough experience for the woman that it shouldn’t be accompanied by stigma.

AD
You Might Have Missed
Where do old lesbians go to die?
Carbon Colonies & A Green New Deal
What we talk about when we talk about trees
Mugamma revisited: Reimagining the building and the square
AD
Ghadeer Ahmed
11 articles on Mada

Topics
Related
divorce laws
Egypt’s child custody laws: How to reform?
Mai Shams El-Din | A controversial ammendment to Egypt’s child custody law has brought reform into the spotlight
Mother's Day
Motherhood as choice
Dina Hussein | It was one of those rare occurrences when I was not too tired to make babysitting arrangements, dress
gender equality
Fight the man: Laws that help women and laws that hurt them
Pesha Magid | Although Egypt has signed many international agreements pledging to protect and guarantee women’s equality
On contentious politics
The ‘legal woman’: Sexual violence, the state and the law
Bahaa Ezzelarab | On June 5, 2014, an amendment to the Egyptian Penal Code saw the introduction of harassment as a definitive