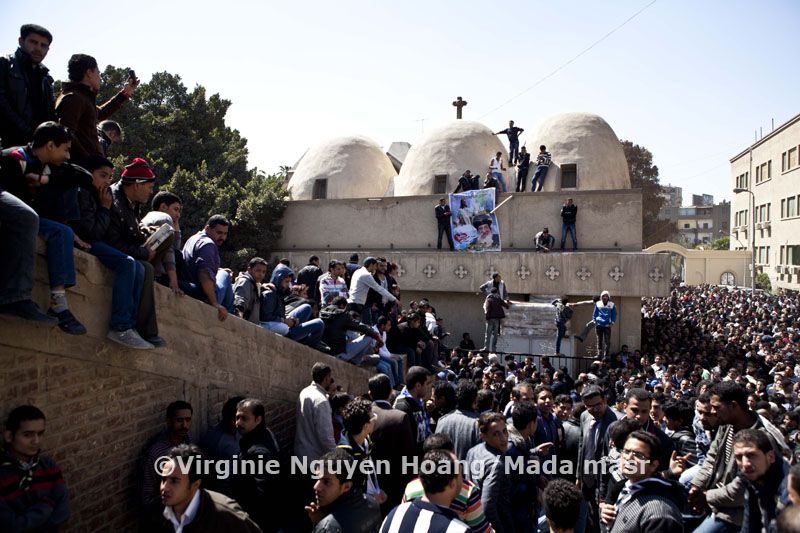 Militants killed another Coptic resident of Arish on Thursday, bringing the number of victims in the latest wave of sectarian violence against Copts in North Sinai to seven.

After breaking into his house in the Zohour neighborhood in North Sinai’s capital, militants murdered an unidentified Coptic man in front of his family, a local source told Mada Masr.

There are conflicting reports on the fate of the family following the murder, the source added, with some reporting that militants followed the family after it fled and were able to capture and kill the victim’s daughter, while others claim that it was his son who was kidnapped.

The murder comes a day after the bodies of Coptic resident Saad al-Hakim and his son Medhat were found in Arish, North Sinai MP Hossam al-Refai confirmed to Mada Masr.

The Coptic Orthodox Church issued a statement on Friday condemning attacks on Copts in North Sinai, saying that the violence threatens Egypt’s “national unity and attempts to break our united stand as one front against terrorism.”

The church is responding to the latest attacks in coordination with state officials, the statement added.

Church officials told the BBC that around 40 families have fled Arish to the nearby city of Ismailia in the last two days.

Multiple incidents of sectarian violence have taken place in North Sinai throughout the last month. Local sources reported the murder of veterinarian Bahgat William outside a pharmacy he owned two weeks ago, while another Coptic resident, Adel Shawky, was reportedly killed on the same day. Last week, Gamal Tawfik, a Coptic teacher and shoe trader, was killed by militants in the middle of a busy market in Arish.

This spate of attacks on Copts began with the death of Coptic vendor Wael Youssef inside his shop in a commercial area in Arish at the end of January.

Topics
Related
sectarian violence
2 Egyptian Christians murdered in spate of sectarian attacks in North Sinai
There has been a string of attacks killing 6 Christians in North Sinai in the last couple of months
St. Peter and St. Paul Church bombing
Islamic State releases video of man alleged to be responsible for December church bombing
The Islamic State released a video featuring a statement from the man they allege is responsible for
attacks on Copts
North Sinai Copts face death or displacement in absence of security and tribal protection
Heba Afify | The circle of Coptic Christians in danger of targeted attacks widens in the absence of protection
sectarian violence
Suspects implicated in assault on Coptic Minya woman referred to trial
Those implicated in the May 2015 assault on an elderly Coptic woman in Minya were indicted on Wednesday