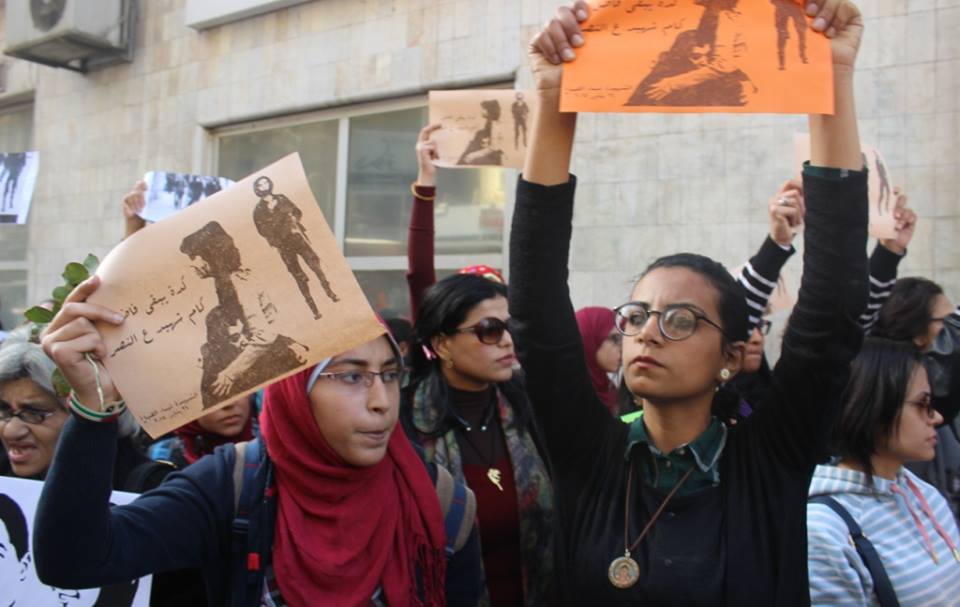 An Egyptian court adjourned the retrial of the policeman accused of killing activist Shaimaa al-Sabbagh on Sunday, the verdict is set to be announced on June 19. She was killed during the dispersal of a peaceful protest in 2015.

The judge’s decision to keep Lieutenant Yassin Salah Eddin, the police officer accused of fatally shooting Sabbagh, in custody signals that an indictment could be in store for him, lawyer Ali Suleiman told Mada Masr.

Last February, the Court of Cassation overturned a 2015 ruling sentencing Salah Eddin to 15 years in a maximum security prison for fatally shooting Sabbagh. This decision initiated the retrial currently underway.

“The court’s decision to keep the officer in custody after he was freed by the annulment of the first ruling makes it extremely improbable he will be acquitted,” Suleiman said, adding that Salah Eddin’s initial sentence could possibly be reduced.

He could face a maximum sentence of 15 years if the court rules that the killing was intentional, according to the lawyer. An indictment would see Salah Eddin serve from 3 to 7 years.

Sabbagh’s lawyers submitted a request to change the charges from beating the protester to death to premeditated murder in the case’s initial trial, but the request was denied by the court.

Sabbagh was killed  on January 24, 2015 while marching with members of the Popular Socialist Alliance Party from Talaat Harb Square to Tahrir Square, carrying flowers to place on the memorial for the martyrs of the 2011 revolution on the fourth anniversary of the protests that toppled former President Hosni Mubarak. During the march, Sabbagh was shot to death by a police officer as security forces attempted to disperse the demonstrators.

The report issued by the Forensic Authority states that she was shot from a distance ranging from three to eight meters, causing lacerations in her heart and lung tissue resulting in her death.

After Sabbagh’s death 17 party members were arrested on charges of violating the Protest Law by organizing a rally without the requisite security clearance. The charges were later dropped.

Her murder provoked widespread local and international condemnation as a serious violation of the rights of peaceful assembly and expression. The uproar caused by the case was reflected in a speech by President Abdel Fattah al-Sisi that year, in which he called her “the daughter of Egypt. And my daughter.” He gave his condolences to her family, assuring them that whoever was responsible for her death would be punished.

Hundreds of protesters were killed in clashes with police during the events on the 25 January revolution. Although several police personnel have been taken to trial, none have been indicted. If Salah Eddin is indicted he could appeal his case one more time.