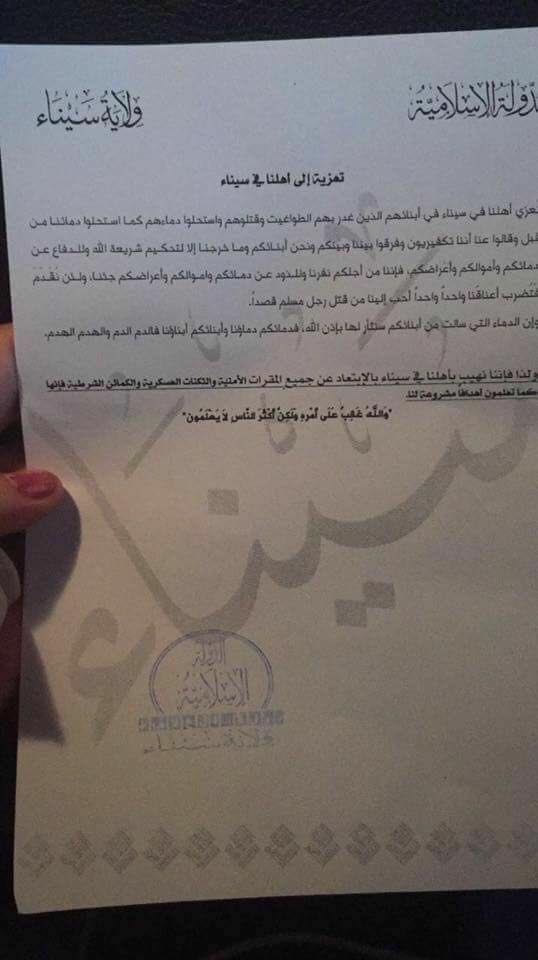 Islamic State-affiliated militant group Province of Sinai allegedly distributed a statement to the public in the North Sinai city of Arish, offering condolences for unarmed civilians killed in violence with the state in recent years, local sources told Mada Masr.

The written statement, which was reportedly distributed at a bus stop in the city on Sunday night, held the state responsible for civilian casualties who died as result of the government’s conflict with the militant group and promised retribution for those who were killed.

The statement — which could not be independently authenticated by Mada Masr — also warned civilians against approaching security buildings, considering them “legitimate targets” for the group.

“We offer condolences to our people in Sinai for their sons who fell prey to the deception of the oppressors and were killed … They came between us, but we are your sons and we only come out to implement God’s law and defend your blood, wealth and honor,” the statement read.

An eyewitness, who spoke to Mada Masr on the condition of anonymity, reported that he was riding a microbus when he saw two masked men standing confidently at a bus stop in the Refai district, one of Arish’s busiest areas. “They were guarding two others who distributed the statement at the bus stop. Everyone was running away in fear of a possible confrontation if security arrived,” he said.

The masked men then fled the scene, minutes before security forces arrived at the site.

A local activist explained to Mada Masr that this incident was conducted in a similar manner to abductions and killings carried out by Province of Sinai militants in the city.

“Usually they complete the job in 10 minutes, before hiding in a side street to take off their masks and change their clothes and then mingle easily with the people. They usually flee the scene before security arrives,” the activist said.

The statement comes amid escalating violence in the city. Local reports have detailed the death of five civilians after a missile targeted a house in the border city of Rafah, as part of a series of attacks that left dozens of civilians dead.

A popular committee in Arish announced plans to instigate civil disobedience by calling on citizens not to pay their electricity bills in protest of the death of 10 civilians at the hands of security forces for their alleged involvement in terrorist activities, which sparked a wave of anger among local citizens recently. Arish residents claimed that the victims were arrested by security and forcibly disappeared months before their death, and also protested the detention of hundreds of civilians without due process.

Topics
Related
attacks on military
5 soldiers killed in militant attack in central Sinai
Five soldiers were killed by militants in Sinai, according to military spokesperson Tamer al-Rifai
South Sinai
New restrictive measures to enter Sinai
New measures on travel to Sinai require evidence of a place of residence
Province of Sinai
176 defendants in Province of Sinai case referred to military trial
Egypt’s military prosecutor referred 176 alleged members of the Province of Sinai to military court
St. Peter and St. Paul Church bombing
3 questions raised by the Islamic State’s alleged involvement in the church bombing
Omar Said | What does this signify about the group's Egypt operations?