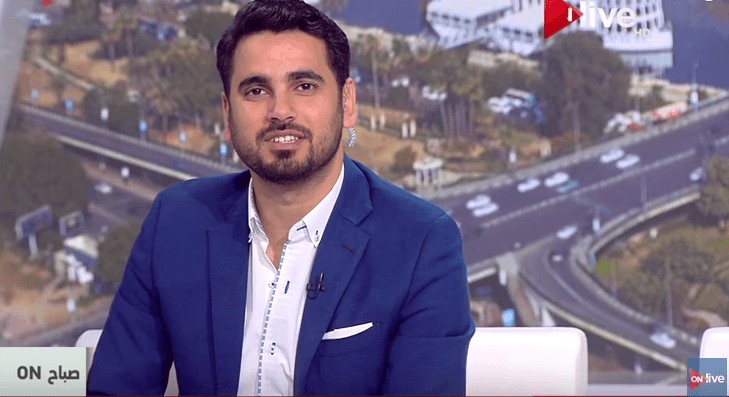 The administration of the privately owned ONtv channel has suspended the contract of anchor Khalid Tallima without providing an explanation, according to a Facebook post published by the anchor on Sunday.

A source familiar with the situation told Mada Masr that a recent disagreement arose between Tallima, who hosted “Sabah ON” (ON’s morning) aired on the ONtv Live network, and network head Ahmed Abdel Tawab over the channel’s editorial policy. They claimed this is the reason behind his suspension.

The source added that conflict with the sacked anchor recently escalated due to his stance on the state of rights and freedoms in Egypt, and his opposition the land transfer deal between Egypt and Saudi Arabia concerning the two Red Sea islands Tiran and Sanafir.

According to the privately owned Al-Masry Al-Youm newspaper, Tallima’s contract with ONtv was scheduled to expire next April.

Mada Masr reached out to representatives from the channel, however they were not available for comment at the time of publishing.

Tallima is known for his critical position on the government, and was formerly a member of the Revolution Youth Coalition, which was formed after the ouster of former President Hosni Mubarak in 2011. He was also appointed as deputy sports and youth minister in 2013.

He vocally opposed the transfer of Tiran and Sanafir to Saudi Arabia, and celebrated a final ruling issued last month, invalidating the agreement. He called on President Abdel Fattah al-Sisi to release all prisoners who were jailed for opposing the deal.

“To everybody who was jailed for one minute or one hour for the sake of this cause, I say on behalf of all Egyptians: I’m sorry,” Tallima said during an episode of Sabah ON.

He has also previously criticized the jailing of government critics and freedom advocates, including lawyer Malek Adly and novelist Ahmed Naji, who have both since been released. He also slammed a similar decision to suspend outspoken TV anchor Ibrahim Eissa from the privately owned “Al-Qahera wal Nas” channel last month.

Tallima’s suspension follows speculation concerning his future with the channel after it was bought by Abu Hashima last year. Following the acquisition he said: “No one has told us if we are staying or leaving, but we will remain here so long as we respect the channel’s editorial policy, and they respect our ideas and affiliations.”

The incident is one in a slew of recent suspensions of the channel’s critical voices, the most prominent of whom was Lebanese anchor Lilian Dawoud, who was forcibly deported from Egypt hours after her contract with ONv was suspended. Her deportation occurred one month after the channel was acquired by Abu Hashima, who is known for his links to state security and support of the government.

ONtv was at the forefront of local media opposition against the Muslim Brotherhood’s rule in 2013 and openly endorsed former President Mohamed Morsi’s ouster, vocally supporting the state and the political leadership of President Sisi. The channel’s editorial line has forced two of its other leading anchors, Reem Maged and Yosri Fouda, to go off-air.

Immediately before the channel was sold it underwent a rebranding process, shifting its focus from political coverage to entertainment and sports. Hashima’s ownership of ONtv raised concerns about the increasing control pro-government businessmen have over Egypt’s media landscape. In addition to the Youm 7 newspaper and ONtv, the businessman has also recently acquired the independent Sawt Al-Omma newspaper, the weekly entertainment newspaper Ain and Dot Masr news website.