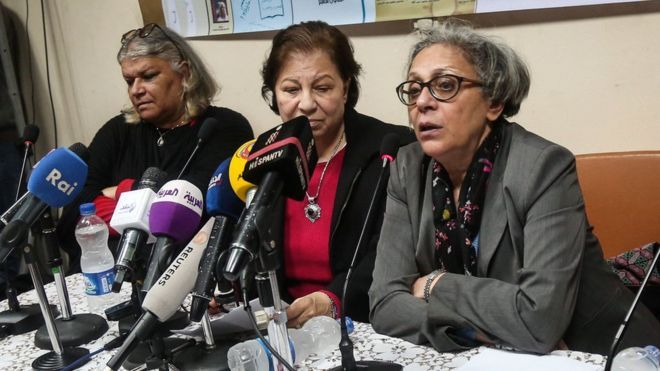 A sizable police force converged on Al-Nadeem Center for the Rehabilitation of Torture Victim’s headquarters in downtown Cairo on Thursday and forcibly closed the building, according to the center’s co-founder Aida Seif al-Dawla.

It is not known whether the police were enforcing the Health Ministry’s February 2016 closure order, whose legality has been criticized by human rights lawyers.

Seif al-Dawla told Mada Masr that the police deployed on Thursday sealed the headquarters’ doors with red wax, which were closed for the center’s weekend. Police also detained the building’s security guard and escorted him to the nearby Azbakiya Police Station where he is being accompanied by lawyers, she added.

The shuttering comes one year after the Health Ministry issued a closure order, which was contested and followed by the deployment of a task force that attempted to enforce it. Despite the attempt, the doctors and the center’s staff continued to carry out operations.

The Health Ministry argued at the time that the center violated the law by shifting its focus from providing medical services to advocating and working on human rights issues.

Al-Nadeem published a statement in response, asserting that the wider organization does not fall under the supervision of the Health Ministry. Al-Nadeem operates a separate clinic for psychiatric evaluation that holds the requisite permits from the Doctors Syndicate, which is independent from the Health Ministry’s oversight. The wider organization, it explained, conducts other activities, including providing training and issuing reports.

“If the ministry means by human rights activity, [exposing] ‘torture and police oppression of members of terrorist organizations,’ this activity is done by the center, not the clinic, which is none of the ministry’s business.”

After the April closure attempt, Seif al-Dawla said the government’s actions are “a systematic attack against rights and freedoms in Egypt.” She added that the closure is a politically motivated decision that targets Al-Nadeem due to its efforts to expose torture, oppression and violations.

“If they want to consider us a human rights organization, and if this is the accusation, let them say it out loud, then it will be our turn to reply,” Seif al-Dawla told Mada Masr at the time.

Authorities at Cairo International Airport banned Seif al-Dawla from international travel in November without providing her prior notice, a step that is largely believed to be connected to a judicial investigation into accusations against a number of human rights organizations of receiving illegal foreign funding.

“This is a step within a larger context, where there is crackdown on NGOs,” Seif al-Dawla told Mada Masr after she was prevented from boarding her plane.

Weeks before Seif al-Dawla was banned from travel,  Al-Nadeem was notified by bank employees that their bank account had been frozen following a directive from the Central Bank of Egypt. The freeze was lifted a few days later.

Al-Nadeem was established in 1993 and has been tasked with providing legal and psychological support for victims of torture and violence, especially inside prison and detention facilities, as well as documenting human rights violations committed by police.

Topics
Related
internet surveillance
Civil society organizations, activists targeted by 2-month-long hacking campaign
An EIPR report has revealed that civil society organizations and activists have been the target of a
2016 year enders
While a bad year for civil society, all vow to find ways to continue
Lina Attalah | Facing intensifying restrictions, which may hurt the rule of law most, civil society workers vow to continue
travel bans
Authorities ban rights defender Aida Seif al-Dawla from traveling
Co-founder of the Al-Nadeem Center for Rehabilitation of Victims of Violence was issued a travel ban
NGO foreign funding case
Court freezes assets of rights defender Azza Soliman after banning her from travel
Soliman told Mada Masr she was informed of the decision by the bank not by authorities.